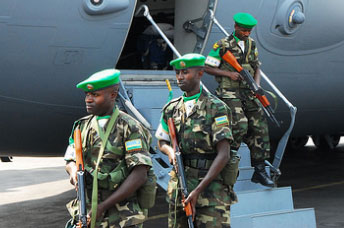 Yesterday, the head of African peacekeepers in the Central African Republic (CAR) declared the anti-balaka, a violent militia that is party to the current conflict, “enemies” of the peacekeeping force, adding another layer to the complex and multifaceted crisis that has killed thousands and displaced a quarter of the country’s population.

The crisis, which first caught international attention in March 2013 when Seleka rebels ousted CAR President François Bozizé, led the United Nations Secretary-General to announce in February a six-point initiative for CAR, followed in March by a proposal to transform the African-led International Support Mission in the Central African Republic (MISCA) into a UN peacekeeping operation. While the African Union has acknowledged the need for a comprehensive UN peace operation, it has also recommended several elements to be considered ahead of the deployment of the new mission, some of which can prove useful in overcoming the recurring crises in CAR.

However, beyond the necessary coordination of the UN Security Council’s partnership with an increasingly assertive regional organization, sustainable peace and stability in CAR will remain as elusive as in the past unless national actors demonstrate the necessary political commitment that will ensure the sustainability of all regional and international efforts poured into the country to address the current crisis.

Despite the deployment of the 6,000-troop strong MISCA in December 2013, supported by 2,000 troops of the French Operation Sangaris, the situation in the Central African Republic remains extremely volatile. A violent attack led by the anti-balaka, a mainly Christian militia, at the end of last year, followed by increased sectarian tensions and targeted attacks on Muslim populations, has led to massive human rights violations including cases of summary executions, lynching, persecution and abductions, sexual violence, as well as looting and destruction of property. MISCA itself has deplored the killing of 21 of the African peacekeepers deployed in the country.

This human rights situation is worsened by increased risks of a humanitarian catastrophe, due to a looming food crisis and the extreme vulnerability of over 650,000 internally displaced persons across the country, 290,000 CAR nationals who have sought refuge in neighboring countries, and around 15,000 Muslims reportedly trapped in Bangui and other areas of CAR’s south and northwest regions.

To address the crisis that threatens peace and security not only in the fragile country but also across Central Africa and the Great Lakes region, United Nations Secretary-General Ban Ki-moon presented a six-point plan designed to stop the violence and protect civilian populations; lay the groundwork for the handover to a UN peacekeeping force; provide logistical and financial support for African troops on the ground; provide the CAR government with urgently needed assistance to restore law and order; accelerate a political and reconciliation process; and facilitate the delivery of humanitarian aid.

Building on his six-point initiative, the Secretary-General proposed in his March 2014 report to the Security Council the transformation of MISCA into a UN multidimensional peacekeeping operation of about 12,000 troops. Scheduled to take place only in September 2014 if approved, the deployment of the third UN peacekeeping operation in CAR over sixteen years, raises questions about the necessary lessons that can been learned from previous peacemaking, peacekeeping, and peacebuilding experiences in the country.

The need to learn from the past was highlighted by the African Union Peace and Security Council in its response to the proposed UN peacekeeping operation. The AU Peace and Security Council welcomed the deployment plans for a new UN peace operation, recalling that the African-led mission—which is expected to complete its mission within six to nine months—was deployed to facilitate the “initial stabilization phase” and “pave the way for a broader and more sustained international engagement.” The AU further emphasized the value added and specific contribution of its ongoing mission, which achieved significant progress on the ground despite various logistical and capacity challenges.

To consolidate these achievements, a number of considerations should, from a regional perspective, inform the transformation of MISCA into a UN peacekeeping operation. This includes drawing the necessary lessons from the recent transition from the African-led International Support Mission in Mali (AFISMA) to the UN mission there (MINUSMA); a learning process that entails maintaining a close consultation between the AU Commission and the UN Secretariat in defining the modalities of the transition. Such exercise also calls for the AU’s consultation both on the draft resolution that would establish the envisaged UN peacekeeping operation, and on the appointment of the leadership of the envisaged UN peace operation. Legitimate in most of its elements, the AU’s request also illustrates the increasing demand for recognition of its role in stabilizing volatile situations across Africa, a demand the UN Security Council is yet to fully address as the partnership between the two peace and security structures continues to evolve.

Besides learning from last year’s transfer from AFISMA to MINUSMA ahead of the transition from MISCA to a UN peacekeeping force, another element suggested for consideration by the AU is the need to promote national ownership of the peace efforts in the CAR.

Despite stronger capabilities and better resources, the UN mission is likely to face the same constraints as MISCA and the French operation Sangaris; and the future mission is not, by itself, in a position to solve all CAR’s problems. Thus, with the support of the international community—whose political efforts are accompanied by the International Contact Group on the Central African Republic—national actors have an important role to play in overcoming the complex and multifaceted socio-economic, governance and other challenges that have given rise to the cyclical crises in the Central African country. As such, it is their responsibility to identify the key priorities and local initiatives that could benefit from urgent international support, while also ensuring sustainability and ownership. These priorities were discussed at an informal meeting convened by IPI with a group of religious leaders from CAR on March 14, 2014.

For CAR faith leaders, urgent support and national political will must combine to restore security throughout the country, ensure the protection of civilian populations, and address the dire humanitarian situation. Ongoing disarmament, demobilization, and reintegration (DDR) efforts should also be strengthened; and the national army and security forces should be reformed following years of internal ethnic rifts for political purposes. Sending a strong signal to restore the judicial system and the rule of law throughout the country will help put an end to cycles of impunity that were facilitated by consecutive amnesty laws.

Moreover, CAR’s economic and social recovery can be supported by rebuilding schools and hospitals that were destroyed by the violence, facilitating the return of civil servants and farmers to the daily activities of life, and ensuring that demobilized youth are provided with the necessary economic opportunities that can prevent their re-enrollment into armed groups.

Building on existing civil society initiatives such as an interreligious platform established by CAR religious leaders to advocate for an end to the crisis by promoting reconciliation and nonviolence will further promote national ownership. Local initiatives seeking to develop truth-seeking processes from the village and community level through to a national truth, justice, and peace commission should be supported. Groups of women and youth mobilized to advance peace and reconciliation efforts in the country could also be provided with the necessary funding and capacity-building support that will ensure that Central Africans remain the lead actors of the combined efforts that seek to end the recurring crises and pave the way for sustainable peace, stability, and development in their country.