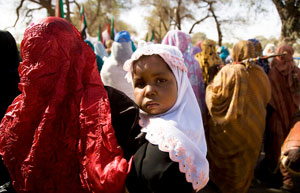 2015 will bring the expiration of the Millennium Development Goals (MDGs), one of which focused specifically on promoting gender parity: Goal 3. This week, delegates from the around the world are gathering at UN Headquarters to discuss the challenges and opportunities all eight goals have provided for women and girls—and how they could be addressed post-2015. That is the focus of this year’s Commission on the Status of Women (CSW), running from March 10th to 21st.

Last week, I spoke with Lakshmi Puri, Deputy Executive Director of UN Women and Assistant Secretary-General of the United Nations, about what she thinks the priorities and obstacles are when it comes to empowering women and girls and achieving gender parity. What follows is a condensed and edited version of our conversation.

Ms. Puri, as the 58th session of the Commission on the Status of Women gets started, what do you see as the gaps and achievements in implementing the Millennium Development Goals for women and girls?

This is really the opportunity for the international community to identify how the MDGs worked or did not work for women and girls on the ground; what was in the MDGs for women and girls, even in terms of the targets and indicators; and therefore, what lessons do we take from that.

If you take the key messages from this inquiry, one is that it pays to have a separate goal on gender equality and women’s empowerment, because it focuses your attention—you prioritize it. At the same time, the lesson is that what is in that goal is unfinished business. There is good progress, but there is also mixed progress.

Illiteracy is still much higher amongst girls than amongst boys. Secondary and tertiary education is still a challenge for girls. Similarly, there is only 20 percent representation of women in parliaments if you take the global average, and only in 30 countries have they exceeded 33 percent. So, it’s unfinished business, even if you look at the limited number of targets and indicators that you had in MDG 3 and in other goals.

So, what does that mean? It means that we must take MDG 3 forward but in a more structurally transformative way, and we must also address the root causes of inequality and structural barriers to equality and discrimination. And that’s why we are now looking to use this CSW 58 as a platform for really getting a consensus on what that next generation of gender equality, women’s empowerment, and women’s rights goal should be.

What would that look like in your mind? How would you like to see women and girls included in the post-2015 development framework after the MDGs expire?

Well, UN Women has been advocating for a stand-alone gender goal. It is actually a goal on achieving—not just promoting, but achieving—gender equality, women’s rights, and women’s empowerment. This goal has three distinct targets, but of course they are interrelated.

One relates to security, safety, physical integrity, and that of course equals ending violence against women. The second target relates to providing equal access for women to resources and capabilities— particularly access to productive resources and decent jobs—and therefore addressing economic empowerment as well as social empowerment. Sexual and reproductive health is also part of this second target.

The third target relates to voice, participation, and leadership and decision-making at the household level, at the private sector level, and in all public institutions—not just parliaments, as it was in MDG 3.  Across the board we want voice, participation, and leadership of women to achieve parity, if we could, but in any case at least critical mass of 33 percent—this is our dream goal.

At the same time, it’s not enough to have a specific goal on gender. This gender perspective must also be integrated into all other sustainable development goals, such as food security and agriculture, and we are developing gender-sensitive indicators and targets for these.

Which area do you see as being the most difficult to make progress on in the coming year?

I would say the most challenging aspect of our gender equality/women’s empowerment endeavor is dealing with mindset change—bringing about change in the way people look at issues of equality and discrimination. And that is why we are very much emphasizing transformation as at the root of everything. It has to be a transformative goal.

What does that mean? That means you have to address issues like stereotypes—gender stereotypes. You have to address issues relating to how men and boys look at this issue of gender equality. Therefore, on International Women’s Day we launched the He for She campaign. So, men speaking and owning the agenda of gender equality and women’s empowerment—I think that’s critical.

And of course women themselves becoming agents of change, and gaining that confidence that we can do it and that we are going forward. So these are the two most challenging.

There’s a lot of evidence to show that peace and development are most likely to succeed in states that are inclusive and responsive to their people. What role do inclusive governance and women’s participation play in this debate leading up to the post-2015 framework?

As you know, one of the focus areas in the post-2015 development framework talks about peaceful and nonviolent societies. Even in our goal we have talked about the situation of women in conflict and post-conflict countries. Women and their empowerment and equality are fundamental to sustainable peace.

Even though they have not been implemented in the way that they should have been, UN Security Council Resolution 1325 and most recently 2122 provide a basis for setting out an agenda in the post-2015 development framework. This is an agenda for peace and security that would draw upon the special talent, resources, and capabilities of women to prevent conflict and build peace, because that is an untapped resource. There are so many examples of early warning systems and other things which are developed by women, because they have been at the receiving end, so they know how to deal with this.

So after the CSW ends, what will UN Women’s priorities be for 2014?

First of all, CSW is a continuum. We have to implement the outcome. So one is to follow-up and continue through 2014 and 2015 what we have agreed now.

Second is to continue the strong impulse that UN Women has been giving to the engendering of this entire post-2015 development framework and these new-generation sustainable development goals. How do we also work on means of implementation? Building accountability frameworks is going to be one very important task. Goals and targets have no meaning if you don’t hold governments and other stakeholders accountable.

Then lastly, but not least, 2014 and 2015 have been for us a confluence of five historical processes. One is, as you know, the CSW itself, and that involves this whole issue of MDG acceleration and taking it to its logical conclusion. The second is the post-2015 development framework. Then we’ll be marking the Beijing Platform for Action and Beijing Declaration’s 20th year next year—the Beijing+20 campaign gets launched now. Then 2015 is also the D-Day for a global climate agreement, and we have been very much engaged in engendering that. And the fifth thing is 15 years of 1325—we celebrate next year 15 years of UN Security Council Resolution 1325.

It’s going to be a very, very dynamic year for gender equality and women’s empowerment.

So I have to ask, with the confluence of all of these strands and all of the energy that you’re talking about this year and next year…

…how likely do you think it is that you will see gender parity in your lifetime?

Well, I wish I had that long a life to lead, because in most areas, if you continue at the present level, we’re not going to get gender parity in the next 50 years. But we do hope that if our proposals get accepted, then we can accelerate.

And yes, if not in my lifetime, at least in my daughter’s lifetime we can see the changes that we should have seen even in the 20th century, let alone 21st century. But I think by 2030, if we set the goals, if we set the targets, and we make the commitments, it will make a difference.