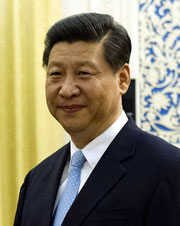 The second session of the new Chinese Parliament begins today, March 5, in Beijing, marking a year since the fifth generation of leaders took power in China. While a year is a short span of time to evaluate its achievements, there are nevertheless some new elements in this leadership’s approach. Here are four of them:

It is widely acknowledged that the Chinese Communist Party (CCP) is not a cohesive monolith, and that China is not ruled by one paramount leader, as it was in the eras of Mao and Deng. The decision-making process is more and more based on reaching consensus and a “collective leadership,” especially noticeable during 2002-2012 under Hu Jintao.

Yet in observing the current administration, there are some doubts that “collective leadership” is still valid. President Xi Jinping seems to be more visible and active than other leaders, especially Prime Minister Li Keiqiang and other Standing Committee members. It seems apparent that he is going to monopolize China’s political scene, highlighting his strength and power of influence. For example, apart from being CCP secretary-general and head of state, he became (contrary to predictions) chief of the Central Military Commission, which commands the People’s Liberation Army (PLA), in the first Central Committee plenum. Other recent examples are found in the two institutions established in the third plenum: the National Security Commission and the Leading Group for Deepening Reforms. Xi was anointed leader of both, despite speculations that the Leading Group would be chaired by Li Keqiang.

This approach might indicate that Xi has solidified his authority and would like to be seen as a paramount leader. On the other hand, it may suggest that the internal tug-of-war is still underway and Xi is now focused on overcoming conservative resistance and exerting pressure on all party members into conducting reforms. Regardless of this internal situation, both cases elevate Xi to a top position.

Before the fifth generation took power, some voiced opinions that China would become more assertive in the region due to Xi Jinping’s close relations with the army and the fact that he is a representative of a princeling caucus inside the party. Moreover, it was rather clear that Xi is not entirely convinced of the value of Deng’s “keep a low profile” strategy and might feel that China’s strong economic and military position in the region predestines the PRC to show off its power.

In fact, there are some signs this is true. In recent months, China’s leaders have given a high profile to security and military issues, and one can observe an ongoing modernization of the military, with an intensification of drills and demonstrations of new equipment. China has also raised concerns about its intentions with its unilateral and unexpected decision to establish the East China Sea Air Defense Identification Zone, which overlaps with zones of Japan, Korea, and Taiwan, and encompasses the Diaoyu islands claimed by China and Japan; also with its new fishing rules in the South China Sea–it is sending regular patrols there—along with an announcement that the PRC is considering launching a new air identification zone there “at an appropriate time.”

Regardless of Beijing’s intentions, the fact that China did not consult with its neighbors and did not even give prior notice about these moves created feelings of apprehension about the PRC’s aims and increased tensions in East Asia.

China’s increasing assertiveness is only one side of the coin. On the other side, there are friendly gestures. What China is doing goes along with its old Confucian philosophy–harmony and the doctrine of the mean. This is translated into balancing any assertive steps that trigger concern in the region with moderate steps using soft-power tools. Under its new leadership, China is apparently perfecting this skill.

For example, China has restored the idea of a “new Silk Road diplomacy” to strengthen its political and economic clout in the region and balance US and Russian relations. By using “Silk Road” in two of its slogans—a Silk Road Economic Belt, which refers to Central Asia, and a Maritime Silk Road, which encompasses its southern neighbors, including ASEAN—China has reinvigorated an excellent tool of mulin zhengce (good neighbor policy). Upgrading relations to strategic partnerships and offering lucrative assistance, including infrastructural projects (the main tools being used under the new Silk Road diplomacy), are aimed at strengthening relations with crucial neighbors indispensable for China’s stability, filling development gaps, securing export markets and the supply of raw materials, preserving stability in the country and peace in the neighborhood, and demonstrating China’s international relevance and paramount position in the region.

Another example is Taiwan. Just after the announcement of Xi’s Chinese Dream slogan—defined as a great rejuvenation of the Chinese nation—many experts thought he might be alluding to reunification with Taiwan. It seems likely that, after a significant improvement in relations with Taipei under China’s fourth generation of leadership (the Hu-Wen administration), the new leaders, who need a success story, would like to go a step further and launch political talks with the island. Obviously, China exerts pressure on Taiwan, but in a very skillful way, using a charm offensive: examples include China’s acceptance of Taiwan’s first free trade-like agreements with New Zealand and Singapore; the PRC’s approval of Taiwan’s participation in the 38th International Civil Aviation Organization Assembly in Montreal; and non-establishment of relations with Gambia, which terminated diplomatic ties with Taipei in late 2013. But the real diplomatic masterpiece is the recent direct, high-level meeting between Chinese and Taiwanese officials in Nanjing, the first since 1949. The fact that China agreed to hold a meeting with a state-level Taiwanese representative might be seen as a skillful way to launch political talks and overcome Taiwan’s reluctance.

Another example of soft power (and public relations moves) is Xi Jinping’s loose and smiling demeanor—it is really a significant change compared to Hu’s “poker face”—and the demeanor of his wife, who is often called a Chinese Michelle Obama. And there are other skillful diplomatic steps such as assisting in destroying Syria’s chemical weapons and sending a Chinese envoy to the South Sudan when violence broke out in December 2013 to help facilitate a resolution.

4. The Biggest Threat For China Is China

But one thing that is absolutely clear is that, for Chinese leaders, the most important issues are domestic. There is a consensus among China’s experts that the biggest threat for China lies in China. Among them are huge income inequalities resulting from an outdated economic structure which is based on expensive exports and compounded by an aging society (a result of the family-planning policy, among other factors). The new leaders started with anticorruption and rectification campaigns aimed at improving CCP’s image and defusing social anger against corruption while winning the people’s support. The long list of party officials who are now on trial could be perceived as an attempt to show Xi’s determination in moving the party close to the masses.

Yet the biggest achievement of new Chinese leaders is the third plenum decisions, which are widely considered significant. Overall, the document indicates a redefinition of relations between the state and the market, and between rural and urban areas. The meeting has cleared the way for a declining role of the state in the economy, for more rights for rural residents, and for a relaxation of the family-planning policy. Although the scope and depth of reforms remain unknown, it seems that they will be implemented first through pilot programs in selected parts of China, emulating Deng’s gradualism approach.

Just before the Chinese New Lunar Year, Prime Minister Li Keqiang said that the Year of the Horse means a speed-up of reforms. This first year of the new Chinese administration shows that China will work to keep its high profile. Despite the fact that economic indicators are not as good as a few years ago, it must be highlighted that they are convergent with the aim written in the 12th Five-Year Plan in November. Three months have passed since the plenum concluded its conclave, and adopted its 60-point document.

Despite the fact that the fulfillment of the announced changes needs time and a consensus inside the CCP, the first signals of its implementation are noticeable. The National Security Commission and Leading Group for Deepening Reforms have been established and begun their work, while the National People’s Congress Standing Committee has decided to abolish re-education-through-labor camps and set a framework for reforms of its family-planning policy. The Zhenjiang province has already introduced a bill that gives people the right to have two children if one of the parents is an only child. Other provinces are preparing for changes this month. The effects of these changes may still be minor (experts predict that the “adjustment” of family-planning policy will not result in a baby boom, taking into account the population has already moved away from the traditional mentality of having many children because of concerns about the future), but the changes themselves are hugely significant.

The fifth generation of leaders is facing serious domestic problems. It seems plausible that they have no choice but to implement the November reforms, because domestic reforms are China’s best chance to elevate its international status and fulfill Xi’s Chinese dream.

Justyna Szczudlik-Tatar is a China Analyst in the International Economic Relations and Global Issues Programme at the Polish Institute of International Affairs (PISM).