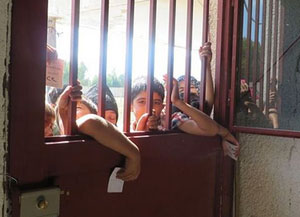 Three years into the Syrian conflict, one million Syrians have officially sought refuge in neighboring Lebanon, a country of 4.2 million people. Lebanon’s hospitality is steadily being stretched to the limit. Syrian refugees have self-settled all over Lebanon, but mainly in the north and the Bekaa valley. The Lebanese authorities have so far refused to let the United Nations set up separate camps to house the refugees. They fear that the refugee camps could turn into permanent settlements and increase the likelihood that the Syrians may decide to stay.

The absence of refugee camps means that Syrian families are settling in local communities ill prepared to accommodate the mass influx. After the presence of Syrians in Lebanon has reached one quarter of Lebanon’s population, the pressure on limited resources is felt in every community. How can Lebanon cope with this challenge? Are refugee camps the solution?

More than two thirds (70%) of Lebanese expressed a wish that the UN establish refugee camps for Syrian refugees in Lebanon. The finding derives from a 2013 study of a representative sample of 900 Lebanese respondents by the Fafo Foundation, an independent research organization. A case study I conducted in the northern Lebanese village of Bebnine, part of the same Fafo study, indicates that finding shelter is increasingly challenging for refugees. In the beginning, people believed the crisis would be short-lived, and local residents showed generous hospitality towards the refugees. When the first refugees arrived in Bebnine, apartments were available, and some refugees were even provided for by a benefactor who paid the rent. Later, refugees had to accommodate themselves by staying with relatives and friends or rent available shelters. As a result, the monthly rent for an apartment in Bebnine increased from around $200 in 2011 to $450 in 2013.

Refugees we met expressed anguish about their inability to pay the rent after their savings had been exhausted. Those who cannot afford the open rental market live in makeshift shelters designed for other uses than accommodations, usually without adequate water, electricity, and sanitation. Refugees in Bebnine have turned shops, garages, store rooms, hallways, and even a slaughterhouse into makeshift shelters. The latest arrivals to the village were often only offered improvised tents constructed with wooden poles wrapped in plastic. These shelters had only rudimentary water and sanitation facilities and are not weather-proof. A local charity organization in Bebnine was in the process of renting some land to accommodate 100 more plastic shelters for refugees. Clusters of such informal living arrangements have popped up several places in Bebnine, and more than 400 informal tent camps are registered around Lebanon to accommodate Syrian refugees.

The Lebanese popular call for refugee camps can be interpreted in the context of the strain that the Syrian refugees put on the country’s meager resources and services in local communities. A young municipality worker in Bebnine said they had no resources or authorization to work directly with the thousands of refugees in the village, saying, “I think a way to solve this problem is to make refugee camps for the Syrians like they did in Jordan and Turkey… put them all in camps and give them all their needs and explain to them that they are not allowed to take all the job opportunities, since the Lebanese need to work as well.”

The growing competition over labor is building up resentment towards Syrians among the Lebanese populations. Although refugees get aid provisions for food, they need to secure funds for rent and thus compete with locals in the labor market. The locals lose in this competition because they do not have equal access to aid, which helps Syrians accept lower wages. A leader in the village said, “After the Syrians came to the village, there is more pressure than we can handle. We do not have enough houses for them to live in… There are no positive benefits from these Syrian refugees; it is all negative. There is no more work for our children, because if a Lebanese takes $17 [for a day of work], a Syrian takes $7, and they will employ the Syrian.” The request to contain and restrict Syrian refugee activity is further associated with people’s concern over Lebanon’s deteriorating security situation and the risk for intensified sectarian violence and an outright civil war.

Both Lebanese policymakers and the UNHCR support a non-camp strategy, claiming it is better for the refugees to be integrated in local communities. The reluctance to establish formal camps for Syrian refugees was said by our informants to be related to the experience of Palestinian refugees who have been in Lebanon for more than 60 years. Their history promotes fear that the Syrian refugees will generate multiple problems for Lebanon. After three years, few expect the crisis to be solved shortly or for the refugees to return to Syria any time soon.

A closer look among the population polled in the north, one of the areas most affected by Syrian refugees, shows that 80 percent believe that the UN should establish camps for Syrians. The magnitude of a crisis poised to grow out of control is also convincing several political leaders to reconsider their policy. Discussions to allocate land for refugee camps have started, and a well-connected informant in Tripoli explained, “At the end of March [2013], the government started to think about creating refugee camps, but these camps cannot have more than 5,000 people in the north and 5,000 people in Bekaa. This will be more like [a place] where you register the refugees and give them the first assistance. But then the cabinet resigned, and now we do not have a cabinet so we cannot take any decisions.” A new cabinet was only formed in February 2014. Their main focus will be on the fragile security situation and complicated economic and social concerns. The Syrian refugees are at the core of all these issues, but camps for the refugees are not yet on the agenda.

People’s opinions about camps for Syrian refugees are no doubt formed by job competition, security considerations as well as the Palestinian experience. However, despite the popular call for camps, the notion of refugee camps is still contested. An NGO worker claimed the issue of camps was complicated, acknowledging the pressure refugees had on local communities, but camps could both be an issue for Lebanon’s security at large as well as fail to give the refugees their needed protection. Several informants pointed to infighting between Syrian refugees both in Turkey and in Jordan which has been avoided in Lebanon.

What is the alternative, then, in accommodating the refugees in Lebanon?

Lebanon has already chosen a decentralized approach to the refugee challenge, and the UNHCR has to some degree adapted to this by setting up regional offices to assist the refugees. However, in a village like Bebnine, it often took an hour for refugees to get to the nearest UNHCR office in Tripoli to register. The distribution center for aid was located in yet another place; an hour travel in the opposite direction. The village leaders, on the other hand, had no authority at all towards the Syrian refugees. The municipality had taken on the task to register the refugees arriving in the village, but had no funds and no authorization to act beyond registration. The mayor said, “The refugees have impacted our village in a very negative way; they are poor and not well off. And I cannot help them as a municipality. We do not have money, so it is not our job. It is the job of the government, but they are doing nothing. The only ones doing anything are the [local] NGOs.”  Local NGOs were active in distributing first aid to refugees while they were waiting for registration and aid from the UNHCR.

Closer cooperation between UNHCR and the local representatives could not only empower local leaders in a fragile situation, but also facilitate UNHCR work and access to aid for the scattered refugees. Registered refugees are receiving aid once a month; this could be coordinated with local authorities on a rotation basis by UNHCR representatives coming to the village instead of each refugee traveling to the distribution center. Local authorities are already making efforts registering refugees and, due to their proximity, have knowledge about the refugees in their community. Through this cooperation, local leaders would not be reduced to passive onlookers to the mounting challenges growing in front of them, but could actively take part in operations needed to handle the situation in their community. Already several local NGOs are operating with direct funding from Gulf countries, but there is little coordination between them. Giving the municipality a leadership role towards the refugees could also empower them to improve coordination between the local organizations.

Further, since the main challenge between refugees and locals is competition for work, and as long as there is a policy to settle refugees in local communities, this competition will continue. A larger involvement on a municipality level could address this problem by introducing labor-intensive projects to create jobs for both locals and refugees. This method was introduced in the Palestinian territories after the second intifada and the implementation of the Israeli closure policies. At first, the UN and the World Food Program wanted to distribute food aid to isolated villagers, but a Fafo study found that lack of food was not a problem in these villages, but access to work was. The mayor in Bebnine mentioned many areas in the village that needed development, the most urgent being upgrading of the sewage system. Redirecting aid to such labor-intensive projects will provide work for locals and refugees, reducing tensions and competition for work. The project will also benefit the local community at large by upgrading infrastructure and other development needs, giving the local community a visible reward for their efforts and hospitality towards the Syrian refugees.

Mona Christophersen is a researcher at Fafo and a senior advisor at the International Peace Institute.