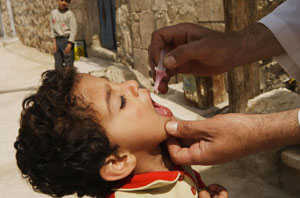 Dr. Annie Sparrow is a pediatrician and public health expert who has worked in numerous conflict zones over the last 15 years. She first heard about a new polio outbreak in Syria when she was traveling along the border between Turkey and Syria in September last year. In a recent article in The New York Review of Books, Dr. Sparrow shone a spotlight on this lesser known dimension of the Syrian conflict and suggested that the situation may be worse than we think.

I spoke with Dr. Sparrow, Assistant Professor of Global Health and Deputy Director of the Human Rights Program at Icahn School of Medicine at Mount Sinai, New York City, by telephone on January 30 while she was in Turkey, training Syrian doctors. What follows is a condensed and edited version of our conversation.

In your recent article, you suggest that there have been more than 90 cases of polio in Syria, which could mean some 90,000 infected people invisibly spreading the disease. What’s going on?

The Syrian government has created the perfect conditions for polio and various other infectious diseases for years now through the withholding of vaccinations and the neglect of public health in areas considered politically unsympathetic. So, in terms of the polio outbreak, the Syrian government had no interest in acknowledging it. It didn’t make any serious attempt to look for it, despite the establishment of its own surveillance system. For months and months, it basically denied that there was any polio at all.

There’s a very frightening uncertainty about the figures. All of the international aid that flows through the UN system is forced to be orchestrated by the Syrian government, because those are the international rules of assistance under the current mandate. The UN is allowed to help, but only with the government’s permission, and the government decides where the aid goes and what the official position is, and unfortunately, the UN has to abide by that.

At the same time, for many of us working on this conflict, we could see that polio was coming. But when it did appear, it not only wasn’t being reported, it was being actively denied.

How is polio spreading in Syria today?

Polio has now been identified in seven governorates across Syria. It’s not like measles, where everyone gets a horrible rash and they’re violently ill, so we know that they’re infectious and it’s easy to spot. With polio, only a couple of percent of the kids who actually get the infection manifest any kind of symptoms. So it’s really hard to recognize.

Only a tiny percentage of the children who are infected become paralyzed. And that’s why each case represents up to a thousand other children, particularly in the conditions under which Syrian children live—in these highly overcrowded conditions where three or four families are living under one roof with very poor public health, very poor hygiene and sanitation, and unsafe water.

You have called the polio outbreak in Syria a “man-made outbreak” and a “war crime.” Tell me how you arrived at those conclusions.

It is not an accident that all the cases of polio have been identified in opposition-controlled areas, or areas outside of government control. It also wasn’t an accident that polio came back in the same place where there was a cholera outbreak in 2009: Deir al-Zour.

It has appeared in governorates where the government has stopped supplying vaccinations or where the clinics that used to supply the vaccinations have now been destroyed by airstrikes or shut down because of insecurity. It’s far too dangerous to travel to work because doctors, nurses, and pharmacists are actively detained, tortured, and arrested for doing their jobs. Or, there’s no power plant to supply the refrigerator to keep the vaccines viable because the power plants have also been destroyed. So even if the health facility exists, it’s not operational anyway.

The rules of war were created in the first place to provide treatment, relief, and aid to the civilian population even in the midst of war. But here we have these sustained, deliberate, ongoing attacks on the healthcare system, on doctors, pharmacists, paramedics, relief workers—including national and international relief workers—on a scale that’s unprecedented.

And that’s a war crime. It’s a man-made outbreak for all of those reasons. We wouldn’t be seeing it if it wasn’t a manifestation of the violation of all of these rules of war.

How does this compare to what you saw when you were in Afghanistan and Somalia?

In terms of polio, this is much worse. I have never seen such a violation of medical neutrality on this scale, which is absolutely unprecedented, where there are so many attacks on doctors, on relief workers and on the healthcare system. It was never anywhere near this bad in Bosnia, Cambodia, Somalia, or Afghanistan. Humanitarian space is not just closed, but criminalized.

You’ve been training Syrian doctors over the last two days in Turkey. What do they need?

They need support, and they need safe passages of humanitarian aid. I can give them my expertise, I can teach them how to look after polio. But in the end, whether it’s blood that they need or vaccinations or the medical supplies to address not only the war trauma, but the asthma, diabetes, kidney failure, chronic lung disease, heart disease—they need a safe passage for humanitarian relief.

I found a case that was not known to either the [opposition-led] ACU or the government. In this instance it was a fourteen-month old girl living in a village just a few miles from the Iraqi border who had been infected with polio in November, and she presented with symptoms of cough, cold, and fever. A week later she presented to my colleague—a very senior pediatrician who is familiar with polio from many years ago when it was still present in Syria—and she manifested with the flaccid paralysis, where you have weakness in all four limbs.

She’s gone from being an active toddler, who was able to walk holding her daddy’s hand—she was cruising and crawling and otherwise completely developmentally normal—to being crippled. Her twin was sent away to her grandmother because of the fear and the stigma that polio induces.

What could the international community be doing to tackle polio more effectively while the conflict goes on?

This is a radical threat. We need the UN Security Council to mandate a cross-border mandate which enables access across Turkey, across Lebanon, across Jordan, in order to be able to reach these children—not only to vaccinate them, but to bring clean water, food (vaccination is less effective in starving children), and access to treatment so affected children don’t become permanently paralyzed. We need the all members of the UN Security Council, particularly Russia, who has a great deal of influence, to be aware of this radical threat, and to take a responsible position in responding to this global threat. And those organizations working in Syria need a lot more assistance–such as the ACU, the Syrian American Medical Society, Islamic Relief, to name a few.

Marie O’Reilly is Associate Editor at the International Peace Institute. She tweets at Marie_O_R

About the photo: A boy receives a dose of oral polio vaccine in Syria. Photo credit: UNICEF