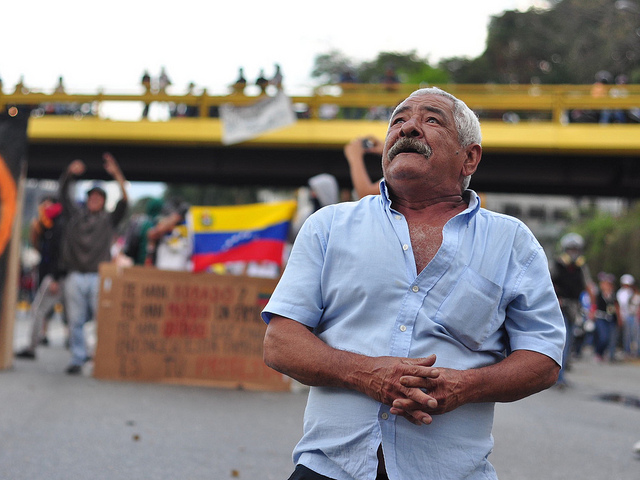 Venezuela is witnessing a massive wave of antigovernment demonstrations which began as peaceful protests in early February but have now left at least twelve people dead.

Margarita López Maya, a professor at the Central University of Venezuela, spoke to me from Caracas on February 26.

A: The protests began with a student movement. But the student movement moved since the beginning of February behind the demand for security. It began in one of the cities in the interior of the country with a student that was going to suffer a violation at the university. And then the protests began there and spread to the rest of the other cities.

But as they started developing the protests, all the hardships of the rest of the population, because of the inflation, because of the different scarcities of food, because of the devaluations—we have had two this year—all these things brought a whole field of complaints and made civil society and political parties of the opposition go to take to the streets led by the student movement.

So, it is very broad. They have been massive, the protests, especially the protest on February 12 in Caracas—and that was not televised, by the way. So they have been showing the videos and photos through the Internet, and trying to go out through the international media, because in Venezuela it [the media] is very much controlled by the government.

These hardships have been combined, of course, with the death of the president, Hugo Chávez Frias, who was a very charismatic leader. And in that vacuum, in a way, all these things came to the surface and have produced a very difficult situation for the people. People are beginning to realize all the different crises in their daily life. And the government has responded to this with repression and militarization.

Leopoldo López was one of the main political figures supporting and leading the protests. He is now in jail awaiting trial for inciting violence. Was his arrest a tipping point for the protest movement?

So, it’s not really precise to say that they were the leaders of this. They accompanied this and, in a way, they agreed to go to the streets because, in Venezuela today, democracy is a very thin. The government controls the public powers; it controls practically the supreme justice tribune, the national assembly, the national electoral console—they are all subordinate to the executive.

But who takes the lead in this protest is the student movement. So, in a way, Leopoldo López, goes to jail because they put him as responsible for what is going on, but I think the government is more taking advantage that he was in the streets to get him away from politics because he is a leader that has a lot of charisma, and he has a political party that is growing.

Last year, the candidate of the opposition was Henrique Capriles Radonski. And they also tried to put him in jail, but the difference was with Capriles Rodonski—finally they didn’t put him in jail. But Leopoldo López… he himself went and said, “Okay take me.” So, I think there is kind of a political resource there, because the government plays a lot: “I’m putting you in jail. I’m putting you in jail.” But then it doesn’t do it.

So is Capriles someone who might now take on a leadership role? And could he even enter into dialogue with President Maduro?

Well, Capriles has been the leader of the opposition because he was a candidate twice, with Chávez and with Maduro. And in both campaigns, in the results of the campaign, he grew. And he almost won the presidency in April 14 of last year. So, he really has been the main figure of all these forces. But you must remember that this is an alliance of forces that are more than 20 parties. And he continues to be, in a way, one of the leaders there, and the most important leader that they have.

This opposition alliance that is called the Democratic Unity Roundtable—most of them would have not agreed with what Leopoldo López did during the protests: to go to the streets and try to radicalize that protest. They didn’t agree with that, but since they are independent parties, he decided to do that with María Corina Machado, and in a way, he obliged the rest of the parties to support him. So, one could say that he wasn’t the main leader of the opposition—and now, in jail, he probably will not be either.

What about on the government side—how unified is the Maduro administration behind him? And how much popular support does he still have?

But one could have the hypothesis because of the way he is behaving—President Maduro is behaving—that there is a lot of conflict at this moment.

Two days ago, one of the governors, for example, in one of the most difficult states of the country that has been under severe stress because of the protests—the national executive has done a lot of repression there with the security corps. And two days ago, the governor went out to speak and to say that—he is a general; he is also a military man, and he is from the party of the government—and said he did not agree with the repression that the national government was doing in his state.

This is the first time somebody at that level talked out, criticizing the repression that has been going on during these protests. This shows you that probably he is not coming out alone. He is maybe the first voice of that. So I think there’s a lot of conflict.

We can see also that Maduro is very incoherent and talks in a very contradictory way. One day he talks about love, and the other day he talks about this fascist, rightist plotting, “I’m going to put you jail. If I have to be a dictator, I’ll be a dictator.” The next thing you know, he’s talking to you about love and dialogue. So, this shows, I think, in a way that they can’t put their act together because probably they’re having a lot of problems inside around the question of what to do with this massive protest that has now more than 15 days.

What do you see as the way forward?

Very uncertain. The situation is very, very uncertain in Venezuela. I think the phenomenon of the protests that has been developing since the beginning of February, I think it’s the first time it has taken so long to control it. I think that is due on the one part because of the repression that has been very severe—the militarization, the criminalization of the protests—and this idea of President Maduro’s of associating it with some kind of international plot, which is very absurd.

So, if he continues in that policy, in that orientation of his government, probably this is going to continue to be very unstable. And we don’t know, really, because institutionally there is, at the moment, no way out of this situation.

Is there a possibility for dialogue?

Of course, we have some signals. About four or five days ago, they had to dismiss some of the chiefs of the security corps because details in the photos show that members of the political police used their arms during a peaceful manifestation. And that is illegal in Venezuela. President Maduro does not recognize that, of the ten or twelve death toll that we have, for about seven or eight, the police or the National Guard were responsible. But at the same time that he does not talk about that, he is dismissing the chiefs of the cause of these excesses. So there are some very weak signals that there may be some kind of recognition of this. But I don’t think it is enough.

Margarita, thank you for speaking with me today.

Marie O’Reilly is Associate Editor at the International Peace Institute. She tweets at Marie_O_R