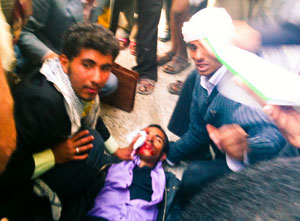 After the momentous events of 2011, Yemen sadly has become a kind of backwater of the Arab Spring in the international media. What rare news headlines surface usually include the word “drone,” “al-Qaeda,” or “terrorism.” Beyond the headlines, Yemen is characterized by the same ambiguity as many fragile environments: a unique process of national dialogue concluded on an upbeat note while violence intensifies. In Yemen’s case, the violence is intensifying around Dammaj in northern Yemen, with the southern protest movement apparently radicalizing, and the normally peaceful Hadramaut governorate seeing a tribal war erupt.

Yet beyond both headlines and recent events, one finds the deep structural factors that have shaped the Yemeni polity over the past decades. The difficulty ordinary Yemenis face in obtaining justice through peaceful and legal means is one such factor that contributes significantly to creating the raw matter of current violence.

By 1994, Yemen’s hopeful unification had turned into a hostile take-over of south Yemen by largely northern elites and their allies. Buoyed by an oil boom and remittance bust, they were able to use the country’s tribal tapestry to divide, rule, and selectively centralize the state, chiefly in the areas of security and commerce.

One of the less noted aspects of the ensuing two decades of rule is how the gradual capture and partial marginalization of Yemen’s legal systems by these elites have generated deep grievances and left violence as the only way open for many to settle their disputes. A “justice at gunpoint” environment is fast in the making. A notable example is the cold-blooded shooting in broad daylight of two Adeni men in May 2013 by the bodyguards of Sheikh Ali Abd Rabo Al-Awadhi for disrupting his wedding convoy. Although legal proceedings were started, the case has not progressed to date. The likelihood of justice being done is remote.

More specifically, the state judiciary incrementally became an extension of the ruling elite on a nation-wide scale after 1990. This was achieved through three interlinked processes. First, the executive took control of the Supreme Judicial Council, which is charged with administration of the judiciary. As a result, judicial independence became largely fictional. Second, the judiciary was largely staffed on the basis of loyalty instead of merit. Third, legal training, civic education, and legal infrastructure were vastly underfunded—purposefully—in relation to what popular demand for justice required. As a result, cases that concern influential individuals are either not prosecuted or judgments are not implemented (ca. 60%), the grand corruption that is practiced by major power brokers is replicated at micro-scale throughout the state judiciary, and in many places state-based justice is simply absent.

Against this backdrop, it is fortunate, in a way, that Yemenis do not bring most of their disputes to the state-based judicial system. Tribal customary law is the main mechanism for the peaceful legal resolution of disputes, which has been the case for centuries. About 70-80% of all disputes that are resolved legally are estimated to be handled by this system. However, tribal law is suffering from a gradual erosion of its legitimacy and reach. Cooptation of tribal leaders by the ruling elite-cum-government; growing business interests of sheikhs that create conflicts of interests; and the struggle of tribal law to resolve collective action problems as well as accommodate modern human rights principles cause it to vary significantly in relevance across Yemen. This is a dangerous development in a society in which the rich tradition of tribal customary law has traditionally exercised significant restraint on impunity and dispute escalation.

This deterioration of Yemen’s state of justice has brought about a significant decline in social justice. To a large extent, Yemen’s current conflicts can be seen as manifestations of the deep dissatisfaction with this development. Simply put, southern Yemenis feel marginalized, disadvantaged, and exploited. Land grabs and unfair dismissals are key grievances. Yemenis in the northern Sadaa governorate and beyond experience a threat to their identity and livelihood. Elite-fuelled local competition under religious guise that extends into community and legal spheres is a key grievance. Yemenis in the south and east suffer a rising level of al-Qaeda activity as well as US (drone) strikes. What these conflicts have in common is that two decades of political marginalization, economic deprivation, and limited possibilities for legal redress of legitimate grievances have created a strong sense of social injustice. Violence is the only way open to many to voice their resentment. In such a context, violence begets more violence. It also provides fertile ground for political entrepreneurs to activate new social boundaries, often sectarian in nature.

While these conflicts are fraying the edges of Yemen’s social contract, its poor state of justice is unraveling its core. This happens at the same time as Yemen’s National Dialogue process has set out a new and positive vision for the country’s future. It is obvious that more harmony between these countervailing forces needs to be created. Among other things, this requires avoiding tempting narratives (and associated responses) about Yemen as the next launch pad for a global jihad or as another Shia-Sunni battlefield and getting down to the business of improving the daily lives of ordinary Yemenis, including the kind of justice they can obtain. It will be a decidedly political undertaking.

Erwin van Veen (@ErwinVeen) is a senior research fellow at Clingendael’s Conflict Research Unit. This piece is part of the project “From the struggle for citizenship to the fragmentation of justice: Yemen from 1990 to 2013.” You can read the main report here.

About the photo: Two men aid a third during violence in Sana’a, Yemen, February 2011. (Sallam/Flickr)