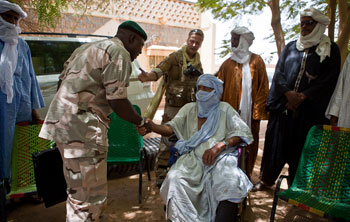 A delegation of the Joint Security Commission‚ in charge of observing the ceasefire between the Malian army and armed groups from the north, on an assessment mission in Kidal, June 23, 2013. (MINUSMA/Blagoje Grujic)

It’s been one year since the French Army intervened in Mali. While progress has been made in addressing several important issues, much more needs to be done to build social cohesion and ensure long-term stability for the country.

The particular challenge in Mali is whether the peace process, aimed at negotiating with and constraining armed groups, can be configured in conjunction with the reconciliation process, aimed at re-establishing relationships between different communities. At this stage, Mali needs to draw a careful balance between state security and human security. The international community will also need to perceive and navigate its role from this angle.

The Mali crisis is a multi-dimensional mix. It has a south-versus-north component, ethnic tensions, ambitions of violent extremists, criminal interests, and a struggle over how the nation will be governed. Most of these components play out beyond Mali in a regional context as well.

Following the French intervention in January 2013, the international community responded relatively swiftly and in a unified way to the crisis. In April, the UN Security Council agreed on the “re-hatting” of efforts by regional organizations into a UN stabilization mission (MINUSMA), supported by a continued capacity of the French who are mandated to use all means necessary to intervene in support of MINUSMA.

Domestically, Mali state power has been reset after successful presidential and parliamentary elections between July and December 2013. A new government is in place, led by President Ibrahim Boubacar Keita (IBK). A Ministry for Reconciliation and Development of the North has been created, as well as a Truth, Justice and Reconciliation Commission. The new government has made some promising steps to address impunity and corruption.

To a large extent, Mali’s problems boil down to what will happen in the north. The French have quite consciously left some of the Tuareg-based groups a level of power in order to divide and rule among the different armed groups that were in the process of coalescing early 2012. This allowed them to focus quite effectively on chasing violent extremists. However, the north is not yet secure.

The inclination of the new government is to follow the prerogative of state security, assert what it sees as its legitimate power, and guarantee the effective control of Bamako all over the country. But in the last three months of 2013, government delegations visiting the north have been met by demonstrations that have sometimes turned violent. This in turn has led to irritations with MINUSMA for not being able to fully protect government representatives.

As for the reconciliation process, the government has managed to conduct some preliminary work and regional pre-meetings. But the negotiations aimed at disarming various armed groups have stalled. Most armed groups threatening Mali’s security operate across the region. The majority of the threats to Mali state security can thus be better dealt within a regional framework. However, the credibility of the regional approach under the auspices of Economic Community of West African States (ECOWAS) has been weakened by the crisis because ECOWAS did not have the capacity to meet its political commitments to help safeguard Mali’s security in early 2013, which led to the French intervention.

In this setting, MINUSMA has to manoeuvre carefully. Different from other UN missions, MINUSMA’s function is not to support the roll-out of an already concluded peace agreement. MINUSMA is in Mali precisely to establish a safe environment in which peace and reconciliation can be achieved. Unfortunately, the mission is suffering from a lack of support by UN members and is not likely to reach the total of 12,600 troops as agreed by the UN Security Council.

At less-than-optimal strength, it will not be easy for MINUSMA to provide the necessary security and sustain a credible sense of impartiality. Too aggressively supporting the government in overtaking the north may fly in the face of both peace and reconciliation efforts, while pressuring the Mali government to negotiate with the Tuaregs will alienate the government, and equally step into a space wherein local actors need to have the initiative and take ownership of working towards a solution of the conflict.

With the Mali government and the Mali security forces getting impatient to establish their authority in the north, the question is whether the agendas of peace and reconciliations can be developed along parallel tracks that will talk to each other and converge in a comprehensive approach that will encompass not only on a political settlement but also build social cohesion and human security. In this regard, both the Mali government and MINUSMA will need all the support they can get from civil society to help building the necessary local ownership and engagement for a lasting solution to the multi-dimensional crisis in Mali.