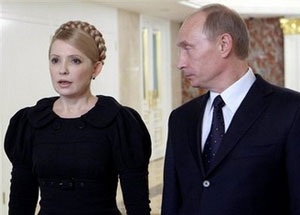 Russian President Vladimr Putin and former Ukranian Prime Minister Yulia Tymoshenko in 2008. Tymoshenko was imprisoned in 2011; today, the Ukrainian Parliament voted in favor of allowing her release, a sign of the waning influence of Ukraine’s current president. (Jedimentat44/Flickr)

The last several days have been among the blackest in contemporary Ukrainian history. Battles between protesters and Ukrainian police units have resulted in nearly 100 dead and hundreds seriously injured. Moreover, there are rumors that some Ukrainian militia (a form of police), security services, and even the army (especially in the Western part of the country) have converted to the protesters’ side.

All of this, in the very worst scenario, may lead to civil war, which would seriously threaten Russian interests in Ukraine. Ukraine is especially important to Russia for geopolitical and economic reasons, in addition to the deep cultural and historical ties between the countries, which is why Russia is extremely interested to keep Ukraine in its sphere of influence. But all those strong ties mean that a persistent unstable situation in Ukraine may have serious negative consequences, even for Russia.

This unrest is especially threatening in a few key spheres. First and foremost, Ukraine is a transit state for Russian gas—in 2013, 53% of the gas sold to Europe was transported through Ukraine. The states also cooperate on defence and in their aerospace industries. From a military standpoint, Russia is concerned with its ability to maintain the Black Sea Fleet in Sevastopol—the second largest port in Ukraine—as its other base in the Black Sea region is in Novorossiysk, Russia, which, although adequately developed, has weather conditions that are much worse.

As long as the Ukrainian government can continue to secure those interests, the Russian authorities will continue to financially and politically support President Yanukovych and the Party of Regions government. However, this does not mean absolute support for the Ukrainian president, especially if, in an extreme case, the protests lead to a civil war and the division of the country, which could destabilize the entire region. The territorial disintegration of Ukraine would mean the first significant change of a country’s borders since the collapse of the Soviet Union. Even more serious would be that, since the Soviet Union broke up along the designated borders of its republics, there is the potential for further disintegration of other countries in the region. Moreover, if Ukraine splits, this could strengthen separatist movements and encourage breakaway movements inside Russia, and the potential of this happening across the region would be a source of instability and dangerous for Ukraine’s neighbors such as Moldova.

There are also other problems that would arise, namely those associated with what would happen to Ukraine’s responsibilities and international rights and obligations (for example, which part should pay off its debts). For Russia, having two new states at least in the neighborhood would mean having to sign a number of new international agreements, including around the Black Sea Fleet stationing.

Nevertheless, if a civil war starts, Russia probably would offer support (including militarily) to the pro-Russian regions of Ukraine, especially Crimea. Such an intervention would be justified by the need to protect Russians living in Ukraine—in 2008, Russian leader Vladimir Putin stated there were 17 million people there. However, in order to do so, Russia would first try to get a UN Security Council mandate and would definitely engage in international discussions about the future of Ukraine in such a format.

Of course, this scenario should be considered an extreme case, especially since Russia may have problems incurring the costs of such an intervention, mainly due to the scale and duration of such an operation, and because it carries the risk of serious conflict with Western countries if the UN Security Council were to reject the action. Moreover, Russia is not prepared for an influx of refugees from eastern Ukraine and Crimea should a civil war or intervention occur.

When all of these factors and possibilities are summed up, a stable Ukraine with authorities that support Russian interests remains a firm priority for Russia. Any other situation would be hard for this regional power to swallow.

Anna Maria Dyner is an analyst with the Polish Institute of International Affairs, Warsaw, Poland.