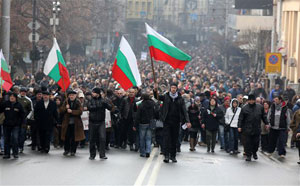 Since 1989, popular demands and large-scale protests in Eastern Europe helped to successfully topple communist regimes, usually with support from long-standing anti-communist civil society stakeholders. Every Eastern European country has since made significant advances in creating and strengthening its democratic institutions. Many, such as Poland, Lithuania, and (most recently) Croatia, became members of the European Union and NATO. Those still struggling—Albania, Serbia, Macedonia, and Moldova, for example—still see membership in the EU as the pinnacle of their democratic projects.

But upheavals over the past year are challenging many pre-existing notions about protest, democratization, the robustness of civil society, and paths to post-communist transition. Unlike the revolutions of 1989, which focused on such unassailable issues as democracy, human rights, and civic freedoms, the current wave of Eastern European discontent addresses the crippling and omnipresent effects of state-level and public sector corruption. In recent months, wide swaths of these societies have taken to the streets to demand varying degrees of government change, ranging from simple course corrections to full-scale revolution.

However, demands for democracy in 1989 were more easily articulated, while achieving less corrupt governance is much more difficult to target. Examples of this can be seen in Bosnia and Bulgaria, two Southeastern European states whose ruling governments have been destabilized recently by popular discontent and even low-level violence. Both societies have been rocked by public demands for less corruption, greater governmental accountability, and increased economic equalities, whose primary drivers are urban-based youth and the educated middle-class—those largely excluded from the political process. Deprived of deeper civil society structures through which frustration could be channeled, these individuals have virtually no other option but to take their grievances to the public square. The pressing question now is whether a durable and independent body of anti-corruption civil society stakeholders will emerge.

Bulgaria’s transition from communism to the poorest member of the European Union has been plagued by corruption at virtually every level of the state. Ineffective oligarchical political rule and the lack of a robust and independent civil society have prevented any post-1989 coalition government, socialist or conservative, from remedying the problem.

The issue came to a head in the summer of 2013 when massive waves of public protests throughout the country rocked Bulgaria’s political elite to its core. A rapid rise in energy costs and living expenses had prompted a series of demonstrations in February 2013, which then morphed into a broader show of anger about governmental ineptitude, income inequality, rising rates of poverty, and economic stagnation. Several self-immolations took place, oddly mirroring the beginning of the Tunisian revolution in December 2010. This perfect storm forced the center-right ruling party of Bojko Borisov to resign and ushered in a socialist government led by Plamen Oresharski.

The new government, formed by a coalition of socialist, extreme nationalist, and the Turkish minority party, came to power as a result of a complicated political compromise. It immediately exposed itself as highly corrupt, ineffectual, and anti-European with the appointment of media and mafia mogul Delyan Peevski as the head of the Bulgarian National State Security Agency. This decision led to another round of massive civil discontent.

The widespread but largely peaceful civil crisis entered into a phase of more robust organization by June 2013 and, as of writing, continues to grow, uniting the young, educated middle class, and elites who are outraged by the misdeeds of successive regimes and the country’s increasingly strong ties with Moscow. As a demonstration of the electorate’s lack of confidence in its decision-makers, Bulgaria is the only Eastern European country never to have elected a government to a second term.

Throughout 2013, Bosnia experienced a variety of smaller-scale demonstrations  directed against governmental shortcomings in addressing issues ranging from veteran affairs to the issuance of state identity cards. The division of Bosnia’s administrative powers into two entities, the Bosniak-Croat Federation and the Republic Srpska, following the 1995 Dayton Accords created a political stalemate and perpetuated ethno-political divisions. This in turn has enabled those in power to distribute foreign aid in the form of EU development loans among themselves instead of to their citizens, who are struggling to move forward.

Demonstrations were triggered in 2013 when mothers made a human chain in front of the main government building in Sarajevo, begging for identity cards for their babies after the lawmakers failed to agree on a new system of ID numbers for citizens. Newborn babies were not only being deprived of documents necessary for passport applications, but also social security benefits or health care. In February 2014, the escalating tensions boiled over, and violent protests erupted in Tuzla, where workers took to the streets to oppose the closure of state companies going through a questionable privatization, largely believed to have been the result of back room deals.

After Tuzla ignited in protest over corruption in the local labor market, and with crippling unemployment hovering at nearly 40%, civic unrest quickly spread to larger urban centers such as Mostar, Sarajevo, and Banja Luka, where disaffected youth collectively called for the resignation of the Sarajevo government, new elections, and steps to end the rampant state of corruption. Government offices were ransacked and set on fire in an act of desperation. The Serbian publication Balkanist defined the Bosnian protests as a “collective nervous breakdown,” and analysts are already talking about a Bosnian Spring. Last summer, Bosnians raised slogans toward their government saying, “You Are All Disgusting, No Matter What Ethnicity You Belong To.”

In a surprise move on February 7, hundreds mobilized in Banja Luka, the capital of the smaller Republika Srpska, in a show of solidarity with the protesters in the Bosniak-Croat Federation. Protesters claimed that politicians are afraid of civil cohesion and ethnic unity, which will make the civil movement stronger and give more power to the people.

Corruption, not Democracy, as a Social Unifier

Unlike the 1989 revolutions that ended communism in the Soviet Eastern bloc, the recent emergence of Bulgarian and Bosnian protests rarely articulate demands for greater democracy. Instead, they lodge public complaints about poverty, social injustice, and oligarchical rule—all fueled by the governments’ failure to deal with systemic levels of corruption. In Bulgaria, people demanded the resignation of the current government and constitutional changes, such as new electoral laws, labeling the civil protest movement “Citizens against the Mafia.” Similarly, Bosnian citizens have demanded the resignation of the Sarajevo government, new electoral laws, and the formation of a new, politically independent technocratic government.

The unlikely similarity of these two cases is the result of a combination of variables that reached their saturation point at virtually the same time. Firstly, a democratically oriented, active civil society has not been a primary characteristic of the political landscape in post-communist Bulgaria or post-Dayton Bosnia. Bosnia still suffers from the dysfunctions of a highly decentralized state and ethnically based political parties. While Bosnian Serbs have long considered post-Dayton Bosnia to be an impermanent construct, Bosnian Croats have recently made vocal demands for greater recognition and distinction within state functions. Bulgarian state dysfunction does not stem as much from ethnic divisions, since its Turkish minority has largely been integrated into Bulgarian state institutions.

However, a shared commonality between the cases is a combination of weak state institutions and an equally weak civil society sector, both of which have failed to curb widespread corruption. To be sure, some attempts over the years to advocate for more transparent governmental procedures and greater equity in the justice system have been undertaken with some support from citizens’ groups and other stakeholders. However, the profound levels of connectivity in corruption in the public and private sectors have prevented durable change. This has served to reinforce a general social malaise that nothing can be done, a sentiment very often expressed in Sofia and Sarajevo.

Media sources and interviews have revealed that, while some symbolic, superficial form of democracy has been achieved, corruption remains the largest barrier to achieving success in the private sector, labor markets, education, and health care, and in attaining highly sought-after state jobs. In both the Bosnian and Bulgarian protests, corruption has unified urban, educated youth in the capitals as much as in smaller towns. Moreover, the mass demonstrations have been, at least for the Balkan region, largely free of nationalist expression. In fact, corruption appears to have unified groups across religious and ethnic divisions, otherwise considered to be difficult to bridge.

Challenges for the Future

The recent rise of civic protest in both countries has given hope to the large number of active protestors and passive supporters who desire to live in a more equitable and transparent society. The creation of the Reformatorksi Blok in Bulgaria and the Gradjanski Plenum in Bosnia offer signs that a deeper, institutionally structured civil society platform could finally be able to lodge complaints with government officials that will actually be taken seriously. As actor and protest supporter Nermin Tulić explained in a recent speech, these citizens’ plenums create a “space for unity” or zajednički prostor, that seek to collect and capture the frustrations of the many.

Ironically, this harkens back to the 1989 mass protests in East Germany and Poland, where citizens’ groups collectively approached the communist party for wider reforms and the recognition of human rights. Pre-1989 anti-communist groups could not only more credibly articulate their demands, their governmental counterparts were also very clearly undemocratic. Under the current conditions, Southeastern European political culture is one where “the other” is the corrupt actor. For both countries, this could prove to be a pivotal moment in which a strong civil society emerges as a counterweight to weak governance in a way that could also strengthen earlier demands, namely those for democracy.

In the wake of the Bulgarian and Bosnian protests, political leaders are now slowly realizing the necessity for action: Bosnian Interior Minister Fahrudin Radončić publicly expressed his understanding for protestors’ demands, describing unrest driven by “seventeen years of poor governance” and “the children of parents who don’t have bread.” If anything, the children are maturing into credible social stakeholders.

Lili Nikolova is an independent researcher in the area of conflict prevention. Dr. Alexander Mirescu is at Saint Peter’s University, Department of Political Science.