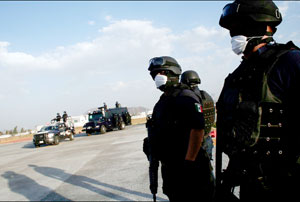 Federal police during the arrest of a member of the Gulf crime cartel in Matamoros, Tamaulipas, Mexico. (Jesus Villaseca Pérez/Latitudes Press/Flickr)

Yet today, criminal violence poses threats to human and international security that sometimes rival those posed by political violence. For example, homicide rates in Central America match those in the major global war zones. Just a few weeks ago, the UN Security Council adopted sanctions for the Central African Republic and Democratic Republic of the Congo targeting the links between wildlife and resource trafficking, and ongoing conflict and fragility, in central Africa.

What is the Crime Trap?

Almost $1 trillion per year is drained from developing countries through illicit flows. That represents significant capital, siphoned away from licit economic growth and development, into private pockets, offshore havens, and underworld networks. But the development benefits lost as a result are probably worth significantly more than $1 trillion, once the foregone economic growth, reduced costs of borrowing, and other economic knock-on factors are taken into account.

A 2011 World Bank report estimated, for example, that Central America lost 8% of its GDP through criminal violence. The World Economic Forum finds crime a major drag on business in the region. Illicit outflows coexist with pervasive corruption and criminality, and we know that these factors corrode social capital and state legitimacy, providing a further drag on development.

In fact, we are still learning about the variety of unexpected negative impacts that crime has on sustainable development: just this week, research involving United Nations University’s Dr. David Wrathall was published in Science showing that narcotrafficking promotes deforestation and loss of biodiversity.

Communities in the grip of rulers with criminal agendas live in highly authoritarian, exploitative, and gender-discriminating societies. Crime-related violence takes a significant toll on health, both physical and mental, creating burdens on the health sector. Yet the pursuit of criminal agendas rarely involves investment in accessible healthcare—let alone education, or even infrastructure. Even when actors with criminal agendas start down the statemaking path, like some of the warlords in Afghanistan, their development agendas are usually limited to maintaining control of the local labor force for the purpose of extracting criminal rents. Criminal agendas are all about maximizing criminal rents–not investing in public development.

Communities in the grip of criminal agendas consequently risk becoming junky economies.  They suffer a kind of Dutch disease, with economic inputs (labor, capital, and land) being sucked steadily into the criminal economy, and legitimate small and medium enterprises turned into zombie vehicles for criminal activity. With workers deskilled and populations increasingly dependent on illicit income sources, struggling in the trap just seems to make things worse.

We are just beginning to understand the complex mechanisms of this crime trap. The World Development Report 2011 helped to highlight some of the structural connections between fragility and crime at the national level, but to date, we lack a clear framework for tracing development impacts from the local level up. Without such a framework, we will struggle to understand this trap–let alone find ways to help communities break free of it.

Yet the outlines of such an analytical framework are now beginning to emerge. It seems to involve:

1) identifying and monitoring local criminal rents and the actors that seek to strategically exploit them;

2) figuring out how these rents translate into social, military, and political power;

3) looking at how this may allow those with criminal agendas to spoil peacemaking processes, and capture political, economic, and institutional transitions; and

4) costing out the resulting institutional, economic, and social fragility impacts.

There is no time to lose in fleshing out this framework–not least because, without it, we cannot be sure that our current interventions are not in fact exacerbating the situation.  We take pains to do no harm; shouldn’t we be taking pains to do no crime?

There are in fact several reasons to think that some existing policies might, unwittingly, be fostering criminal agendas in fragile and transitional contexts.

For starters, development practice often now favors localization. But criminology tells us that if spending and policing decisions are pushed down, and anti-corruption and integrity systems are not, localized protection rackets and organized crime result.

Or take post-conflict elections. We need elections to imbue post-conflict political institutions with legitimacy.  But does a rush to elections risk rewarding those with access to cash and street muscle? We are just beginning to think the policy implications through, although we encounter this problem with alarming frequency in practice.

Breaking the crime trap will involve much more than simply creating checklists on criminal justice and corruption in our development planning. It requires coming to grips with how some political and military actors draw power from the illicit economy, and figuring out how to arrest those criminal agendas.

With a clearer framework for identifying the sources of criminal power, we may then be able to move beyond simply “doing no crime,” and begin to identify points of strategic leverage over these actors. There are lessons to be learned from a variety of contexts about how to pull these levers. But adapting those lessons to the specific, often highly fragile, institutionally fragmented development contexts of communities trapped in crime will take time. Encouragingly though, some donors, such as USAID, are already beginning to look in this direction.

But a concerted research effort is needed. Otherwise, the chances are that we will continue to behave like most animals caught in a trap: using up a lot of energy and time to make a lot of noise and activity, but ultimately producing a rather unhappy ending.