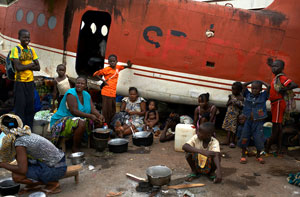 Fleeing violence, a family resettles in the burnt-out shell of a light aircraft at Bangui International Airport, December 2013. (UNHCR/S. Phelps)

Two months after the beginning of the French/African Union intervention in the Central African Republic, the situation continues to be volatile, with communal violence still taking place in the capital city as well as in the countryside. This begs the question as to whether assumptions made by the international actors on the ground and the international community—assumptions that informed the intervention strategies—were correct or not.

In March 2013, the overthrow of CAR’s President François Bozizé hardly made international headlines, and when it did, it was because South African soldiers were involved in a badly planned military adventure. Outside Bangui, however, the security situation was bad, and it took a turn for the worse in May when the new president, to regain some leverage in the capital city, sent Seleka fighters to all prefectures, and massive looting and mass killings took place in the countryside for reasons that still seem to defy logic.

International NGOs mobilized themselves a few months later and tried to get the attention of world leaders, especially in Europe and France. They rightly argued that patterns of insecurity in CAR after March 24 showed that incremental improvement could not be expected, and that action needed to be taken to save lives, reassert a sense of law and order, and pressure the government to care about its own population. Meanwhile, CAR’s ministers spent their time travelling overseas, and CAR’s president signed dubious mining contracts with foreign companies.

It was only after France’s President François Hollande returned from his mid-August vacation that he acknowledged the situation in CAR had deteriorated to an unacceptable level, and that the international community should intervene. Once it realized the situation, however, France failed in its public diplomacy to get its European partners and other international players on board. France got into an argument with the UK on the use of European money to fund an African Union (AU) force in CAR, as London wanted maximum effort put into Somalia and the AU’s mission there, AMISOM. France was also unable to get US support for a UN peacekeeping operation that was seen as too costly in Washington and not a timely response to the situation, since it required at least six months to deploy.

Had France been less eager to endorse the regional policies that allowed the Seleka to take power in March and more vocal on calling attention to a dysfunctional MICOPAX force (led by the Economic Community of Central African States) and the growing predicament of the CAR population in and outside Bangui, it could have helped build a narrative of a crisis that deserved an international intervention. But France was busy in Mali and planning an unlikely military intervention in Syria.

Of course, France alone cannot be blamed: at least it grasped the crisis, even if late, while other players—not always for honorable reasons—failed to respond. Europe, for example, was happy to let France take the lead and the accompanying risks, not least those associated with accusations of neocolonialism. The UN initially missed (or ignored) the warning signs for months, which brings into question the usefulness of the UN Integrated Peacebuilding Office in the Central African Republic (BINUCA), especially since it has been in country for more than 10 years and was unable to grasp the situation. The world body then pulled too many qualified staff out of CAR and struggled to shift from a peacebuilding-and-development approach to the kind needed for a complex emergency. The African Union’s MISCA mission, on the other hand, was able to deploy new contingents quickly. But MISCA also inherited all the problems its predecessor MICOPAX was unable to solve.

France’s response is worth unpacking. At first, the French plan to assist CAR was to support an African force in the same way it had assisted the Economic Community of Central African States’ FOMAC and MICOPAX operations for nearly 10 years—the French “Boali” contingent had provided technical and operational assistance with a relatively limited number of troops. Events on the ground quickly belied this reasoning. The French intervention was not planned to start when it did; it was thought the earliest time would be after the meeting on CAR organized at Elysée Palace on December 7, or even in the following week when the MISCA mission was organizing itself on the ground. But the December 5 anti-balaka offensive on Bangui obliged the French to intervene even before all its troops were on the ground, and only hours after the UN Security Council Resolution 2127 on CAR was passed.

A second mistake was the assumption that French troops could repeat their recent success in northern Mali, but this idea was flawed in many regards. As in northern Mali, which very much provided the framework defined by the Centre de Planification et de Contrôle des Operations (CPCO), the situation on the ground was seen as highly polarized in CAR. The Seleka played the role of the armed groups in northern Mali and would escape or disarm as soon as the French troops intervened. It was thought that all actors would be very fearful of the French soldiers and comply with their orders, as they had with the inter-African force during the mutinies in 1996 and 1997. Elections, as in Mali, would be organized as quickly as possible to provide a legitimate leadership that would carry out reforms. There was no mention in that plan of the anti-balaka militias that emerged in response to the Seleka.

Events on the ground proved the French planners wrong on important issues. The Seleka fighters may have behaved like thugs but, due to the mass killings of Muslims by anti-balaka militias in the second half of the year, they were seen as the sole protector of the Muslim community. Some played by the book and stayed idle in Camp Kassai or Camp de Roux, while others left Bangui. Some hung up their military fatigues and went into Muslim neighborhoods to protect relatives, and a few got involved in hit squads who performed targeted killings in Christian areas. But the Muslim population did not dissociate itself from the Seleka. The latter also took on the French soldiers on several occasions and proved that it was not invincible. The disarmament went from bad to worse since the French troops focused on Seleka fighters and left the anti-balaka to operate without much interference.

The failure to account for the anti-balaka militias has increasingly become a strategic mistake that France is likely to pay a high political price for. First, the French did not take seriously information about Bozizé’s role in launching the offensive on December 5. They also were unable to preempt the merging of the genuine anti-balaka groups with elements of CAR’s armed forces (FACA)—some in favor of Bozizé, many just willing to settle scores with the Seleka. They could not act against a rioting youth—many of whom were first recruited into the pro-Bozizé COCORA (Coalition of citizen opposition to armed rebellion), then into the Seleka after March 24, and then switched again, this time to the other side in order to partipate in looting. Footage from several journalists proves that French Special Forces had ambiguous relationships with some anti-balaka commanders, who are former FACA officers. For many people in CAR, this proves that France has chosen sides. They found further evidence in the public support provided for days by the French diplomats to Josue Binoua as a presidential candidate, an operative of Bozizé and his successor Michel Djotodia, when Binoua wanted to take Djotodia’s seat (only lately has France campaigned for the current president, Catherine Samba-Panza).

The French justification for not tackling the anti-balaka is that the mandate does not allow the international troops to react forcefully in front of civilians, and indeed the anti-balaka have few war weapons. But this powerlessness could have been contained by strong measures taken at the time the anti-balaka militias were attacking. This predicament also calls into question the international passivity toward François Bozizé and his supporters, who may have influence over half of the anti-balaka units—one of his sons was in Bouar at the end of January, when violence escalated there, and many of his lieutenants are moving in Bangui during daylight hours without any interference.

Ultimately, the French decisionmakers underestimated the complexity of the situation and were not able to frame political messages in a way that would have preserved their neutrality and goodwill. At a time when they should have paid attention to the situation in the north, they actually micromanaged the setting up of a new cabinet in Bangui. While they are fully aware that the former national army (FACA) is not a republican army—since it harassed civilians and was recruiting massively in Bozizé’s ethnic group—they share the belief of many other international actors that those FACA could be reinstated and that DDR is the solution.

To the public, the French tend to describe the situation as increasingly under control, but the current situation is still punctuated by violence. In Bangui, people slowly are getting back to work, but a former minister (and his son) connected to the Seleka was butchered in the city center in broad daylight. Bangui increasingly looks like a city at war, with some areas becoming 100% religiously homogeneous, and others completely lacking the rule of law. In the latter, people have been killed and houses looted before the MISCA or the French troops arrive. Miskine, once a vibrant neighborhood of Bangui, is the best example of this trend.

There is evidence now that the Seleka are disappearing from Bangui, but weapons continue to be brought to Muslim areas, since the international forces have proven unable to protect Muslim civilians. Outside Bangui, the situation is becoming more polarized. Reprisals and violence take place routinely. The Seleka contingents sent their families to safe havens in the north and are preparing themselves for a confrontation. When Muslim civilians are asked to leave, new fighters are brought either from Chad or from northern CAR. The strategic town of Sibut, once under MISCA supervision, was retaken by Seleka, forcing the few remaining MISCA troops to flee to Bangui. It is difficult to foresee what may happen since the numerous Seleka military leaders increasingly agree to disagree. Some want to destroy Bangui before going back home, while others would like to act in a more measured manner to bargain for positions and amnesty.

The anti-balaka, especially those under Bozizé’s influence, are pushing to take over small cities and put themselves in a better bargaining position vis-à-vis the new power. Adopting the Seleka’s undiscriminating approach, the anti-balaka also settle scores with the Muslim communities regardless of their allegiances to the Seleka. The pastoral Peulh communities are suffering as a result and losing their livestock. This dynamic raises the question of the continuing existence of a Muslim community in CAR. By killing and expelling a large part of its business elites, CAR is not setting the stage for recovery, but for a longer economic collapse, repeating somewhat what happened in Uganda after 1972.

By missing political opportunities and being absorbed by tactical decisions, the international intervention is actually providing room for the self-fulfilling prophecy that guided the intervention. On the one hand, many Muslims are now becoming convinced that secession could be an option, despite everything from politics to demography. This will provide space for military entrepreneurs sooner or later since there is little hope that drastic changes will take place with this new cabinet.

On the other hand, this move toward religious cleansing strikes a chord far beyond CAR. The allegations about Islamists’ presence in the Seleka ranks have proven wrong two months into the international intervention in CAR. Communal violence is the leading dimension of the current crisis. But with time, things change.  More than the mess in CAR itself, the unbalanced international intervention is the stronger reason for more radical action.

Roland Marchal is a CNRS researcher based at CERI/Sciences Po, Paris.