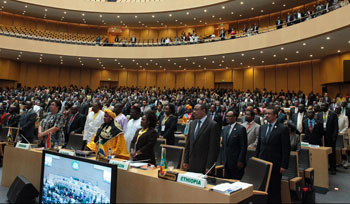 Convened under the theme of agriculture and food security in Africa, the 22nd summit of the African Union (AU) took place January 24-31 in Addis Ababa and was largely dominated by discussions about ongoing peace and security concerns across the continent, particularly in the Central African Republic (CAR) and South Sudan. The summit was also the occasion for regional leaders to reaffirm their commitment “to speak with one voice” on issues of interest for the continent. However, based on the topics—from the demand for a necessary reform of the United Nations Security Council, to threats not to attend a European Union-AU summit in Brussels unless President Robert Mugabe from Zimbabwe was invited along with his peers, to a regional response to perceptions about the International Criminal Court’s work in Africa—the call for unity among African leaders raises questions about its actual beneficiaries: those leaders and their political interests, or the African people.

In the midst of crises in two neighboring countries–both with potential regional ramifications–which caused the death of thousands of people, the displacement of hundreds of thousands, and severe destruction with dire humanitarian consequences, the recent AU summit in Addis Ababa could hardly focus on agriculture and food security. Security concerns in CAR and South Sudan overshadowed the original summit theme, and calls were made for greater effort by African countries to take the lead in putting an end to conflicts on the continent.

In that regard, the summit saw the early stages of operationalization of the African Capacity for Immediate Response to Crises (ACIRC), a transitional rapid reaction force established in May 2013 to supplement the delayed establishment of the African Standby Force (ASF) and its Rapid Deployment Capacity. Another progress was noted in Madagascar’s readmission into the AU after five years of suspension, following the December 2013 presidential election that saw the victory of President Hery Rajaonarimampianina.

Beyond these various developments, an interesting feature of the January summit was African leaders’ call for unity in defense of the organization’s common positions. As the AU continues to grow in assertiveness, its member states are encouraged to stand together and promote a consensus view on what seem to be the continent’s interests. This is the case of a reform of United Nations institutions, called for since 2005 in two regional documents, namely the Common African Position on the Proposed Reform of the United Nations (the Ezulwini Consensus) and the Sirte Declaration, “to ensure Africa’s legitimate rights to a fair and equitable geographical representation.” Discussions at the Addis Ababa summit recalled that there are 90,000 peacekeepers currently deployed in Africa by both the UN and the AU, at an estimated cost of $6 billion USD per year–covered mostly by the UN and the AU’s partners. Moreover, 70 percent of the issues tabled for discussion at the Security Council are about Africa, and of the 53 resolutions adopted by the Council since January 2013, 30 were specific to African situations.

Thus, the need to reform the Security Council appears legitimate, and calls for Africa to speak cohesively and with one voice to demand for two additional non-permanent seats on the Council, with at least two permanent seats (including veto power), would be defensible except for their limited realism. In fact, beyond the continent’s delay in putting forward at least one country for a permanent seat on the Council, criteria including military capacity and financial contribution to the UN budget essentially prevent a larger and more powerful African representation on the Security Council.

On the margins of the Addis Ababa summit, a second call to regional solidarity resulted from the unanticipated election of Zimbabwe’s President Robert Mugabe as first Deputy-Chair of the AU Bureau. With a rotating seat due to the Southern African region for the current year, President Mugabe was elected after Mozambique gave up its turn in anticipation of the country’s presidential election scheduled for October. The election of the Zimbabwean leader as the new AU Deputy Chairperson makes him eligible for the AU chairmanship in 2015.

However, despite being endorsed by both the AU and the regional Southern African Development Community (SADC), President Mugabe’s re-election in July 2013 has been disputed by opposition parties and civil society groups nationally, which denounced vote rigging and other irregularities. Moreover, the Zimbabwean leader and his wife remain the target of sanctions imposed on the country by the European Union in 2002 in protest of human rights abuses committed by the regime. In this context, African leaders’ decision to stand together and threaten to withdraw from an Africa-EU summit (planned for Brussels on April 2-3) if President Mugabe, who is under a travel ban to Europe, was not invited, raises additional questions about regional solidarity in the face of thwarted democratic and good governance principles.

Even more questionable was the call for unity during the summit to prevent criminal proceedings initiated by the International Criminal Court (ICC) against sitting heads of state. The indictment of (and arrest warrant against) Sudanese President Omar al-Bashir; the prosecution of Kenyan President Uhuru Kenyatta; and the ongoing trial of Kenya’s Vice-President William Ruto have caused unprecedented tensions between African leaders and the ICC. These tensions culminated in the October 2013 AU decision that “no charges shall be commenced or continued before any international court or tribunal against any serving AU head of state or government or anybody acting or entitled to act in such capacity during their term of office.” However, despite widespread condemnation of these attacks on the rejection of immunity for the authors of international crimes regardless of their official capacity, sanctioned by the failure to obtain from the Security Council a deferral of the proceedings against the Kenyan and Sudanese leaders–a request the Council has not acted upon in the case of President al-Bashir–African leaders remain committed to curtail the ICC’s proceedings against their peers.

Reminding AU member states to comply with their decisions on the ICC, and to ensure that they adhere to, and articulate, a consensus position, the summit called on African States Parties to the Rome Statute to “speak with one voice” to ensure that the amendments submitted ahead of the November 2013 meeting of the Assembly of States Parties in The Hague, which propose the deferral of prosecutions of sitting heads of state and seek to give them immunity during their term of office, are considered. Overlooking the need for justice of victims both of past human rights violations in Darfur and post-election Kenya, and of current and future mass atrocity crimes committed across the continent, this call for unity–opposed only by Botswana–hardly appears in the interest of African populations.

While speaking with one voice seems to have been successful in ensuring that President Mugabe was invited to the Brussels summit in April, unease with his election as AU Deputy Chairperson, and concerns about regional leaders’ attempts to undermine the foundations of the new international justice system continue to raise questions about the benefits African people derive from their leaders’ mutual solidarity. For the AU’s assertiveness and the solidarity sought by its representatives to resonate with ordinary African citizens, greater efforts are needed to synchronize this emerging voice with popular demands for enhanced governance and democracy, justice, and respect for the rule of law across the continent.