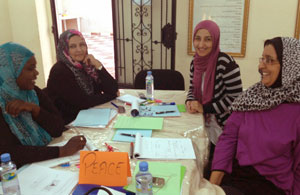 Ms. Just, who has worked in Libya, Syria, South Caucasus, Liberia, and Sudan, among others, said it takes community-based approaches to really address the multiple conflicts that are occurring.

And community-led processes, she said, can benefit the state at large. For example, Libya is suffering grave security problems, but at the community level, “it is possible to find [human security] solutions on a case-by-case basis.” She said these changes make a big difference in people’s everyday lives, and “ultimately [can] actually start shifting the overall security picture within the state, and therefore create more room for addressing the national security issues.”

Ms. Just has seen that all communities want the same thing: an end to the violence, and “some kind of transition to stability, to democracy, to justice, human rights, and so on.”

She said she has often seen communities distrust processes that are led by the international community or a civil society that is external to the setting, causing a sense within the affected community of “we want to do it our own way and on our terms.”

However, she said, many actors at the community level feel stuck. “They know that they want to reach out; they know that they want to be, for example, in dialogue with the other side. But they don’t know how.” She said the international community can play a very useful role in these situations by providing a space for people in conflict to have a conversation with each other.

Ms. Just said that one of the challenges she has seen—and this has been a personal challenge for her—is that “sometimes people in conflict arrive at solutions that seem very strange,” but “because they make sense at a local level, they are probably more likely to hold and more likely to be respected and implemented than solutions that I could have offered that were textbook.”

“This is what the processes of reconciliation are and should be. So, it’s about leaving space, I think, for local imagination.”

The interview was conducted by Andrea Ó Súilleabháin, Visiting Fellow at the International Peace Institute.

Andrea Ó Súilleabháin: I’m here today with Fleur Just, Director of Impact and Learning at the Peaceful Change Initiative, an NGO that works on change management and peacebuilding in the South Caucasus region as well as in Libya and Syria. Over the past decade, Fleur has worked on reconciliation and peacebuilding in many parts of the world, from Liberia and Sudan to Georgia and Timor-Leste. She is currently mapping community-level “peace resources” in Syria to enhance the participation of communities in Syrian peace processes.

Fleur, community-based approaches to security and peacebuilding are increasingly recognized as important for stability and sustainable peace. What do local peacebuilding activities bring that may be lacking in national and international processes?

Fleur Just: I think community-based approaches to peacebuilding enable the peace processes to really respond to the needs of people who have been at the front of the conflict. What we often see in modern conflicts is that it’s not just a conflict between a state party and a rebel group or between two rebel groups. Often there are multiple conflicts taking place actually within a conflict. And so if you have a process that just involves the key fighting parties, you might get an agreement between those, but that agreement will not necessarily address all the other conflicts that are actually occurring on the ground. And so you do need community-based approaches to really address the multiple conflicts that are occurring.

Often when you bring together the belligerent parties in an official process, their needs are not necessarily the same needs as communities, and whoever is at the negotiating table is not necessarily particularly representative of communities. And so it’s very important to have some form of process that can enable communities’ needs to be heard and communities to have a voice so that the overall peace process is responsive to those needs. We’ve seen some very clear examples of that in the work that the Peaceful Change Initiative has been doing.

For example, in Libya, when you talk about security at the governmental level, that is interpreted as state security—and solutions to state security seem very difficult to find in the current environment in Libya. But if you’re talking at the community level, when people are talking about security, they are talking about the sort of human security, every day security issues that are actually possible to find solutions to on a case-by-case basis. And so if you’re working at the community level, you can start doing some really concrete work on security issues that make a big difference to people’s everyday lives and that ultimately start shifting the overall security picture within the state, and therefore create more room for addressing the national security issues.

AOS: In addition to this tidal shift that you’re describing—bringing actors together in local communities to address diverse conflicts, and this having an impact on overall security—how are these local peace and security initiatives best linked to national or even international processes? How can community-driven efforts yield broader political change, and do we need better mechanisms to make that happen?

FJ: I think there is no particular one way of linking communities to political processes that will work in every single country. At the moment in Syria, the Peaceful Change Initiative, together with our partner, CCSDS [the Centre for Civil Society and Development in Syria], we’re trying to map in nine provinces what are the relationships, what are the mechanisms, what are the processes that are in place and that can be used and strengthened for ensuring that, at the community level, there is some way of having a consultation with people who are involved in political processes.

And what we’re seeing is that that architecture is just very weak or not in place at all and needs to be built from scratch. And that’s very much about building faith in institutions and organizations. It’s about creating or building new ways of being in dialogue with each other. It’s about changing people’s perceptions of what their roles are when they are in leadership roles, whether they’re at the very, very grassroots levels or whether they’re working in civil society or whether they’re working in a political party. It’s very much a process, I think, creating those feedback loops between communities, civil society, and then the political actors.

AOS: Keeping in mind, as you said, that every country and community is different, are there any crosscutting issues in local communities in transition that we might not expect in our work here at UN headquarters?

FJ: I think a crosscutting theme for communities that are experiencing large-scale violence in their daily lives is security, just the need for security, for the violence to stop. And then some kind of transition to stability, to democracy, to justice, human rights, and so on. That is across the board.

What we are also seeing, I think, very much in Syria and also in our work in Libya, is unfortunately a real lack of trust at the community level in international processes and in processes that are led by civil society that is in exile or is external to the setting. That’s a very common theme that’s coming out. Another common theme is: we want to do it ourselves, and we want to do it our way.

And then for me, a common theme that I’ve seen in so many places no matter how desperate and dire the situation looks is a real capacity for imagination that people have to keep on hoping, to keep on working for a better future—which is deeply, deeply inspirational.

AOS: As you’ve just said, communities want to build peace their own way. Where does that leave the UN and other international actors who are engaged in peacebuilding?

FJ: Like I said before, there is this tendency towards distrust of the international community and this sense of “we want to do it our own way and on our terms.” At the same time, what I’ve also experienced is that many actors at the community level feel a little bit stuck. They know that they want to reach out; they know that they want to be, for example, in dialogue with the other side. But they don’t know how. I think, in those situations, the international community—NGOS, the UN and so forth—can play a very useful role in just providing a space for people in conflict to have a conversation with each other. And if they request “we need to learn more about this” or “we need to learn more about that,” then I think there’s also a role that people in the international community can play in sharing international expertise learned from many, many different countries and in many, many different settings.

So, I think that is a very, very useful role that we can play as long as it’s a role that is developed in consultation with people who are going through conflict. And then I think a real challenge—certainly this has been a personal challenge for me, and I imagine that it’s replicated in different organizations—is that sometimes people in conflict arrive at solutions that seem very strange to me. I’ve worked a lot, for example, in Liberia on reconciliation, and also in Darfur on local-level reconciliation. And some of the solutions that different groups came up with in their reconciliation processes seemed very antithetical to my ideas of what reconciliation should look like. But I think the reflection that I went through is that these solutions make sense at a local level, and because they make sense at a local level, they are probably more likely to hold and more likely to be respected and implemented than solutions that I could have offered that were textbook. This is what the processes of reconciliation are and should be. So, it’s about leaving space, I think, for local imagination.

AOS: Fleur, thanks for speaking with us today in the Global Observatory.