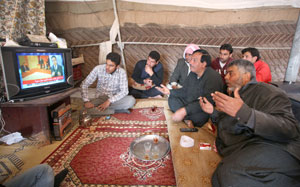 Syrian refugees watch news about the Geneva II peace talks from inside a makeshift tent home in an unofficial refugee camp on the outskirts of Amman, Jordan, January 22, 2014. (AP Photo/Mohammad Hannon)

Representatives from Bashar al-Assad’s government and the Syrian political opposition gather in Montreux, Switzerland, today for second-stage peace talks to end the conflict in Syria and agree on the broad parameters of a political transition.

Expectations are low for the Geneva II peace conference, and it is in fact off to a rocky start. Although discussions are likely to focus on ending the current conflict, improving the delivery of humanitarian aid, and on whether and how the current regime will participate in political reform, it is not too early to give some thought to what needs to happen in Syria’s social and economic sphere for a peaceful transition to take hold. Lessons from previous Middle East transitions can offer some insights here.

The architects of the Geneva Commuique and what comes after it need not look far for inspiration and important lessons as to how to reconstruct Syria peacefully and sustainably.  There are many recent examples of postconflict transition in the Middle East, and particularly in places of complex socio-religious composition and high international strategic interest: immediate postconflict reconstruction in Iraq (2003–2005), the Taif Agreement in Lebanon (1990), and the Gulf Cooperation Council Initiative in Yemen (2011).

In a recent paper, Planning Ahead: Lessons for a Post-Conflict Syria, I drew lessons from these experiences to inform policymakers’ efforts to support political transition in Syria—particularly when it comes to shoring up the state, revitalizing the economy, rebuilding the lives of those marginalized or displaced, and fostering regional cooperation.

As in Iraq in 2003, there may be a valid need to break up the power structures of the Syrian Baathist regime in an early transition phase. Many Iraqi state institutions were dismantled with a view to breaking up Saddam Hussein’s power base, stabilizing the country, and creating a new economic and political order. However, Iraq’s de-Baathification scheme demonstrated that a wholesale purge of state institutions is not effective in promoting stability or growth, and instead can intensify social, sectarian, and political divisions. This is particularly true when such an endeavor is not accompanied by efforts to shore up the state, which in Syria’s case would include encouraging the return and engagement of Syria’s talented civil service and business elite.

There may also be a tendency to pursue accelerated economic reforms in Syria, including a rapid shift to a market economy, to jump-start the Syrian economy. However, Iraq was declared “open for business” before a legitimate authority was in place and without support to its state-owned enterprises, the bedrock of the Iraqi economy.  This rush to liberalize Iraq’s industrial sector proved to be too much, too soon for an economy regaining its footing after war and for a political transition that had yet to begin.

With this in mind, pursuing economic growth ahead of political reform in Syria could prove to be a recipe for economic failure. The experience in Iraq suggests that in Syria it will be important to pursue economic growth alongside—and not in front of—political reform, and to forego rapid privatization in the name of promoting stability and sustainability in Syria’s economy and economic institutions.

When it comes to political reform, the 1990 Taif Agreement in neighboring Lebanon was a model agreement on paper that aimed to eliminate sectarian divides in government and society. It set out to do away with the “confessional” political system in Lebanon, which sought to distribute power proportionally among Christian, Sunni, and Shia communities. However in its implementation, Taif only reinforced sectarian structures and identities. By requiring equal power sharing between Christians and Muslims in government institutions, the agreement only served to reproduce confessionalism, albeit with a new, more balanced formula. This perpetuated competition among religious groups, leaving the door open for relapse into conflict.

Rather than follow in Lebanon’s footsteps and institutionalize sectarian identities, Syrians could focus on fostering a Syrian national identity and articulating a vision of the country’s future and a plan for its implementation. This could include, for example, initiating a national dialogue process that builds on the non-sectarian networks that have emerged in wartime.

The implementation of the Taif Agreement also failed to use reconstruction as an important lever of reconciliation by failing to return hundreds of thousands of IDPs to their homes. Up to 1 million people were displaced at the height of Lebanon’s civil war, driven from their homes by violent militias that systematically divided the country into Muslim and Christian sectors, and by Israeli military invasions. And while the Taif Agreement put reintegration of the displaced high on its postconflict reform agenda, this proved difficult to realize in practice. Reconstruction projects were not well coordinated with programs for return of IDPs. Ten years after the Taif Agreement, 450,000 people had yet to return to their places of origin in Lebanon.

This suggests that any political solution in Syria should include a viable and well-funded reconstruction plan focused on restoring essential services in areas of IDP and refugee return, many of whom could become agents of change if given the right incentives and tools.

In fact, when it comes to the future of Syria’s refugees, regional and international interests intersect, and this may be one of the very few areas where regional cooperation could be possible. The presence of 2.4 million Syrian refugees in neighboring countries threatens to both destabilize the region and reverse costly development gains. But lessons from the Gulf Cooperation Council Initiative in Yemen show that Yemen’s neighbors felt compelled to act jointly to protect mutually held security interests. Just as Gulf countries came together to support stability and reform in Yemen following its uprising in 2011, Syria’s neighbors and Western governments might find common purpose in supporting Syrian refugees and host communities  to ensure regional security and a means for dialogue on more divisive political issues.

While the transition from conflict to peace is different for every country, any plans for a transition in Syria should be informed by experience. Postconflict rebuilding is a marathon—not a sprint—that requires years of preparation and decades of implementation.  The future of the Syrian regime remains far from certain. But if a peaceful political transition in Syria is to be successful and lasting, the time to start planning for Syria’s future is right now.

Christina Bennett is an independent policy analyst who has worked for the United Nations and several international policy institutes on humanitarian, transition, and postconflict peacebuilding policy.