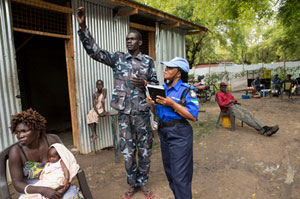 “It felt like a real battle to get human rights taken seriously at the level of senior management,” Mr. Bennett said of his first mission in Sierra Leone in 2000.  With an increase in resources, expertise, and integration in UN missions, “human rights is now in our DNA,” he said.

For example, when more than 1,000 civilians were killed in fighting in Jonglei State in South Sudan in December 2011 and January 2012, Mr. Bennett was able to put together a team to conduct an investigation on the ground and publish a report, he said.

However, for their work to be effective, “it’s critical that the reports that human rights officers produce are unimpeachable,” Mr. Bennett said. Any questions or discussions about these reports should not be “about the accuracy of the report, but about what to do about its conclusions.”

Ultimately, sensitivities can arise when human rights reports could affect the peacekeeping mission’s working relationship with the host government. “Many of us advocate that most human rights reports should be made public,” he said, but that can be uncomfortable because “they raise difficult issues for the government and sometimes for nongovernment entities in the countries concerned.”

He said the new dual reporting structure for human rights components in UN missions—reporting to both the Special Representative of the Secretary-General (SRSG) and the High Commissioner for Human Rights—has helped overcome this challenge. The SRSG and the High Commissioner can play different, complementary roles in this regard, according to Mr. Bennett. Since the former “live[s] in the country and deal[s] on an ongoing basis with the senior authorities of that country,” and the latter visits on more temporary bases, there is now greater leeway when it comes to reporting on human rights. “The head of human rights components has the opportunity to manage this to the benefit of all,” he said.

The interview was conducted by Warren Hoge, Senior Adviser for External Relations.

Warren Hoge: I’m in the Global Observatory today with Richard Bennett, who has served with the United Nations in senior human rights posts from 2000 until April, 2013. In particular, he has headed the human rights components of peacekeeping missions in Sierra Leone, Timor-Leste, Afghanistan, and South Sudan. I say “in particular” because I want to ask Richard about human rights functions in peacekeeping missions at a time when they have grown in number and size to the point where human rights components are now central to delivering Security Council mandates.

Richard, you bring the kind of information that I, as a former journalist, most treasure, and that is information directly from the field. How has this growth I just cited changed things on the ground for you as a human rights official from when you began this in 2000 to when you just finished up doing it in 2013?

Richard Bennett: I think in three ways. Firstly, the mandates for human rights from the Security Council are stronger and more comprehensive, and the mandates themselves, as well as the people on the ground, have helped to move human rights into the central position in peacekeeping operations and, as someone has said, human rights is now in our DNA.

Second, with those mandates have come more resources. I’m certainly not going to say there are enough resources, but there are significantly more. For example, when I started in Sierra Leone, in one of the, I would say, most serious crises that peacekeeping has experienced, in March-April 2000, I think we had about eight human rights officers. In many missions now, including in the one that I recently left in South Sudan, there can be up to 100 posts; I think in some, even more than 100. So that’s a growth.

WH: Richard, human rights components report to both the Special Representative of the Secretary-General, the SRSG, and the High Commissioner for Human Rights. Does that bilateral reporting, part of it to Geneva and part of it to New York, produce problems or does it actually ensure that decisions made in the Security Council or by OHCHR [Office of the High Commissioner for Human Rights] get translated properly on the ground?

RB: I think it’s a strength, and the head of human rights components has the opportunity to manage this to the benefit of all. Most of the work on the day-to-day basis, of course, is done in-country, and the most frequent interaction is with the SRSG and not with the High Commissioner.

But the High Commissioner can play a very important role. Let me give you a couple examples from South Sudan where I was recently. First, the High Commissioner can make a visit, and she did. She stayed for I think five days. She traveled to the region. She met with the senior officials. However, she only stayed five days. The SRSG has to live in the country and deal on an ongoing basis with the senior authorities of that country, be it South Sudan or anywhere else. That is a different kind of relationship.

Another area is in the area of public reports. Many of us advocate that most human rights reports should be made public. However, they can be uncomfortable. They raise difficult—almost by definition —they raise difficult issues for the government and sometimes for nongovernment entities in the countries concerned. The High Commissioner is consistently supportive of SRSGs. I’ve heard her say many times, “Look, if you want to put out this report, that’s fine. But if you’re more comfortable putting it out jointly I’ll do that with you, or even I will put it out myself as High Commissioner on your country’s situation. Let’s discuss that.” And so I think they do complement each other.

WH: Richard, can you describe exactly the duties and the functions of a human rights person in a peacekeeping mission?

RB: There are many, and I think I’ll begin by saying one of the duties and functions is to work alongside colleagues and to be providing human rights input to all sorts of other projects and working groups, be they early warning, protection of civilians, gender conflict and related sexual violence, and so on. Also, on the more capacity-building side: rule of law issues and transitional justice, and so on. So working with others I think is the first thing.

The second is that bread and butter of human rights work is monitoring and reporting, and included in that is documentation. Human rights officers should not be sitting behind their desks most of the time. They need to be out getting reliable information: the eyes and ears of the mission. And it’s critical that the reports that human rights officers produce are unimpeachable—that the discussion is not about the accuracy of the report, but about what to do about its conclusions. So that’s another area.

And human rights officers are also involved with colleagues in protection of children’s rights, women’s rights, people with disabilities, and all sorts of other issues where discrimination has been in effect.

They also work to strengthen national institutions and national capacities. This often involves working closely with the National Human Rights Commission. For example, in Afghanistan with the Afghan Independent Human Rights Commission. But it’s equally important, together with colleagues, to work with other institutions that should be defending the human rights of the people of the country but often aren’t—especially the police, because they have an extremely important role to play, but also other groups such as military, prison staff, judicial officers, and the like.

And finally, work with civil society is important. Maintaining human rights in a country involves defending freedom of expression, freedom of assembly and association and movement. And where rights are repressed, then people working in civil society who may be critical of the powers that be tend often to be the first who come under pressure, and we have an important role in keeping those rights realized.

WH: One last question, and this is about your service on the ground. We’ve just attended an event in which the Under-Secretary-General Ameerah Haq told a story—and actually used you as an example—that the human rights person can sometimes be occupying a very lonely place in these missions abroad. And [she] said there was even a meeting one time, I think it was in Afghanistan, where she said “Richard showed up and I looked to people around the room and I could tell some of them were saying, ‘What is he doing here?’”

Nowadays, you have been doing this now for more than a dozen years. Compare that experience. If that indeed was the case, has that now gotten better? You mentioned that human rights is now in the DNA of these peacekeeping missions. Are you now more welcome in a meeting than you might have been in a mission a dozen years ago?

RB: Yes, I think so. My first mission was in Sierra Leone, and I must say that at times my colleagues, first of all, said they felt marginalized, and at times I did as well. It felt like a real battle to get human rights taken seriously at the level of senior management, and then of course that flowed down through the other ranks. And I’m sure that has improved a great deal, from my own experience.

Let me give you two examples. One, Nepal—it was a DPA situation rather than a DPKO, but I don’t think that matters. And the setup was a little different, with OHCHR having its own presence not connected to the DPA mission. But every time the UN country team had a meeting, it had a political report—that is, a political update from someone in UNMIN, the mission there—usually the SRSG or the head of political—and it had a human rights update from me. Those were the two standard agenda items. I think that speaks quite a lot to the distance things have moved.

And then to give a more recent example, when I went to South Sudan there was some very serious communal violence in Jonglei State. This was at the very end of December 2011 and January 2012. Well over 1,000 civilians were killed. And there, the senior management, the SRSG and others, helped me to put together a team to conduct an investigation and make a public report. And one of the differences between that and on subsequent occasions as well in South Sudan, and previously was that the cooperation and logistics were available. Previously, it would have been nearly impossible to be able to get hold of a helicopter to go to a place where there are no roads. But now that has moved, at least in some situations, where it’s urgent enough, it’s seen that the human rights officers, the human rights team needs to be properly supported in order to carry out its investigation and make its report.

WH: Richard Bennett, thank you very much for talking to the Global Observatory.

RB: Thank you very much for having me.