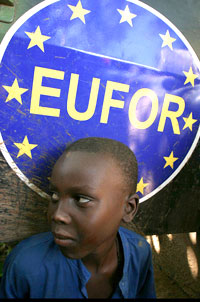 The Central African Republic (CAR) is poised to become the next theater of operations of a European Union (EU) military mission.  On January 10, a month after the outbreak of inter-religious atrocities in the chronically unstable African country, EU diplomats granted preliminary approval for the deployment of a joint contingent of up to 1,000 soldiers aimed at restoring security. The decision comes following intense diplomatic pressure from France, which is so far the only European country with boots on the ground.

If endorsed by EU foreign ministers in Brussels on January 20, the proposed deployment will provide some respite to 1,600 French troops and a nearly 4,000-strong African contingent struggling to contain the violence.  However, the EU operation is likely to face a delayed launch and acute strategic and operational constraints once deployed, meaning that it may not necessarily alter the situation on the ground in a decisive fashion.

The EU contribution to stabilization efforts in CAR is not the equivalent of a rapid reaction force.  Draft proposals envisage that a military operation “would deploy rapidly.” However, EU policymakers’ scant appetite for military action so far and the political obstacles likely to stand in its way even once formally approved are not suggestive of swift action. Following the outbreak of systematic atrocities perpetrated by Muslim rebels (the Séléka group now formally disbanded) and self-defence Christian militias in which over 550 people were killed in the country’s capital Bangui in early December 2013, the EU skirted around the idea of sending armed personnel. UN Security Council Resolution 2127 of December 5 authorized a one-year deployment of the African-led Support Mission (MISCA), to protect civilians, to be backed by a French force, but was silent on any possible EU troop deployment.  The military dimension of the EU’s response was essentially limited to the provision of up to €50 million for MISCA and a pledge to “examine the use of relevant instruments to contribute towards the efforts under way.”

Exploratory talks aimed at fulfilling this commitment started last week with a draft concept presented by the High Representative of the European Union for Foreign Affairs and Security Policy, Catherine Ashton.  The approval in principle of force deployment is a positive step. However, grounding personnel in areas of active fighting would be significantly more complex and riskier than performing military training and policing (as is the case of the EU military missions in Mali, Somalia, Bosnia and the Horn of Africa).  The real prospect of confrontations in CAR makes it difficult to generate political will. The withdrawal of the 850-strong Chadian contingent (MISCA’s largest) from the capital on January 14 after they allegedly fired on demonstrators has reminded EU politicians of just how daunting involvement would be.

But with the UN High Commissioner for Human Rights noting that “without serious intervention, further attacks—including massive violations such as those that took place on December 5—may well reoccur,” the pressure is on. Foreign ministers will conduct an initial review of the proposal for a joint force on January 20 and are likely to consent in response to this international pressure and the promise to consider possible (military) engagement in mid-December.

But the plan will need sign off by each of the 28 member states—a process that is riddled with challenges as at least a handful of countries will have to agree to provide troops in order to give teeth to any consensus that might be reached.  In addition, even if putting the EU decision to a vote in the UN Security Council at this juncture would essentially be a formality aimed at securing the UN’s legal imprimatur, it could add further delays.

And successfully containing the security and humanitarian crisis requires that decisions be made about putting troops on the ground in a matter not of weeks, but days. Now there are nearly one million people internally displaced, over 750 deaths have been confirmed in Bangui alone, and the country is still on the precipice, as transitional arrangements which are meant to lead to presidential elections in late 2014 are fraught with uncertainty. Interim leader Michel Djotodia’s recent departure has shown just how fragile the political process is.  In this context, the pace of mobilization in Brussels contrasts starkly with the speed and scale at which the situation in CAR continues to unravel.

Even once full approval has been obtained, moreover, EU countries’ eagerness to keep the crisis at arms’ length may preclude the prompt deployment of personnel. In early December, Britain and Germany resolutely rejected sending troops due to concerns over potential losses.    This reasoning is entrenched among EU governments who face the daunting task of convincing skeptical domestic constituencies of the merits of such deployments. While the composition of any European multinational force is as yet uncertain, Belgium and Poland top the list of prospective troop contributors on the back of their logistical support for the French-AU hybrid endeavor already in the field.  But with the support of French voters for President Francois Hollande’s operation in CAR dwindling, his counterparts will remain anything but enthusiastic about coming forward with troop offers.

The prospects for deployment of a force capable of averting a humanitarian catastrophe remain scant.  Currently, the French contingent has focused on securing Bangui airport, where nearly 100,000 people are seeking protection. The AU force remains short of 2,000 military personnel, still waiting for critical input at a donors’ conference on February 1 in Addis Ababa in order to reach its full authorized strength of 6,000.  In these pressing circumstances, the arrival of European forces could, in theory, assist in breaking the cycle of killings and reprisals. EU-led patrols and policing operations could help protect civilians at risk of sectarian atrocities.  A boost to the number of troops in the capital could release some MISCA elements to patrol the Bangui-Bouar-Garou-Bouali corridor, easing the delivery of humanitarian aid.

However, the requirements imposed by the complex situation on the ground are unlikely to be met by the overall EU contribution. According to preliminary proposals, the EU mission would add up to at most 1,000 troops (and potentially as few as 500), with a radius of action confined to Bangui. This means the force would do little to restrain intercommunal violence and criminality raging in the countryside. At least 4,000 ex-Seleka fighters and anti-Balaka are engaged in a tit-for-tat cycle of killing, looting and kidnappings, enjoying impunity while the Central African armed forces, according to the UN Secretary-General, are “virtually non-existent.” This means that the EU force’s objective of “restoring security”–as initially suggested–will be fraught with significant obstacles.

Preventing the emergency from spiraling further out of control would require more than what EU policymakers are willing to offer. The possible addition of 1,000 troops would enlarge the total contingent in CAR to 5,600, and may bring with it critical equipment such as helicopters to enable the rapid mobilization of AU troops across the country.  In relative terms, it could become the EU’s second-largest military mission after EUNAVFOR Atalanta in the Horn of Africa. However, the contribution remains insufficient in overall terms when compared to the 9,000-strong UN peacekeeping mission (not including police) that would, according to the UN Secretary-General, be required  if the de-escalation of large-scale violence in CAR is to be achieved.

Wary of becoming embroiled in a complex African crisis, EU officials will likely be as eager to withdraw troops as they are reluctant to deploy them. Indeed, the EU deployment would be limited to no more than one year.  However, even if the EU contribution is too small to have a decisive impact, there is one way in which it may prove useful. The UN Secretary-General is likely to recommend the possible transformation of the French-backed MISCA into a UN peacekeeping operation (PKO) before early March.  The time and required enablers it would take to launch a fully-fledged PKO could be bridged by the prospective EU force. Under this likely scenario, if the EU’s contribution is to be meaningful then its mission would have to remain stationed and serve as a semi-stand-by force. This would be reminiscent of the EUFOR Tchad/CAR operation conducted in 2008-2009 with a mandate to protect civilians menaced by the Darfur crisis (arguably one EU’s most complex missions). However, hand over arrangements between the UN and the EU, at the strategic and operational levels, would have to be better coordinated in CAR if difficulties experienced by EUFOR Tchad/CAR are to avoided and the (possible) UN follow-on force is to reach its full strength in time.

The Pressure is on

Having rebuffed calls for troops in December, the EU seems now close to giving the go-ahead to the dispatch of its fifth active military mission, adding to the more than 7,000 EU personnel deployed globally. Sustained diplomatic activity by the Élysée Palace and Quai d’Orsay will be critical in orchestrating the required EU consensus on the shape of the operation. The EU reinforcements are a welcome step, but will likely be far from “rapid” and possibly insufficient to restore security. In positive terms, the mission may prove useful by performing a bridging operation in the likely event that a UN PKO is authorized in the next two months. But in general, amid heightening UN warnings of an “impending humanitarian disaster” in CAR, Brussels’ decision early next week is unlikely to represent a game changer in a deteriorating crisis that has portended genocide.

Ivonne Lockhart Smith is an international policy analyst at a law firm in London and has an MSc in Comparative Politics from the London School of Economics and Political Science.

About the photo: A boy in Sam Ouandja, northeast Central African Republic, leans against a EUFOR vehicle, May 2008. (credit: hdptcar/Flickr)