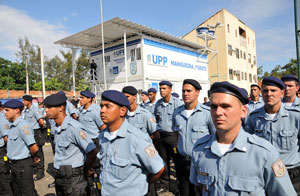 While Rio de Janeiro gears up to host the 2014 World Cup and 600,000 foreign tourists, health disasters such as the dengue fever epidemic in 2007 and 2008 loom large over discussions of human security. The epidemic totalled about 300,000 cases of this mosquito-borne illness, including 240 deaths, and I witnessed first hand how inundated hospitals closed their doors and left sick people to seek treatment at ad-hoc hydration tents scattered throughout the city.

The calamidade, or calamity, as locals called it, inflamed anxieties about personal health and safety in the city. Dengue fever, also called “breakbone fever” for the excruciating muscle, joint and bone pain it causes, is the world’s most rapidly spreading mosquito-borne viral disease. The number of dengue cases in Rio in 2013 was double that of 2012, and in 2014 the city is headed for a “situation of risk” for a dengue epidemic, according to Brazil’s minister of health.

It also exposed long-standing social cleavages: middle-class residents blamed the scourge on inhabitants of favelas from which waves of dengue supposedly emanated. State health agents with tools to stem the tide of infections either could not or would not access favelas controlled by outlaw regimes of narcotraffickers. The impasse exemplified how decades of political abandonment of Rio’s poor crippled the state’s ability to maintain order in favelas and hindered public health responses to serious disease threats.

Yet Rio’s dengue crisis also signaled an inflection point in the government’s stance towards favela communities. At the height of the epidemic, authorities ushered in new assemblages of public security in favelas in the form of Pacification Police Units (UPPs). With UPPs, Rio pivoted from a policy that historically neglected favelas, to one that intensely engaged them. Today, as the UPP project enters its sixth year, its public relations campaign circulates images of a friendly police force and claims that UPPs benefit more than 1.5 million residents in the pacified areas.

Critics dispute these numbers, however, and pacification policing is increasingly controversial. Nevertheless, UPPs reconfigure established practices of managing social difference in resource-poor settings of Rio de Janeiro, and offer a window into cultural assumptions about collective health, social control and the social worth of the poor in a post-authoritarian democracy.

Twenty percent of Rio’s 6.3 million residents, or approximately 1.3 million people, live in the city’s poorest, most densely populated communities, known as favelas. For the most part, the communities are tight-knit and vibrant, though many middle-class residents of Rio regard them as hives of disease and drug-related violence. This is because in the early 1980s, the Andean drug trade expanded into Brazil, and drug traffickers began competing with established favela resident associations, which for many years had secured votes for politicians in exchange for state services. As narcotraffickers consolidated their power in favelas—in part by employing local residents and helping the poor—hundreds of favelas across Rio became no-go zones for ordinary police.

As violence increased, a chronic sense of vulnerability pervaded favelas. Innocent bystanders caught in the crossfire during gunfights between Rio’s Special Police Operations Battalion (BOPE) and traficantes practically constituted an epidemic: stray bullets hit an average of one person per day in Rio in January 2007.

Besides violent crime, inadequate sanitation in favelas fueled the spread of dengue and other infectious diseases, which stirred insecurities about health and well-being: after it rained, standing water in accumulated discards such as bottles, cans and tires created ideal breeding grounds for Aedes aegypti mosquitoes that transmit dengue viruses.

Outbreaks of violence and disease that provoked anxieties about personal security extended to nearby middle-class neighborhoods. Homeowners fortified their condominiums with protective walls and armed guards to protect themselves from violent crime. It would prove harder to guard against mosquitoes.

Dengue’s “contagion” amounts to common shared exposures, such as standing water or accumulated refuse. Unlike HIV, which requires physical contact or transmission, mosquitoes do not discriminate. But the proximity of favelas to affluent housing makes mutual risk evident, and the poor make easy scapegoats.

Healthworkers say that the UPPs have made their jobs easier because they put an end to shootouts that previously interrupted their work and they can now inspect areas where traficantes had denied them access. At the same time, many express skepticism that the UPPs will last beyond the 2016 Olympic Games in Rio and consider them a token gesture at addressing insecurity in Rio aimed at international audiences.

Regardless, Rio’s UPP project continues to expand, with four additional units scheduled for installation in 2014. Leaders at all levels of government insist that the project is “here to stay.” Evidence shows that rates of violent crime decline significantly following installation of UPPs in favelas. Additionally, indicators show that modern infrastructure and regular waste removal services have replaced open sewers and garbage dumps at several UPP sites. This is clearly visible today in sections of Manguinhos, for example, where traficantes are no longer as visible, and there is hardly a trace of the mountain of trash that once existed here.

Yet claims are on the rise of human rights abuses at the hands of UPP officers. Five Manguinhos UPP officers were arrested in November 2013, charged with strangling to death an 18 year old. The next month, an 81-year-old man who clashed with police during a protest over the incarceration of a young boy from Manguinhos was found shot to death; while it is too early to know who is responsible, the fact that a number of Manguinhos residents accuse UPP officers of the crime exemplifies the tenor of fear and distrust towards UPPs in Manguinhos and other favelas.

UPPs also produce new social disparities. They operate in a relatively small number of the more than 1,000 favelas in Rio’s metropolitan area. The near singular focus on UPPs as the state’s mechanism of choice for channeling investments to resource-poor settings means that the majority of Rio’s favela inhabitants continue to see no benefit. In its first five years, the UPP project strategically focused on favelas located near or within the city’s so-called “belt of security,” which primarily encircles heavily touristed and affluent districts. Private investors are placing bets on UPP-occupied favelas, and gentrification is under way. By most measures, the quality of life in these neighborhoods is likely to improve, but for whom and at what cost?

It is unlikely that military policing of civilian populations in socially and economically marginalized populations will lead to effective and sustainable responses to grievances voiced during Brazil’s massive street demonstrations of 2013. Rio was not better off before UPPs. But the narrow focus of UPPs will neither counter government corruption and profligate spending on World Cup and Olympic stadiums, nor will it compensate for the frugality of budgets for health and education in Rio.

It took several decades of political abandonment of favelas to shape the deep social inequalities and complex disease ecologies that today characterize Rio de Janeiro. During roughly the same historical period, public health programs in Brazil and around the world retreated from vertically integrated, military-style disease eradication campaigns. The focus instead turned to community participation—an area in which Brazil is a leader—and approaches that recognize broad, structural determinants of health and disease.

UPPs can ameliorate local conditions in delimited territories of Rio de Janeiro, but the project’s sub-national scope and military methods do not gear UPPs to modify “big picture” issues related to entrenched structural inequities, public health concerns, and other fundamental causes of human insecurity. Given the rapid pace of change in Rio de Janeiro, and the varied perceptions of what this change portends, debate should continue about what “security” encompasses, how it relates to public health—and whether Rio is moving towards it.

Christopher Alley is a PhD candidate in medical anthropology at Columbia University. His dissertation, “Dengue Fever and Trash in Brazil: Politics of Responsibility in Favelas of Rio de Janeiro,” is based on 16 months of ethnographic fieldwork in Brazil, in collaboration with the Departamento de Serviço Social, Pontifícia Universidade Católica, and policy research he conducted as an intern with the World Health Organization’s Special Programme for Research and Training in Tropical Diseases (TDR/WHO) in Geneva, Switzerland.