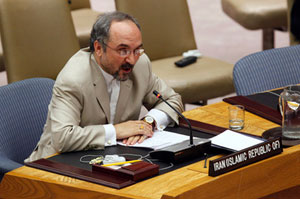 It is no secret that Iran has an image problem in the international arena. As part of a comprehensive campaign to regain credibility and improve its reputation on the world stage, the country is adopting a new approach to diplomacy that seems to extend well beyond the nuclear dossier. But President Rouhani’s attempts to remake the country’s foreign policy since his election last June have met with much suspicion, as many outside Iran fear that this leopard can’t change its spots.

Delegates in the UN General Assembly have been noticing a turnaround in the way that the country’s representatives engage with social, humanitarian, and human rights issues. In October, observers were taken aback by the palpable softening of Iran’s tone1 in the delegate’s reaction to the latest report of the UN Special Rapporteur on the human rights situation in Iran. In its statement, the Iranian representative to the Third Committee sounded conciliatory as she declared that “Iran emphasizes the need to use the momentum engendered by this election [of President Rouhani] to adopt a new and constructive approach by all relevant parties towards cooperation and dialogue for the promotion and protection of all human rights” adding that the “government does not claim that the situation of human rights within the country is perfect.”

In November, the same tone was apparent in the response of the Iranian Permanent Representative Mohammad Khazaee to the resolution presented by Canada on “the human rights situation in the Islamic Republic of Iran.” Though he still rejected the country-specific nature of the resolution—which Canada puts forward yearly—characterizing it as “politicized” and “subjective,” he also noted the country’s “long term approach,” “genuine measures,” and “constructive engagement” to safeguard all human rights, signaling future improvements.

However, the clearest evidence of this new approach is perhaps the effort to present the resolution, “A World Against Violent Extremism” to the General Assembly—to be voted on this week. Iran, traditionally perceived as a spoiler on humanitarian and human rights issues, has untypically chosen to be a main sponsor of a resolution attempting to build consensus around the subjects of violence and extremism.

Despite the fact that resolutions such as these have a mostly symbolic value, they are an indication that the new Iranian president has launched a wide-ranging diplomatic campaign attempting to change perceptions in areas such as human rights, humanitarian issues, and the culture of peace, which fall under the Third Committee of the General Assembly. In fact, the Permanent Representative of Iran has been personally invested in dozens of démarches—that is, hours and hours of discussions with other permanent representatives.

Debates that occur on agenda items such as “Culture of Peace”—under which Iran presented to the GA the “A World Against Violent Extremism” resolution—are usually followed by human rights experts of the diplomatic missions. Up until now, this is a context in which Iran has been consistently a reactionary force. Previously, Iran would be the country suggesting or supporting provocative language that caused splits among UN members on issues such as unilateral sanctions, drone strikes, or cultural relativist approaches to human rights, which effectively meant torpedoing potential compromise.

However, now Iran—itself the main sponsor of the resolution—is struggling to build bridges and promote consensus rather than trying to throw a wrench in the works. The level of personal involvement by the Iranian PR is remarkable and further evidence of Iran’s interest in presenting itself as a country that can play a constructive diplomatic role. This change of character might indeed be an indication of Iran’s interest in fundamentally changing its identity, and international relations theories on constructivism would support this.

The main challenge for Iran now might be the fears and suspicions regarding its true intentions. Delegates—mostly Western, though not only—are concerned that there may be hostile intentions lurking beneath the initiative, as well as behind the facade of a more moderate foreign policy in general from Iran.

Several indicators, however, seem to indicate that Iran is genuinely trying to be constructive. The initial draft put forward by Iran has nothing that may be construed as provocative. In fact, Iran demonstrated surprising flexibility during the negotiations over the text, satisfying the concerns of European countries on freedom of expression, and adding human rights language. The EU plans to make a statement on the day of the adoption, welcoming the positive engagement of Iran and its satisfaction with the addition of human rights language.

The Iranian text—in particular the sentence on “living together peacefully with neighbors, respect for political independence and the principle of sovereign equality of others”—also reflects a compromise between the Gulf Cooperation Council countries push for the addition of “non-interference in the neighbors’ affairs” to the resolution—a clear reference to Iran’s role in the region—and the rejection of the EU and other countries to such language; a solution that Iran has managed to reach through engaging into deep consultations with both sides in the margins of the negotiations. Even Israel has allegedly been actively engaged with Iran in the informal negotiations, though their final stance on the resolution remains unclear.

The US and Canada, on the other hand, have not participated in the negotiations, and it is also unknown how they will vote when the resolution is put to the vote on December 18, though despite the concerns, the sense is that member states would like to give Iran the opportunity to be a positive actor at the UN and have the resolution passed by consensus instead of taking it to a vote.

On the ground, Iranians can only hope that this diplomatic campaign will translate into improvements in their lives, and not just economically with the lifting of sanctions. The good intentions expressed by the Iranian Third Committee representative are not enough; the country needs to dramatically amend its ways. Rouhani has so far disappointed those who voted for him hoping he would address its human rights record. Executions have continued and, according to certain reports, even increased. Political prisoners have not been released from prison or house arrest. Dissident journalists and opposition activists report the continued intimidation and harassment of their families back in Iran. In a macabre twist, some consider this to be part of tradeoff with hardliners by which reformists appease conservatives with internal repression in order to gain flexibility in their foreign diplomatic dealings. It is also important to recognize that Iran’s foreign policy is not confined to diplomacy at the UN, and although Rouhani may be effecting change in the tone adopted at this international forum, there are other aspects of his country’s external relations that are being contested by more reactionary elements and might be beyond his control, in particular matters pertaining to military questions.

Ultimately, Iran’s efforts to improve its tarnished international image in the eyes of the international community are connected to the nuclear dossier, and in particular to addressing the suspicions and doubts about Iran that dog all things related to that rather hot file. While those representing Iran at the UN face some powerful domestic opponents, their international counterparts’ suspicions may ultimately be the biggest spoiler of all. With the right amount of cautious support, however, this change of roles could also bring about a change in identity—leading to a more moderate and engaged Iran playing a more constructive role in the region, including Syria, among the many other crises and conflicts in which it has a stake.

Helen Alkin is pursuing doctoral research at the University of Kent, United Kingdom. Jose Vericat is an Advisor at the International Peace Institute.

1“Speaking in English, the representative’s tone was markedly different from that of previous years, when the tone of the response has at times been openly hostile” (International Campaign for Human Rights in Iran)