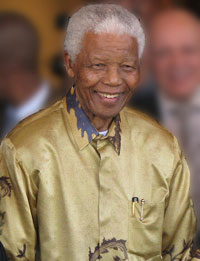 The news only reached me this morning here at my Cape Town home. It was not a shock because it had been expected. But a grey, heavy, and deep sadness descended. It was mixed with uncertainty and confusion because I did not know how to respond. I held back tears but am not sure why.

It is not that South Africa is now rudderless or that chaos will descend. We have come a long way since Nelson Mandela became president of the new South African democracy nineteen years ago. But in a way, with his death go the certainty and the clear direction towards a better future for our divided society. He had provided a virtual place of refuge to all South Africans who sought direction and inspiration to cope with and manage the turbulent times of our political transition. Even from his sick bed he represented the ultimate moral compass for all of us, black and white.

He was an amazing phenomenon in whose presence I felt a strange and overwhelming aura overcome me. It is indescribable. He radiated a combination of kindness, power, righteousness, justice, and wisdom for which the appropriate word (from the vocabulary of my kids) would perhaps be “awesome!” I have never experienced that awesome feeling with anyone else.

I was privileged to have met him on four occasions, always in a group context. Perhaps my daughter’s experience tells us more about Mandela than my own experiences. As a thirteen-year old schoolgirl in 1996, when Mandela was president of South Africa, she and a school friend found themselves in a small bookshop in the vicinity of his residence in Cape Town shortly before the evening closing time. Suddenly, the shop doors were closed because the tall President Mandela had just stepped in with two guards to do some shopping.

The few customers froze in their steps and were awe-struck. Fortunately, the innocence and enthusiasm of my daughter and her friend led them to instantly grab a piece of paper and pen and approach him with the request for an autograph. He smiled at them and commenced a light-hearted discussion with the two thirteen-year old white schoolgirls, wanting to know their names, who their parents were, which school they attended, what they were buying in the shop, etc. When they asked him for his autograph, he gave them hugs and wrote these words for my daughter on a piece of paper: “To Claudia, a future leader of South Africa. Nelson Mandela.”

This brief experience and these few words illustrate his warmth, generosity, humanity and inspirational nature. To say that he was an inspiration for young and old, black and white is therefore not a cliché—it is an understatement.

Now he is gone. But despite the many political and economic problems that we still face in South Africa, his influence and spirit have been powerful enough to leave a permanent imprint on this country. It is now up to us and the next generation to rise to the challenge and ensure that his vision is realized. May he rest in peace.

Peter Gastrow is a lawyer and former member of the South African Parliament who participated in the establishment of the 1991 National Peace Accord and chaired the Law and Order Subcouncil of the transitional government. He has also served as an Advocate of the Supreme Court of South Africa, and as a Senior Fellow at the International Peace Institute. He currently works as an independent consultant from Cape Town.