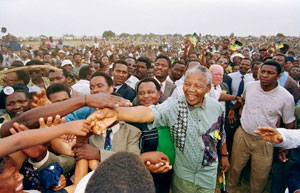 Nelson Rolihlahla Mandela was one of the greatest moral figures of the twentieth century. Winner of the Nobel Peace Prize in 1993, he was a nation-builder par excellence who did the most to unite a South Africa divided for decades by colonialism and apartheid and on the brink of a potential civil war. Mandela embodied a quasi-religious “prophetic” leadership that eventually freed his people from the bondage of apartheid by 1994. An often neglected part of his legacy is, however, his role as a pan-African icon.

Mandela’s struggle for South Africa’s liberation and pan-African solidarity also embraced prophetic rule. The charismatic leader of the African National Congress (ANC) was able to build up and maintain a devoted following in South Africa, Africa, and its diaspora even during almost three decades in jail. Mandela’s presidency, from 1994 to 1999, could also be seen in prophetic terms, as he sought to reconcile a deeply divided society, heal a conflict-ridden continent, and build bridges with the African Diaspora. His rule thus represented prophetic nation-building, continental renewal, and diasporic solidarity.

The younger Mandela read the writings of pan-Africanists like Trinidad’s George Padmore and Ghana’s Kwame Nkrumah. At first inspired by Gandhian tactics of “passive resistance,” he would eventually come to play a leadership role in the Defiance Campaign of 1952, before initiating the “armed struggle” that led to a life sentence in 1964. As Madiba memorably put it, quoting an African proverb: “the attacks of the wild beast cannot be averted with only bare hands.”

Madiba’s visit to Tanzania, Ethiopia, Zambia, Egypt, Tunisia, Morocco, Algeria, Ghana, Senegal, and Guinea in 1962 had a profound impact on him, providing great insights into continental diplomacy and the tactics of other liberation movements. He was particularly influenced by Algeria’s Front de Libération Nationale, and had always adopted a much broader pan-African vision of his country’s struggle, as the name of his party—whose members were sheltered during the apartheid struggle by many neighboring countries, at huge costs to themselves—suggested.

Mandela was widely celebrated during his lifetime as a political saint. As president, he came to symbolize his country’s racial reconciliation. The charisma of this “founding father” helped South Africa’s young, democratic institutions to flower after 1994, and gave the country an international stature of which a former global pariah could never have dreamed.

In contrast to Africa’s other post-independence “founding fathers” such as Ghana’s Kwame Nkrumah, Zambia’s Kenneth Kaunda, Kenya’s Jomo Kenyatta, Senegal’s Léopold Senghor, and Tanzania’s Julius Nyerere, he bowed out gracefully at the end of his first presidential term in 1999, setting a standard for future African leaders aspiring to greatness. As Kenyan scholar Ali Mazrui noted: “If in the last half of the twentieth century there was one single statesman in the world who came closest to being morally number one among leaders of the human race, Nelson Mandela was probably such a person.” In a similar vein, Kofi Annan, the Ghanaian former United Nations (UN) Secretary-General and Nobel peace laureate wrote: “To this day, Madiba remains probably the single most admired, most respected international figure in the entire world.”

One of Mandela’s lasting legacies will be his efforts—not always successful—at promoting national and international peacemaking. He tirelessly reached out to his former enemies at home, and led peacemaking efforts in Burundi, the Democratic Republic of the Congo (DRC), and Lesotho. During his presidency, South Africa largely shunned a military role for fear of arousing allegations of hegemonic domination, since the apartheid army had been particularly destructive in Southern Africa. In what came to be known by some as the “Mandela Doctrine,” Madiba told his fellow leaders at the Organisation of African Unity (OAU) summit in Ouagadougou, Burkina Faso, in 1998: “Africa has a right and a duty to intervene to root out tyranny… [W]e must all accept that we cannot abuse the concept of national sovereignty to deny the rest of the continent the right and duty to intervene when behind those sovereign boundaries, people are being slaughtered to protect tyranny.” Though Mandela courageously sought to champion human rights in Africa, he was politically hurt and diplomatically isolated on the continent by a bruising diplomatic battle with General Sani Abacha after the Nigerian autocrat had brutally hanged Ken Saro-Wiwa and eight Ogoni activists in November 1995.

As president, despite Western pressure—especially from Washington—Mandela consistently upheld personal loyalty, and insisted on maintaining his close friendship with Libya’s Muammar Qaddafi and Cuba’s Fidel Castro, both of whom had supported the ANC’s liberation struggle. This loyalty was to serve Mandela well in brokering a deal in 1999 on the Lockerbie airline bombing of 1988—blamed on Libya by the United States (US) and Britain—which eventually lifted UN sanctions on Tripoli (imposed in 1992) by 2003. After 2000, however, Mandela did forego personal loyalty and a conscious post-retirement decision always to be supportive of his successor, when he began to criticize Thabo Mbeki’s government and pushed for the provision of anti-retroviral drugs to HIV/AIDS sufferers in South Africa, where 5 million people had been afflicted by the pandemic. This was a battle that Mandela—much to his later regret—had neglected during his own tenure in office.

Mandela did not just fight injustice in South Africa and Africa; he also fought for the rights of all oppressed and impoverished people around the globe. Even after retiring from office, South Africa’s political prophet employed his incredible moral stature to become one of the fiercest critics of American president George W. Bush’s invasion of Iraq in 2003. As Madiba wondered: “Why does the United States behave so arrogantly?… Who are they now to pretend that they are the policeman of the world?” Mandela also spoke for the majority of what Martiniquan intellectual Frantz Fanon described as “The Wretched of the Earth”—an expression Mandela used in his Nobel Prize speech in 1993—in an address of profound humanity commemorating the UN’s fiftieth anniversary in New York in October 1995: “What challenges us, who define ourselves as statespersons, is the clarion call to dare to think that what we are about is people—the proverbial man and woman in the street. These, the poor, the hungry, the victims of petty tyrants, the objectives of policy, demand change.”

Nigerian Nobel literature laureate Wole Soyinka regarded Mandela as the very expression of “a humanistic will and political vision” and “a symbol of the culture of dialogue backed by an unparalleled generosity of spirit.” For Soyinka, Mandela was an icon and globally recognized symbol of his country’s freedom who was constrained from defining his own identity beyond the mythical figure that his party and supporters had created for him. In the Nobel laureate’s 1988 collection of poems, Mandela’s Earth, Soyinka wrote:

Your bounty threatens me, Mandela, that taut
Drumskin of your heart on which our millions Dance. I fear we latch, fat leeches
On your veins . . .
What will be left of you, Mandela?

Cornel West, an African American scholar at Princeton University, placed Mandela in the context of a “grand democratic legacy” stretching back to Socrates. Moving from the universalist Greek philosopher, West described Mandela as an heir of pan-African prophets like W.E.B. Du Bois, George Padmore, Martin Luther King, Malcolm X, and Patrice Lumumba. He also depicted Madiba as a secular prophet, an African Moses leading his people to the promised land from the oppression of white Pharaohs. Madiba urged his people to be set free, and then performed the “miracle” of the improbable democratic transition in South Africa’s own version of the parting of the Red Sea. West, however, warned against making Mandela “some kind of icon on a pedestal belonging to a museum,” exuberantly describing him as the “jazzman of the freedom struggle.”

As a young student at Occidental College in 1979, the first black president of the US, Barack Obama, first became politically active when he engaged in the anti-apartheid struggle that sought to impose sanctions on the racist regime in South Africa. Obama counts Mandela as one of his greatest political mentors, and met him as a junior American senator while Madiba was visiting Washington D.C. in 2005: the only time the first black presidents of South Africa and the US ever met.

Reinforcing the link to the African Diaspora, in a speech to the US Congress in October 1994, Mandela quoted his fellow Nobel peace laureate Martin Luther King Jr.’s famous words from an old Negro spiritual, uttered during the 1963 “March on Washington”: “Free at last, free at last, thank God Almighty we are free at last!” Two of the twentieth century’s greatest pan-African struggles–the civil rights and anti-apartheid battles–were thus inextricably linked.

Madiba’s historical significance as the “founding father” of a democratic South Africa will be similar to that of George Washington for America and Mahatma Gandhi for India. Mandela was a pan-African prophet who was honored in his own land and across the globe. His enduring legacy will be his export to the world of the pan-African spirit of ubuntu: the gift of discovering our shared humanity.

Dr. Adekeye Adebajo is Executive Director of the Centre for Conflict Resolution in Cape Town, and editor of Africa’s Peacemakers: Nobel Peace Laureates of African Descent. A version of this article was first published in The Sunday Independent (South Africa), December 8, 2013.