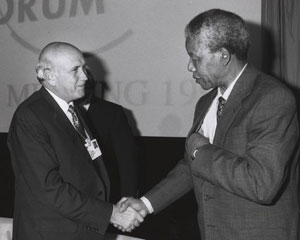 I was the US consul general in Johannesburg, South Africa from August 1990-June 1993, the years of transition from apartheid to non-racial multiparty democracy. After 27 years in prison, Nelson Mandela had been released from Victor Verster prison, outside Capetown, six months before my arrival. As the head of the African National Congress (ANC), Mandela was the recognized leader of the movement for constitutional and political change.

But in the fall of 1990, it was far from clear that the transition would succeed and that massive violence could be averted. Mandela had made clear his goals even before being released from prison: free and fair elections in which all South Africans, regardless of race, could participate; the release of all political prisoners; and the adoption of a new non-racial multiparty constitution. President F.W. de Klerk had agreed to these conditions, but was hoping to preserve Afrikaaner power, privilege, and culture.

Mandela in those years worked from the ANC headquarters in Johannesburg, not far from the consulate, and from his home in Soweto. He was later to move to the northern suburbs of Johannesburg. I saw him periodically at book launches and other public events. Mandela was the driving force in the ANC, but his role and politics were not unchallenged. The ANC was split between moderate elements who supported Mandela’s goal of national reconciliation and a more radical wing led by COSATU trade union activists and his wife Winnie Mandela who enjoyed great influence with the youth in Soweto which favored a more confrontational approach as well as a major redistribution of economic as well as political power.

Most serious was the pervasive violence between the supporters of the ANC, mostly Xhosa, and the Inkatha Freedom Party, mostly Zulus. Murders including “necklacing” of opponents (with burning tires wrapped around their necks) in the townships and mining hostels around Johannesburg were commonplace, fueled by longstanding ethnic and tribal resentments. Inkatha’s leader Mangasutho Buthelezi had not committed to the path of reconciliation and it was widely believed that a clandestine “third force” from the government was abetting and encouraging the violence by supporting Inkatha. (De Klerk denied knowledge of these activities.)

Afrikaaners were split between the mainstream National Party supporting de Klerk and the AWB (Afrikaner Weerstandsbeweging), a radical grouping of farmers in rural northwestern Transvaal, which urged violent resistance to any relinquishing of apartheid structures and legislation. So the reality and danger of further massive violence existed on several fronts. The white business community was also anxious, fearful of possible expropriation or retaliation against their properties as called for in the ANC Charter adopted in the 1950s but still official ANC policy.

1. Promoting reconciliation and avoiding civil war. Mandela constantly spoke of the need for reconciliation, and condemned township violence. He worked patiently to convince Buthelezi to have Inkatha participate in the 1994 elections, a step which Buthelezi took only days before the election. Mandela urged the ANC rank and file to avoid violence, and broke with the more radical members of COSATU. Winnie and he divorced and went their separate ways politically. Mandela took the lead role in the negotiations over the next three years setting the framework for the 1994 election, the drafting of a new constitution and the establishment of the Truth and Reconciliation Commission (TRC) chaired by Archbishop Desmond Tutu. In year-long public hearings carried on national television, the TRC gave South Africans the opportunity to hear openly about the brutal treatment of those who opposed the apartheid regime even though very few Afrikaaner leaders acknowledged their responsibility.

2. Promoting the rule of law. Mandela had been a lawyer in Johannesburg in the 1940s when the Group Areas Act and other race laws were introduced by the Afrikaaner government. There he met Arthur Chaskelson, George Bizos, and Jules Browdye who, 50 years later, were instrumental in drafting the new South African constitution. Bizos had defended Mandela at the Rivonia trial. Mandela attached great importance to enshrining the rule of law in the new constitution; not even the president was to be above the law. The new South African Constitutional Court, first chaired by Albie Sachs (who lost his arm in a terrorist attack against ANC cadres in Mozambique), has represented a major change from the Afrikaaner judiciary which in 1963 had sentenced Mandela to life imprisonment on Robben Island. South Africa today has a strong independent judiciary enshrining international human rights principles and values.

3. The ANC charter and the South African economy. Many in the ANC and COSATU favored a radical economic transformation and confrontation with the dominant business community which ran the mining industry and controlled most agriculture. In 1992, Mandela went to the informal Davos Summit of world economic leaders. Reportedly (as I heard the story) South Africa’s future was not even on the agenda. Discussion was all about the rise of China and the emerging Asian economic miracle. Mandela returned to Johannesburg and shortly thereafter the ANC revised its charter, dropping the provisions calling for the expropriation of white owned businesses and property. The charter had been adopted during the Cold War years of East-West confrontation, a time when many other newly independent African countries followed the Soviet economic model of nationalization and centralized state-run enterprises. Mandela met frequently with South Africa’s major business leaders, including the Anglo-American mining conglomerate and the major banks, assuring them that they would have a role in the future of South Africa and urging them not to divest their holdings or transfer their assets overseas. At the same time, a program of Black Economic Empowerment was initiated, allowing a small number of black South Africans to become part of the corporate elite.

Nelson Mandela stepped down as president at age 80 after one term in office (1994-1999) to be succeeded by Thabo Mbeki and Jacob Zuma. On a continent where many leaders cling to power for decades, this itself was a significant measure of his respect for South Africa’s new constitution. There was inevitably a long, unfinished agenda. In those five years, Mandela was unable to close the enormous economic-social divide between the prosperous and privileged white minority and a sliver of the black elite and the overwhelming majority of the population which has remained largely impoverished and whose economic circumstances have not improved significantly. The gap and disparity in access to housing, education and medical care remains profound. As a South African student said recently, 1994 marked a political transition, not an economic one.

Mandela also was unable to tackle the scourge of HIV-AIDs. But he spoke openly about it and campaigned for its victims, in contrast to his successor Thabo Mbeki who denied that it was a sexually transmitted disease, deprived people of anti-retroviral drugs, and led many South Africans to die ignominious lonely deaths. Recent critics have bemoaned that Mandela had not done more to improve the lives of the overwhelming majority of the population. Tragically, the decades of apartheid created a social and economic reality which will take a long time to overcome. Even with the best of policies, this is almost inevitably a multi-decade challenge.

In my office at the International Peace Institute is a photo of Mandela and myself taken on my last day in office as consul general. I called on him at his ANC office where he graciously agreed to have one of his staff take this photo. It is one of my most cherished souvenirs. It was my privilege to be in South Africa as Mandela steered the country through these years of monumental and transformative change.

John Hirsch is a Senior Adviser at the International Peace Institute. A former US ambassador to Sierra Leone, he was a political adviser to the commander of UNITAF, General Robert Johnston, and deputy to President Bush’s Special Envoy, Ambassador Robert Oakley, from 1992-1993.