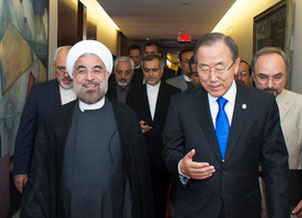 Most reporting on the nuclear agreement with Iran has tended to generalize about the types of sanctions and the impact of the deal on these various measures, so it would be easy to assume that United Nations sanctions are being eased or lifted, but this is not the case. The deal primarily eases unilateral sanctions by the United States and the European Union against Iran, leading to what is estimated to be around $7 billion in sanctions relief.

UN sanctions against Iran—found in resolutions 1737, 1747, 1803 and 1929—will only be assessed at the six-month mark, with an eventual goal (the so-called “comprehensive solution”) of lifting them within a year. In the near term, the only commitment with regard to UN sanctions is that no new nuclear-related UN Security Council sanctions be imposed.

This raises an important issue: how should UN sanctions be approached in the meantime?

Under Article 25 of the UN Charter, member states remain obligated to give effect to Security Council measures. The new deal with Iran has not altered the obligation to implement sanctions.  But on this front, work remains to be done. Gaps in the implementation of UN sanctions against Iran, which have been in place since 2006, are pervasive. Dual-use items, such as goods, software, and technology that may be used for both civilian and military purposes, have been a particular problem. Interpretation of resolution language and implementation of general terms in specific contexts have also led to implementation problems. Finally, because information on sanctions busters can involve classified information, states are very careful about what they share and with whom they share it.

EU officials have made clear that they, too, will continue to strictly implement sanctions not affected by the deal. This strategy was in question due to a series of challenges to UN and EU targeted sanctions. Criteria developed by the European Court of Justice in the Kadi case (regarding sanctions under resolution 1267) now require far greater detail for listings, and indicate that listed individuals and entities must have an opportunity to challenge those listings as a matter of human rights. These ideas are now beginning to  influence the design and expectations for other types of sanctions regimes. (For background on the July 2013 Kadi decision, see my post on Opinio Juris.)

In the past year, and due in large part to the Kadi decision, a growing list of EU sanctions against Iranian entities have been annulled on the basis that there was inadequate detail in the listings and that the lack of evidence affected the right to effective judicial protection. There was also some concern that the advances made by improving due process guarantees would compromise the ability of the EU to maintain sanctions against financial institutions and oil and gas companies. In an important appeal decision three weeks ago, however, the European Court of Justice’s 5th Chamber clarified its requirements, signaling that evidence is required to substantiate listings, resulting in the lifting of sanctions against one company but the upholding of sanctions against another. (See this blog for analysis of the Council of the European Union vs. Fulmen & Fereydoun Mahmoudian and Council of the European Union vs. Manufacturing Support & Procurement Kala Naft cases. )

Most believe that sanctions have had some impact on Iran’s willingness to appear at the negotiating table, but there are some notable dissenters. Hossein Mousavian, a research scholar at Princeton who formerly served as spokesman for Iran’s nuclear negotiators, argued in the Financial Times that “the idea that it is sanctions that have brought Tehran to the table is wrong. The real cause is the desire of new President Hassan Rouhani to reach a rapprochement with the US, the EU, its neighbors and other world powers, alongside the fact that the US red line has changed from ‘no enrichment of uranium’ to ‘no nuclear bomb.’” Dan Joyner at the Arms Control Law blog agrees with this statement, and points out that many of Iran’s negotiating points had actually been included in past agreements.

The real answer about the impact of sanctions—whether multilateral or unilateral—on the Iran deal will continue to be debated, but it is clear that until a comprehensive solution is reached, member states must continue to implement existing UN sanctions. Moreover, many are of the view that these same sanctions are necessary to maintain pressure and signal that a threat to peace and security remains.

As Enrico Carisch, a sanctions expert at Compliance and Capacity International (CCI), notes in an earlier Global Observatory piece, “Whichever sanctions drawdown options are implemented, the surviving sanctions must remain credible. Monitoring of compliance and the pursuit of potential violators requires equal if not more determination than has been the case so far.”

Kristen E. Boon is a Visiting Senior Advisor at the International Peace Institute. This article was cross-posted at Opinio Juris.