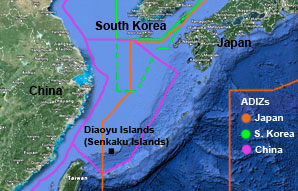 This map shows a detail of the Air Defense Identification Zones claimed by Japan, South Korea, and China (approximate).

Much has been made of China’s declaration of an Air Defense Identification Zone (ADIZ) over the East China Sea on November 23, as it adds another dimension to already complicated territorial disputes in the region. Although over 20 countries maintain ADIZs, China’s is problematic because this new zone overlaps with those of its neighbors, and because China is insisting that aircraft comply with its rules regardless of whether they intend to enter Chinese airspace—and this includes military aircraft.

Equally problematic has been the vagaries of the international response. After the US condemned the move and sent B-52 bombers through the zone to illustrate its position, government authorities instructed American civilian airlines to comply with the zone in the interest of safety. Japan and South Korea followed suit with military flights of their own, but Japan has ordered its civilian airlines to ignore the zone, raising the dangerous possibility that Chinese fighter jets may intercept and escort the hundreds of flights from Japan to China.

ADIZs are not governed by an international treaty or convention, and the risks of not having one are increasing. It is therefore incumbent on states that have declared ADIZs to begin discussions towards a set of standards that govern the act of declaring and the degree of authority exercised within an ADIZ. Otherwise, more states could begin to declare overlapping ADIZs, as South Korea did following the Chinese declaration, which complicated the protocols of interception, since both parties would claim the authority to escort the other. Also, the declarations of China and South Korea exacerbate ambiguities in international practice following the political decision by a country not to recognize another state’s authority in overlapping ADIZs.

And speculation is growing that China may declare other ADIZs, including the South China Sea. This, of course, would be decidedly more provocative than the East China Sea, since no South China Sea state currently maintains an ADIZ. However, the Chinese declaration may cause others to do so, creating a pretext for a Chinese response.

In the absence of a treaty or convention, state practice and government statements set the norms of conduct relating to the declaration and maintenance of ADIZs. States that maintain ADIZs must consider the international implications of the issue, rather than the narrow regional security implications. In this regard, the responses of the United States, Australia, South Korea, and Japan failed to do so. Instead, all four framed the issue as an unwelcome threat to regional security. This is unsurprising because China’s ADIZ touches directly on each country’s foreign policy interests. The latter two claim maritime features covered by China’s ADIZ and the former two retain an enduring interest in the stability of East Asia.

These were not the only countries to express concern. New Zealand, the European Union, and Canada all issued expressions of concern. These statements were predictably weak, as none are interested in alienating China, and all three are marginal security players in East Asia.

Nevertheless, the response by all of these countries missed an important opportunity to build a set of rules around ADIZs. Although diplomats from countries with ADIZs likely explained to their Chinese counterparts how China’s ADIZ differs from their own, this is insufficient. If they had framed their public response to China’s ADIZ as inconsistent with globally standard practice, it would have been consistent with their foreign policy traditions and would also have suggested a way forward that was less directly critical of China.

It’s not too late, however, for these countries to call on all states that maintain an ADIZ to meet to discuss the particulars of how they are to be governed. Indeed, there are already signs of such an effort. The United States’ Air Force Chief of Staff General Mark Welsh has called for an “international discussion” about improving communication in ADIZs, and Singaporean scholar Kishore Mahbubani has called on the United States to lead this initiative.

The International Civil Aviation Organization (ICAO) is the appropriate mechanism to pursue a dialogue. With 190 member states party to the Chicago Convention that established the ICAO, it is the place to begin discussions on appropriate conduct on the declaration and maintenance of ADIZs. ADIZs are not explicitly mentioned in the convention, but the ICAO has often interpreted its mandate widely to respond to issues such as social injustice that may go against the values enshrined in the convention’s preamble.

Japan has already asked the ICAO to examine China’s ADIZ in isolation. This is not a fruitful way forward because it is narrowly preoccupied with China. Only a mechanism created to establish universal protocols—ideally by a country not party to the recent imbroglio over East Asian ADIZs—is likely to elicit genuine participation by all countries involved.

Such an effort would go a long way toward stabilize the skies around the world; for example, Iranian-US interactions in Iran’s ADIZ are an overlooked source of tension. Likewise, it is only a matter of time before Chinese and Japanese aircraft intercept one another and each insist the other leave the overlapping area of their ADIZ.

More governance is not always better, but in the case of the ADIZs, the world has an opportunity to strengthen the rules around an issue that is of growing concern.

James Manicom is a Research Fellow at the Centre for International Governance Innovation and the author of Bridging Troubled Waters: China, Japan and Maritime Order in the East China Sea.