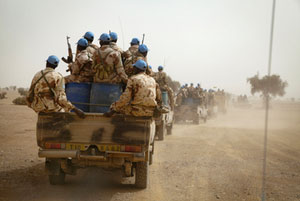 Peacekeeping is far less costly than war—the 2012-13 United Nations peacekeeping budget was less than half of one percent of the world military expenditure in 2010. Already with 15 peace operations around the world, UN peacekeeping continues to be in high demand. Yet, as economies struggle to fully recover from the global financial crisis, countries that pay more of the peacekeeping budget have let the UN Secretariat know that it will have to “do more with less,” meaning the number of missions and tasks for peacekeepers will increase, but without a commensurate increase in resources.

Comparatively little research has been done on key questions of peacekeeping finances, such as, how is peacekeeping funded? Which countries foot the bill, and how does that affect peacekeeping policy? And importantly, in a time of great demand for UN peacekeeping, are the peacekeepers currently being forced to “do more with less?”

While troop contributions to UN peacekeeping missions are purely voluntary, all member states must pay assessed contributions. UN peacekeeping is financed by a scale of assessments reviewed every three years. The peacekeeping scale of assessments is based on a complicated formula that takes into account the relative economic wealth of member states and roles in the UN Security Council, among other things. Discounts are provided to developing states, the costs of which are then absorbed by a surcharge on the five permanent members of the UN Security Council (P5). The P5 are required to pay this premium because of their “special responsibility for the maintenance of international peace and security.” The Security Council’s P5 are all among the top ten financial contributors.

States such as the US, Japan, and the UK are traditionally classified as “financial contributors” as they provide higher assessed contributions to the total UN peacekeeping budget (and not necessarily many troops). The assessment level for the United States, at 28.3626% in 2014, around $2.1 billion USD, is the highest. States such as Nigeria, India, and Pakistan are often classified as “troop contributors,” providing larger troop and police contributions to UN peacekeeping missions, are assessed at a lower assessment rate (some major troop contributors are assessed the minimum rate of 0.0001%).

UN negotiations on peacekeeping increasingly divide along “troop contributor” and “financial contributor” lines, and the two groups have very little overlap – in 2013, not one top 15 financial contributor is also a top 15 troop-and-police contributor. This particular dynamic is said to have had a polarizing effect on peacekeeping policy negotiations, as these two groups may have different interests. China (19th largest troop-contributor country) and Brazil (20th) may be the member states with some claim to both categories, as they also pay the 6th and 26th highest assessment rates, respectively.

Changes to the assessment levels occur every three years, with adjustments based in part on the relative sizes of a country’s Gross National Income. In recent years, unsurprisingly, countries with large economic growth have had their assessed contributions increase. The most dramatic example of this is China, whose assessed contributions have increased more than six-fold, from 0.978% of the peacekeeping budget in 1994 to 6.636% in 2013. Conversely, in 2012, the European Union’s assessed portion of contributions dropped to 36.8%. This most recent assessment is the lowest EU contribution portion since 2003, which also occurred following a recession there.

This graph shows the changes in assessment rates of the P5 since 1995: 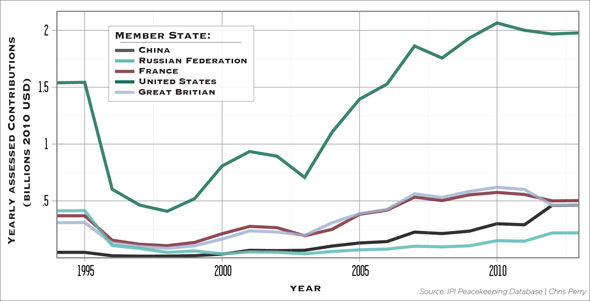 A more prolonged financial crisis affecting the West would presumably result in further reductions to the rates of “financial contributing” member states and a corresponding increase in other states’ assessments when the scale is revised in 2015.

Is the UN being asked to do more with less?

In addition to changes in the relative assessment rates, the financial crisis has resulted in a higher priority placed on effectiveness and efficiency of UN peacekeeping missions. Last month, the Under-Secretary-General for Peacekeeping Operations, Hervé Ladsous, observed that financial constraints require peace missions to be more versatile and creative in the implementation of their mandates from the Security Council. It is certainly true that the UN peacekeeping portfolio has been under rhetorical pressure to “do more with less,” but is this actually the case?

Measuring the resources given to UN peacekeeping is of course easy, whereas measuring how much the UN is asked to do can be quite hard. The UN has 15 peacekeeping missions in August 2013, whereas in August 2005 it had 17. However, the UN deploys 30,000 more troops and police than it did then.

One possible way to assess whether peacekeepers are being asked to do “more with less” therefore could be to look at the ratio of the peacekeeping budget to the uniformed personnel deployed each year. The change in this ratio (adjusted for inflation) is detailed in the graph below: 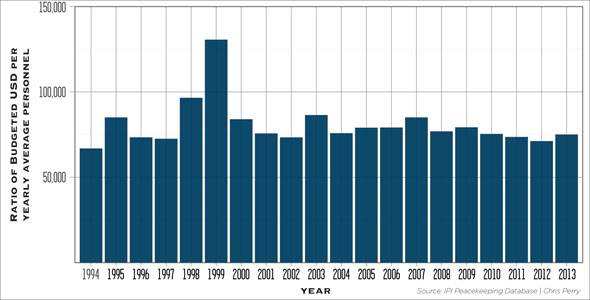 In 1999, this ratio reached its peak, when the UN was spending $124,650.80 USD per uniformed personnel in the field. Since then, there has been a general decrease in the dollars spent per troop until 2013. Since the UN did not change the pay of peacekeepers over that time (a “fixed cost”), the changes are related to the other elements of the missions (“variable costs”), where budgets have presumably been squeezed. Another element that could account for the reduction in these variable costs could be the initiatives undertaken by the UN in recent years to take advantage of economies of scale, such as the Global Field Support Strategy.

This year, the Providing for Peacekeeping project compiled a database of in-depth contribution data on UN peacekeeping operations and the assessed financial contributions of each member state to UN peacekeeping since 1994. Data-driven projects such as this, which make data publicly available, will hopefully assist researchers in answering some of these pressing questions.

Bianca Selway is a Research Assistant in the Peacekeeping program at the International Peace Institute.

About the photo: A military delegation from Bamako arrived in Tessalit, in northern Mali, for meetings with community leaders and commanders of the UN Multidimensional Integrated Stabilization Mission in Mali (MINUSMA). (UN Photo/Marco Dormino)