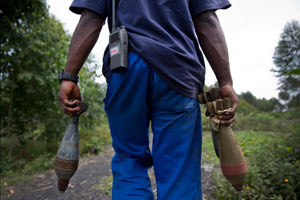 This week, almost a year after the March 23 movement (M23) briefly occupied Goma in eastern Democratic Republic of the Congo (DRC), a series of joint operations between the Congolese army and the UN peacekeeping mission’s intervention brigade finally led to a decisive victory over the rebel group. While this represents a military success for both the Congolese army (FARDC) and the UN peacekeeping mission’s (MONUSCO), it remains unclear if this can be seen as a turning point in the DRC’s conflict conundrum, as underlying issues remain unaddressed, such as the persistent threat posed by other militias, and the need for more thorough security sector reform (SSR) and credible disarmament, demobilization, and reintegration (DDR).

For about 18 months, the M23 rebel movement represented the strongest military threat to the central government in Kinshasa. Led by Sultani Makenga and the now-detained Bosco Ntaganda, the group dominated the government army units who acted at its bidding. This culminated in the rebels taking Goma on November 20, 2012, while the FARDC troops collapsed southwards. The UN was exposed to hefty critique that its peacekeeping mission did not prevent this, and in response, the UN Security Council set up a new resolution (S/RES/2098) that added an “intervention brigade” (FIB) intended to “neutralize [all] negative forces [i.e., armed groups]” to its existing peacekeeping mission.

Kinshasa reacted by streamlining its troops and command structures in North Kivu. François Olenga took over the helm of the Congolese land forces, replacing Gabriel Amisi, whose shady track record had been revealed by the UN Group of Experts. On the ground, Lucien Bahuma and Mamadou Ndala, two commanders more vigorous than their predecessors, took the lead of the FARDC’s counter against M23.

On the MONUSCO side, the senior leadership was also renewed, and German diplomat Martin Kobler became the mission’s Head and Special Representative of the Secretary-General (SRSG), replacing Roger Meece. Kobler was joined by Generals Carlos dos Santos Cruz as a new force commander and James Mwakibolwa leading the FIB.

Immediately, MONUSCO assumed a more assertive profile, first seen when the FIB engaged in actual combat operations in late August, helping the now-more-coherently-acting FARDC to dislodge M23 from areas close to Goma. The rebel movement itself had suffered considerable weakening a few months earlier, when disharmony between Makenga and Ntaganda provoked a scission followed by internecine skirmishes. Makenga emerged as a winner, but as Ntaganda’s wing fled to Rwanda, his movement lost around 500 combatants.

Since their formation, M23 continued fighting on and off, but diplomatic efforts to curb the M23 crisis never ceased. The International Conference on the Great Lakes Region (ICGLR) initiated the “Kampala talks” kicked off in December 2012, where the Congolese government engaged in Uganda-mediated negotiations with the M23’s political branch.  But, despite an unprecedented diplomatic commitment—including Mary Robinson, acting as Secretary-General Ban Ki-Moon’s special envoy to the region, flanked by US special envoy Russ Feingold, SRSG Kobler, as well as AU and EU envoys, Boubacar Diarra and Koen Vervaeke, respectively—the envoys had little success in helping the talks to succeed. Recalcitrance on both sides led to a series of suspensions and prevented an agreement throughout 2013.

But military action made the tide decisively turn. Profiting from support from MONUSCO’s intervention brigade, a reinvigorated Congolese army launched a successful offensive on Kiwanja, Rumangabo, and Rutshuru beginning October 26 before taking on the hills surrounding Bunagana and Cyanzu. On November 5, M23’s political branch declared its armed rebellion over and would lay down their arms. The remaining few hundred troops dispersed, with the bulk of them fleeing to Uganda and Rwanda, as others surrendered or went into hiding. As of late afternoon on November 7, the Ugandan government confirmed holding Sultani Makenga and other senior commanders in custody. Makenga’s fate remains unclear at this point.

Taking the long view, this is, first and foremost a (much needed) military victory for both FARDC and MONUSCO. Politically, President Kabila re-emerges strengthened vis-à-vis an upcoming government reshuffle and alleged attempts to alter the constitution allowing him a third mandate in the 2016 elections.

As for much needed institutional reforms–SSR in particular–as well as a new DDR program that addresses the root causes of armed mobilization in eastern Congo, not much has been achieved through the recent events. More so, the swift victory even camouflages upcoming risks in terms of increasing security voids if MONUSCO and/or FARDC are not able to stabilize the now “liberated” and other unstable areas, such as those controlled by the decentralized Raia Mutomboki militia.

With over 50 different armed groups—ranging from army-like rebel formations such as FDLR or ADF, to ragtag militias of a dozen fighters (and almost everything in between)—the stakes remain high. Regardless of which armed group enters the FIB’s sights next—candidates include FDLR, ADF, and Mayi Mayi Sheka—they may be much harder to tackle, as none of the remaining militias is likely to confront a superior force if the alternative is to hide in the protection of Kivu’s forest panoplies.

In conclusion, the currently fragile situation demands continuous international attention and an increased national and regional commitment to avoid past failures. In particular, land and identity issues, institutional reform, as well as political dialogue and reconciliation—not only top-down, but also bottom up—are vital to peacebuilding in eastern DRC.

Christoph Vogel is a PhD candidate at University of Zurich working on the Democratic Republic of the Congo. He writes at www.christophvogel.net and tweets at www.twitter.com/ethuin.

About the photo: A member of MONUSCO’s demining team clears unexploded weapons in and around Goma, September 12, 2013. (UN Photo/Sylvain Liechti)