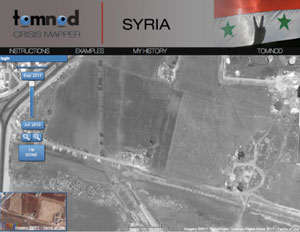 Any peace process is an exercise in the negotiation of big data. From centuries old communal hagiography to the reams of official texts, media coverage and social media updates, peace negotiations generate data.

Peacebuilding and peacekeeping today are informed by, and often respond and contribute to, big data. This is no easy task. As recently as a few years ago, before the term big data embraced the virtual on the web, what informed peace process design and implementation was in the physical domain—from contested borders and resources to background information in the form of text. The move from analog, face-to-face negotiations to online, asynchronous, web-mediated negotiations—which can still include real world meetings—has profound implications for how peace is strengthened in fragile democracies.

Firstly, the conduct of peace negotiations has changed from an art practiced by and involving a select few to broader social conversations, both in conflict-affected contexts and beyond, including among diaspora. Today we find that anyone with a mobile device can add their voice to issues they feel strongly about. When curated and suitably presented, the aggregate of this information (or specific comments and voices) can either progressively inform or destructively oppose official negotiations. Short of the most draconian blanket censorship, high-level stakeholders at peace negotiations have very little control over this Track Two social hubbub, through which vital ideas, concerns, and critiques can emerge.

Indeed, the very agenda of official negotiations can now be contested and debated in real time on the web. This can varyingly serve to strengthen official discussions and to undermine them, depending on the reception and debate around this citizen generated comment during the peace negotiation process. Finally, and most obviously, a lot of the information produced during peace negotiations—of any sort, whether official or society-wide—is not just turgid or highfalutin prose. It is produced for and resides in the Internet and web, where it is consumed, disseminated, edited, discussed, and archived. It is accessed in multiple languages through mobiles as commonly as personal computers. Rapid advances in machine translation are also going to have a deep impact in how information is produced and consumed. Services like Google Translate may increasingly shape perceptions and inform (or misinform) communications.

The traditional peace negotiator or peacekeeper can be forgiven for feeling helpless and confused. In August 2011, Fast Company ran a story on how the US Department of Defense will make otherwise hard-to-access data on war and conflict available to academics and help crowd-source military tactics. As contentious as this sounds, it is a trend that will grow. Although commonly associated with big business, “data philanthropy” by governments—the anonymization and sharing of even sensitive data for public use—will grow and bolster peacebuilding  by providing new insights into complex political emergencies, peace negotiations, and peace processes, including post-war statebuilding and reconciliation. The utility and impact of an initiative like the UN’s Global Pulse to strengthen peacebuilding is rich terrain to explore. It is similar to the approach used by the PAX Initiative, which “plans to launch a global digital system to give early warning of wars and genocide.”

Benetech is a nonprofit organization that has been contracted by the likes of Amnesty International and Human Rights Watch to address controversial geopolitical issues through data science. Several years ago, they were contracted to analyze a massive trove of secret files from Guatemala’s National Police that were discovered in an abandoned munitions depot. The documents, of which there were over 80 million, detailed state-sanctioned arrests and disappearances that occurred during the country’s decades-long civil conflict between 1960 and 1996. There had long been whispers of genocide against the country’s Mayan population during that period, but hard evidence had not previously emerged to verify these claims. Benetech’s scientists set up a random sample of the data to analyze its content for details on missing victims from the decades-long conflict. After exhaustive analysis, Benetech was able to come to the grim conclusion that genocide had in fact occurred in Guatemala. In the process, they were able to give closure to grieving relatives that had wondered about the fate of their loved ones for decades.

The potential benefits of massive datasets in peacebuilding also extend to image analysis of possible war crimes and crimes against humanity. Patrick Meier has written about how the members of the Standby Volunteer Task Force (SBTF) Satellite Team tagged the location of hundreds of Syrian tanks and other heavy military equipment on the Tomnod micro-tasking platform using very recent high-resolution satellite imagery provided by Digital Globe. The LRA Crisis Tracker, which follows the Lord’s Resistance Army in Uganda and the region, also uses a number of sources—from those on the ground to situation reports from the UN system and other actors—to present a temporal and geospatial representation of one of the world’s most brutal terrorist groups.

Seeing data presented in such a manner on the web usually compels a reaction, which most often is to find out more about the conflict and ways to help. It presents a complex scenario in a visually compelling form and weaves multiple datasets onto a single, interactive map or website that bears witness and strengthens advocacy in support of conflict transformation and constructive intervention.

Though big data is a big story today, the extent to which it is inextricably entwined in peacebuilding and peacekeeping is yet to be robustly explored. Without such sound study, it cannot be easily assumed that big data—its existence and consumption—always serves to strengthen peace. It may well be the case the big data can contribute more to destabilization in fragile democracies, especially those with low media literacy and entrenched propaganda channels. Those supporting violence will possibly champion big data as much as those interested in how this information can be packaged for peace. How to fully leverage this progressive, nonviolent potential of big data to save lives and build peace will be one of the defining, most important challenges in this century.

Sanjana Hattotuwa is a special advisor to ICT4Peace Foundation, a nonprofit based in Switzerland. A version of this article first appeared in Stability: International Journal of Security & Development.

About the photo: Members of the the Standby Volunteer Task Force Satellite Team tagging the location of hundreds of Syrian tanks and other heavy military equipment on the Tomnod micro-tasking platform, September 2011. (Tomnod/The Standby Task Force/Digital Globe)