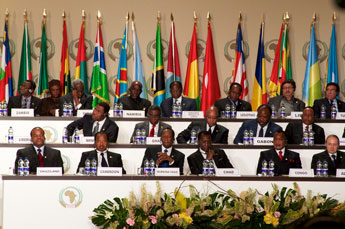 This week, African countries who support the International Criminal Court (ICC) have an opportunity to engage their fellow ICC parties on the issues raised over the past months which have led to escalating tensions between African leaders and the Court, as the 12th session of the Assembly of States Parties (ASP) to the Rome Statute (which led to the establishment of the ICC) is being held from November 20-28 in The Hague, Netherlands.

For years, the African Union (AU) has called on the United Nations Security Council to defer the investigation and prosecution against Sudanese President Omar al-Bashir, the first sitting head of state to be indicted by the ICC. These tensions have now crystallized around the trials of Kenyan President Uhuru Kenyatta and his deputy Vice President William Ruto, who are being prosecuted by the ICC for their alleged role in the 2007 post-election violence in Kenya, which caused the deaths of over a thousand people and forced the displacement of hundreds of thousands of others.

The AU has put its full weight behind the Kenyan leaders. However, following attempts to renege on the principle of non-immunity of senior officials for international crimes, and the recent rejection of an African-backed resolution to defer the trials of the Kenyan leaders initially for one year, the AU and its members supporting the ICC need to reflect and work towards a more constructive strategy for engaging the Court.

Since the indictment of Sudan’s president Omar al-Bashir for genocide and war crimes in Darfur in 2009, the AU began to publicly reprove the ICC and requested the UN Security Council to defer the proceedings initiated against the Sudanese leader, invoking the consequence of the indictment on the ongoing peace efforts in Darfur. With the election of Kenya’s President Uhuru Kenyatta and his deputy William Ruto in March 2013, African criticisms against the ICC intensified. They were formalized in the AU Assembly decision in May–opposed only by Botswana–asking the Court to refer its investigations and prosecutions against the Kenyan leaders to the national courts reformed after the 2010 constitution in line with the principle of complementarity, and tasking a regional body to reflect on the international criminal justice system and the impact/actions of the ICC in Africa.

After the summit, accusatory statements were made against the Court, including by Ethiopia’s Prime Minister Hailemariam Desalegn, the rotating president of the AU for 2013, and the Rome Statute came under threat of an impending mass withdrawal of its 34 African countries parties. A decision by Kenya’s Parliament in September to initiate a withdrawal from the ICC–which would not end the ongoing proceedings against President Kenyatta and Vice President Ruto–also contributed to increasing tensions, culminating in the extraordinary meeting of AU leaders in October in Addis Ababa, Ethiopia.

The extraordinary summit followed the violent terror attack on the Westgate shopping mall in Nairobi in September that killed 67 people, allowing the AU to underscore Kenya’s position as a frontline state in the fight against terrorism. Concerned that the proceedings initiated against the Kenyan president and his deputy would distract and prevent them from fulfilling their responsibilities, including with regard to national and regional security, African leaders assembled in the Ethiopian capital resolved to prevent the prosecution of serving African heads of state or government, or anybody acting or entitled to act in such capacity during their term of office, by any international court or tribunal. This decision reverses the principle of irrelevance of official capacity formulated by the Rome Statute, which clearly set aside the customary international law principle of immunity of senior government and elected officials. The decision also challenged the rejection of impunity contained in the AU Constitutive Act and was widely criticized by African and international human rights groups.

Also at the Addis Ababa summit, regional leaders decided to engage the UN Security Council on their concerns about the ICC, including requests for the deferral of the Kenyan and the Sudan cases on the basis of article 16 of the Rome Statute. The decision led to an interactive dialogue session in New York between Security Council members and an AU high-level contact group composed of foreign ministers of Ethiopia, Mauritania, Namibia, and Uganda and the deputy foreign minister of Burundi. Despite strong disagreement expressed by some Security Council members on the deferral issue, a draft resolution supported by Morocco, Rwanda, and Togo—the three African countries in the Council—was submitted to a vote in mid-November.

The rejection of the deferral request—with seven votes in favor of the deferral from China, Russia and five other non-signatories to the Rome Statute, and eight abstentions, including France, Great Britain, and the US—did not come as a surprise. The political nature of the Security Council, which has been criticized by supporters of an ICC free from any political interference, rightly has prevented it from interceding in the Court’s proceedings. However, the vote, which was incorrectly presented by African representatives as a vote in support or not of Africa, led to angry and disappointed statements by African countries sitting on the Council, as well as Kenya and the AU, raising more questions as to the strategy adopted by regional leaders to voice their concerns about the ICC.

The annual session of the ASP, where the AU has requested a special segment of the agenda to discuss the “indictment of sitting heads of state and government and its consequences on peace, stability, and reconciliation,” is the appropriate forum to address concerns about the ICC and discuss ways to strengthen the court system. In addition to the special segment, the issue of suspension of President Kenyatta’s and Vice President Ruto’s trials will be addressed during consideration of amendments proposed to the Court’s rules of procedure to incorporate new provisions on presence at trial (presented by Botswana, Jordan and Liechtenstein), including through communications technology (presented by Kenya and the United Kingdom). Kenya also proposed amendments to the Statute, which seek to grant immunity to sitting heads of state. Though these amendments were not submitted three months before the ASP meeting as required for their consideration, they were discussed at the meeting.

Besides raising their concerns about the ICC, some African countries attending the ASP session could use this forum to reiterate their commitment to the Court’s system. While the most vocal leaders in the region have been those lashing out at the ICC, a number of African heads of state have also declared their countries’ support for the Court. The Addis Ababa summit outcome was a negotiated compromise that fell short of calling for Africa’s mass withdrawal from the ICC. South African President Jacob Zuma indicated that there was no broad support for the mass walkout at the summit, and reaffirmed his country’s rejection of impunity. President Goodluck Jonathan also declared Nigeria, which is joining the UN Security Council for two years starting in January 2014, had no intention to pull out of the ICC and was instead ready to collaborate with other states parties to the Rome Statute to reform and strengthen the Court. Moreover, Ghana’s President John Dramani Mahama is reported to have declared in May 2013 that the Court had done “a fantastic job in bringing some people who have committed genocide and mass murder to justice.” Other countries, including Botswana, the Democratic Republic of the Congo, Senegal, and Sierra Leone have also presented themselves as supporters of the ICC. If these voices emerge more strongly at the ASP, this could change the continent’s course—and the AU’s position will need to reflect this.

Regional solidarities and a united African front are important in advancing the continent’s interests and agenda at home and abroad. But the AU and African leaders also have a responsibility to avoid Africa’s marginalization on the international stage and to prevent impunity for political considerations. The ICC is not the only mechanism for advancing justice and dignity for the victims of human rights abuses still too common on the continent. Nevertheless, it is an important tool for paving the way to a lasting peace—and the sustainable development that follows—regardless of the politics of the day.