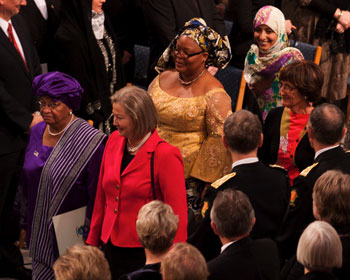 The UN Security Council marked its annual open debate on women, peace and security this month by unanimously adopting a resolution on women’s agency and leadership in conflict prevention and resolution.

Resolution 2122 is the Council’s sixth women, peace and security resolution in six years, yet it is the first since the adoption of resolution 1325 (2000) to substantively address women’s participation in peacemaking. (The previous five centered on the protection aspects of 1325, focusing on sexual violence in conflict.)

While this represents continued progress at UN headquarters across the women, peace and security agenda, the real test will be implementation, and whether the roadmap set by resolution 2122 is followed—particularly between now and the 2015 high-level review of progress on resolution 1325 worldwide.

The UN Security Council recognized the importance of increasing women’s participation in resolving conflict and building peace in its landmark resolution 1325 on women, peace and security, passed in October 2000. The Council urged the secretary-general to appoint more women to senior UN peace-related positions and called on all actors to involve women in decisions when it comes to making peace.

Thirteen years later, in his statement to the Security Council on October 18, 2013, Secretary-General Ban Ki-moon said that he has sought to lead by example in appointing more women to senior positions throughout the UN. Indeed, “for the first time in history, five UN peacekeeping operations are led by women–in South Sudan, Liberia, Cyprus, Haiti, and Côte d’Ivoire.”

But women’s appointments as peace negotiators and conflict mediators have progressed at a slower pace. A study by UN Women of thirty-one major peace processes between 1992 and 2011 found that just 2.4 percent of chief mediators were women. Only slightly more women participated in peace processes as signatories (4 percent) or as part of negotiating delegations (9 percent).

As a recent report argued, this is not only a problem for the 1325 agenda and its advocates; it is a problem for all who seek durable peace, because “…the participation of women at the peace table improves the negotiation process, contributes to a more comprehensive peace agreement, and bolsters the prospect of sustainable peace.”

Still, the secretary-general cited progress in women’s peace leadership: Last year, Aïchatou Mindaoudou, the current SRSG for Côte d’Ivoire, served as Joint Chief Mediator in Darfur, and earlier this year, Mary Robinson became the UN’s first woman lead negotiator in a peace process in her role as Special Envoy to the Great Lakes region of Africa.

Resolution 2122 recognizes the value of women at all levels of peace processes, and “calls on all parties to peace talks to facilitate the equal and full participation of women at decision-making levels.” It places a duty on special envoys and SRSGs to include women as leaders and participants. “Mediators and their teams must encourage negotiating parties to invite women to the table and address women’s issues in ceasefires and peace accords. This is in the best interest of lasting peace,” said Phumzile Mlambo-Ngcuka, executive director of UN Women.

As resolution 2122 makes clear, inclusivity is not just for the sake of equality for women. Inclusive peace processes ensure stability for entire communities. According to Jacqueline O’Neil, director of the Institute for Inclusive Security, “We know from experience that women’s full and meaningful engagement strengthens the integrity of a process and the sustainability of its outcome. Ultimately, inclusion is simply smart policy.”

Resolution 2122 sets out to boost women’s participation in conflict resolution and peacemaking by leveraging resources and refining information. “It calls for funding for local civil society organizations, particularly women-led, which is really important. This was approached in resolution 1889 (2009), but this is the clearest call for financial support, which is so necessary,” Sarah Taylor, executive coordinator of the NGO Working Group on Women, Peace and Security, told The Global Observatory.

The resolution also calls for improved information for the Council on women in conflict zones. It requests that the secretary-general, special envoys, special representatives to UN missions, and the UN departments of peacekeeping and political affairs incorporate updates on women’s participation and women, peace and security matters in their regular reporting to the Council.

In 2015, a high-level review will measure global, regional, and national progress on implementing the aspirations of resolution 1325, fifteen years on. Resolution 2122 calls for a global study of implementation thus far, to prepare for the 2015 anniversary. As some advocates point out, resolution 2122 already takes into account progress to date on women’s participation and leadership, and calls for action before the high-level review. “In this resolution, we have an acknowledgment of what we’re expecting to be done by 2015. And that is important,” said Taylor.

Indeed, there is much work to be done before 2015. Women and men must champion equality together, from UN headquarters to national capitals and village councils. As Ambassador David Donoghue of Ireland reminded the Security Council, “real transformative progress will only be made possible when national political leaders in conflict-affected societies—almost all of them men at present—adopt the women, peace and security agenda as their own.”

Women’s peace leadership clearly matters—both in principle and in practice. The slow pace of progress thus far implies that parity in appointments and participation will not be achieved any time soon. If the measures prescribed by resolution 2122 are to be more than aspirational, they must be implemented more swiftly and broadly than the UN’s previous women, peace and security pledges.

About the photo: Ellen Johnson Sirleaf (in purple), Leymah Gbowee (in gold), and Tawakkul Karman (in head scarf) approach the stage to be awarded the Nobel Peace Prize, December 10, 2011.