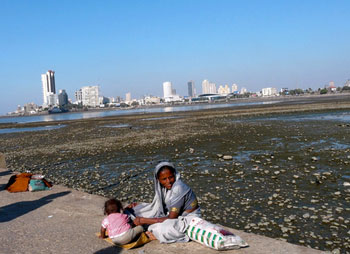 India’s pressing troubles include a faltering economy which is suffering from a “famine of investment,” said Arun Jaitley, leader of the opposition in India’s upper house of Parliament, adding that the succession of global financial crises that rocked many countries is not the root cause of India’s lack of economic growth and jobs.

Mr. Jaitley said middle-class Indians and those who aspire for middle class “constitute the conscience-keepers of the Indian society” and are looking for a better life. “They are in a hurry; they are becoming restless,” he said. “And therefore, unless governments deliver, the kind of popular protests we have seen in India will continue to exist.”

On India-Pakistan relations, he said, “terror and dialogue cannot coexist.” He said the difference between the approach of his party and the present government is that a composite dialogue would only go on “provided Pakistani soil is not allowed to be used for terror against India.”

“You cannot intimidate a country of India’s size into a dialogue,” he said, citing a number of attacks from across the border. “Therefore, if, in an environment of terror, dialogue is held, such a dialogue will be a photo opportunity; it will not be a meaningful dialogue.”

The interview was conducted by Hardeep Singh Puri, former UN ambassador from India and now a senior adviser at the International Peace Institute.

Hardeep Puri: We are privileged to have with us this morning, Mr. Arun Jaitley, leader of the opposition in the Rajya Sabha. He’s not only a very prominent leader of the Bhartiya Janta Party, but an extremely active leader in India’s political scene.

My first question is that you placed highest priority on restoring economic growth rates, and you said that it is imperative to take the economy back to the rates which existed when the NDA government was in power. How much is your task—if you form the next government—going to be circumscribed by the state of the global financial and economic system as it exists? And how much can the rectification come from domestic course correction?

Arun Jaitley: Global factors do impact and do impinge on what’s happening domestically, but in the case of India, the impact is much lesser than what it is in several other economies, the principal reason for this being that India has a huge amount of domestic demand and therefore domestic demand is here to stay irrespective of what the other global indicators are going to be.

Therefore, when you had the East Asian crisis, when you had the banking crisis in the United States, the impact on India was relatively minimal as far as these crises were concerned. Therefore, I do believe that the present state of affairs as far as the Indian economy is concerned is not impacted so much by international developments as by important domestic developments.

The important domestic developments are 1)  a policy paralysis for the last five to seven years, where important reforms in India have not taken place, and some of them have been blocked because of a domestic environment which existed. Secondly, I think the whole confidence in the Indian economy seems to have gone down substantially, particularly after huge allegations of corruption which have been made. The current weakness of the Indian rupee is substantially attributed to a current account deficit, which is a fallout of the spiral effect of some of these corruption allegations that have been made—which have resulted in India having to import a lot of coal from the outside world, a lot of iron ore from the outside world. Otherwise, these commodities are surplus as far as India is concerned—the reserves are huge.

HP: So, I read you are saying, Mr. Jaitley, very clearly, that efforts by those who say that the current economic difficulties in India are due to global factors—that is problems existing on account of the financial crisis—that is exaggerated.

AJ: I’ll give you a few illustrations. 700,000 crores in terms of Indian rupees worth of projects were lying stalled because one ministry or the other had stopped them. The prime minister lacked the authority to overrule those ministries.

HP: You said in your room presentation this morning that there is a new geography in India with a growing aspirational middle class, who are interested not just in economic growth, but also better governance. They are concerned about issues relating to corruption. Are you scared sometimes that these aspirations—which are now being articulated in such a forceful manner—that the system may not be able to meet those aspirations in their entirety and that we may end up with the kind of problems that countries like Brazil, Turkey—which are broadly similar to us—have? Because aspirations when they cross a threshold sometimes tend to become slightly unrealistic.

AJ: The middle class always is an aspirational class, but India has an additional aspirational class of those who are aspiring to get into the middle class. And therefore these are people who want to use opportunities which are inadequate for them, but are still aspiring to move up. Now, these two are hugely aspirational. Therefore, they constitute the conscience-keepers of the Indian society. They are in a hurry; they are becoming restless. And therefore, unless governments deliver, the kind of popular protests we have seen in India will continue to exist. The answer to this is good and clean governance.

HP: Can I take you very briefly into an area of management of our relations with our neighbors? You mentioned, Mr. Jaitley, that you will seek qualitatively improved relations with the immediate neighbors—equally that you will emphasize resolution of differences through dialogue, but that can only happen if the proper environment [is created]: that is, an environment free of tension along the line of actual control; an environment which does not have terror thrown in as an instrument which we have to deal with on an across-the-board basis. Would you like to comment on that, and maybe annotate what you said earlier today?

AJ: The difference between the approach of the BJP and the present government is clearly spelled out from what was contained in the January 2004 communique, which Prime Minister Vajpayee had with President Musharraf—that a composite dialogue would go on provided Pakistani soil is not allowed to be used for terror against India. So, terror and dialogue cannot coexist. You cannot intimidate a country of India’s size into a dialogue. Therefore, if, in an environment of terror, dialogue is held, such a dialogue will be a photo opportunity; it will not be a meaningful dialogue.

The present government’s approach is best reflected in the Sharm el Sheik document, which is irrespective of the environment that exists between the two countries—the dialogue would go on. And therefore, when you had a huge amount of tension along the Line of Control—you had noncooperation on 2611, you had heads of Indian soldiers being chopped off, you had an attack from across the border—the prime minister still insisted on meeting his counterpart from Pakistan in New York, even though nothing would come out of such a dialogue. The dialogue became only a photo opportunity.

HP: Thank you very much. I want to thank you once again for this exchange, which will come on the Global Observatory, which chronicles developments on a daily basis.

And I would like to thank you, and also allude that I am particularly pleased, because this institute was actually founded by an eminent Indian who was also its president for 20 years. Thank you very much.