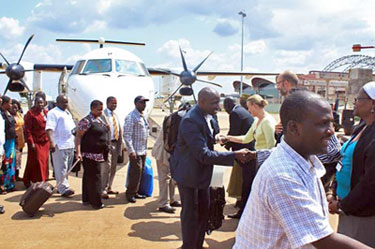 An ambitious example of South-South cooperation paired civil servants in South Sudan with civil service support officers from Ethiopia, Uganda, and Kenya, to rapidly build capacity in a country that is just forming, said Angeth Acol de Dut, the Undersecretary of Public Service and Human Resource Development in the Republic of South Sudan.

This initiative from the Intergovernmental Authority on Development (IGAD) has been going on for two years and “did help, to a large extent, address the noted lack of skills by on-the-job coaching and mentoring through the concept of ‘twinning’ between the civil service support offices and civil servants from South Sudan,” Ms. de Dut said in this interview.

“Twinning” refers to the concept in the IGAD initiative of pairing highly skilled civil service support officers—199 of them—with their counterparts in the South Sudan to rapidly develop core capacity through coaching and mentoring.

Ms. de Dut said security is a key challenge there, as it prevents support from reaching the rural areas, where the vast majority of the people live. “For me to be able to take development to them, I should be able to deploy the people with the capacity to assist in training. However, with insecurity, I cannot put them at risk there. And that to me is a challenge.”

Ms. de Dut said that this initiative was a step towards trying more innovative ways of doing things. “We don’t have to restrict ourselves to only tried systems, but try to explore innovative ways by which we can help build capacities—because situations are dynamic, and they’re very different from country to country, region to region.”

The interview was conducted by Andrea Ó Súilleabháin, Visiting Fellow at the International Peace Institute.

Andrea Ó Súilleabháin: I’m here today with Ms. Angeth Acol de Dut, the Undersecretary of Public Service and Human Resource Development in the Republic of South Sudan. She has been the anchor person for the IGAD, or Intergovernmental Authority on Development, initiative in South Sudan since it began two years ago.

The IGAD initiative has sent 199 civil service support officers to South Sudan where they are “twinned” with counterparts across ministries and sectors of government to rapidly develop core capacity through coaching and mentoring. This is the largest and most ambitious example of South-South cooperation on capacity development that uses peer-to-peer learning or twinning as its main approach.

Angeth, can you describe the capacity needs and gaps that led to the IGAD project in South Sudan?

Angeth Acol de Dut: South Sudan is a new country that has emerged from decades of war—so the setup of the government itself made it very clear that we do have a lot of capacity gaps in various sectors of the government. As a result of that, the IGAD initiative was conceived as part of the reform program to help address these capacity gets that were noted in the government. So, the bringing in of civil service support officers from the IGAD countries of Ethiopia, Uganda, and Kenya did help to a large extent address the noted lack of skills by on-the-job coaching and mentoring through the concept of twinning between the civil service support officers and civil servants from South Sudan.

AOS: What ministries and areas of government was it most common for these civil servants to work in?

AADD: We made it very open in the beginning because we had at our disposal 200 civil service support officers. We sent out a request to all the ministries of the government—by then we had 29 ministries—asking them to identify what kind of skills they needed. Based on the response that we got, we were able to deploy people in about ten to fifteen institutions. The vast majority were in the Ministry of Health, and then these were deployed across the whole country. Then my ministry benefited from them, as well as education and other sectors within the government.

AOS: With 200 civil servants in two-year placements, this is quite a major example of South-South and regional cooperation for civilian capacity development. So, from your experience, what are the benefits of this relatively new approach?

AADD: You know, when you look at it, there are lots of similarities between the countries involved. Aside from the fact that we are different countries—divided by imagined borders, in my opinion—we are very similar, which made the issue of cultural affinity become very prominent as an advantage to them being able to adapt and assimilate to situations in the countries.

We have also the situation whereby the civil service support officers came in with high skills and their civil service was formed in almost the same manner as the one in South Sudan. So, there were lots of similarities which enabled them to adapt to working.

And then when you look at the aspect of ownership, there was local ownership both from the receiving country as well as the countries contributing—whereby they felt that they are part and parcel of the development. So, they are helping their younger brother to come up and develop also.

AOS: With all those good results, what were some challenges that you faced in bringing regional, but still foreign civil servants into South Sudan?

AADD: One challenge was that there was not enough publicity about the project—so there was resentment initially from my own countrymen and women to the initiative because they looked upon these people as people coming to take their jobs. So, this was one major challenge. Then, later on, it was compounded by austerity. Because with the freeze on recruitment, we were not able to identify twins with the appropriate capacity with whom the civil service support officers could work. We had challenges also linked to issues of security, as well as linked to expense—Juba, for example, being too expensive for some of the civil service support officers. And then In addition to that we had issues linked to security in some instances.

The capacity issues are very vast, but because of insecurity, we were not able to deploy some of the civil service support officers up to the level of the county, where the needs are equally great. We could only do it up to the capital and the state capitals only. For me these are some of the key challenges that we noted. And then issues of language did materialize as another challenge because some of the civil service support officers had difficulty communicating with their twins, and that in a way hindered the implementation of the project.

AOS: You mentioned that this type of assistance is also needed on the local level in these partnerships. Do think that’s something that could be explored going forward?

AADD: When I say we are not able to send them to the county level, which is the lowest level of government, this is where the greatest majority of need is. When you look at our country, development is focused in the urban areas. However, the vast majority of our people are in rural areas where the needs are great. For me to be able to take development to them, I should be able to deploy the people with the capacity to assist in training. However, with insecurity, I cannot put them at risk there. And that to me is a challenge.

AOS: And you mentioned women, but can you tell me how you approached gender across this project, and did you take steps to include women on both sides of the twinned pairs—both civil servants from South Sudan, and also from the source countries?

AADD: As a government, we do have a gender mainstreaming policy. However, under the IGAD project, it came by default that a minimum of 30 percent were women, who had deployed either as twins or as civil service support officers. So, although we did not put it into the design of the project, it did happen by default. And we noted how positive it is towards streamlining issues to do with gender. And as we work towards phase two, we will definitely incorporate it as a requirement that it should meet a certain minimum number of women to be involved.

AOS: In addition to these successes for the program itself—I think 30 percent women in any country is a successful number for this type of initiative—can you share some of the concrete results of the project? What differences have you seen across South Sudan’s government ministries that had these pairs?

AADD: We’ve noted a lot of achievements as a result of the IGAD initiative. To mention a few, we’ve managed to develop a pension policy for a country that has never had one. And that is a major achievement. The same is true about some of the regulatory frameworks, which have come as a result of the initiatives taken by the civil service support officers. We’ve also noted improvements in how the day-to-day business is being conducted by civil servants, and a change in attitude among our civil servants toward their work. And these to me are the achievements of the project.

AADD: For me, I would say that so far, I’m satisfied with the approach that has been taken at the UN level to address our capacity issues. This is one step towards ensuring that we move forward and try more innovative ways of doing things. We don’t have to restrict ourselves to only tried systems, but try to explore innovative ways by which we can help build capacities—because situations are dynamic and they’re very different from country to country, region to region. So having this opportunity through the research to come and share our experience was something that I feel would open more doors not only for South Sudan, but other countries that are facing capacity issues.

AOS: Thank you, Angeth, for sharing your insights with us today.

AADD: Thank you. It was a pleasure.

About the photo: Senior civil servants seconded to South Sudan by IGAD arrive at the Juba International Airport. (© Gurtong)