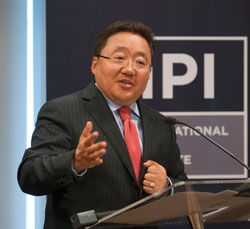 Mongolia’s peaceful revolution in 1990 ushered in 23 years of democracy, and President Tsakhiagiin Elbegdorj believes his country can both be a model country and learn from others as he seeks good relationships and partnerships with the rest of the world. “After twenty years of doing democracy, I see one truth,” he said in this interview with the Global Observatory. “Democracy is not a destination. Democracy is a way.”

Landlocked between two of the world’s biggest powers, China and Russia, he said Mongolia also prizes its “third neighbor,” which is what he calls other—even farflung—nations.

“We are really committed to rule of law, human rights, and market economy. And those are attracting more investments, more people to Mongolia, and we would like to see more investments from our third neighbor.”

Mongolia recently joined the Organization for Security and Cooperation in Europe (OSCE), and served as chair of the Community of Democracies. “If we become more relevant, and I think also independent, and the security of Mongolia is guaranteed. That’s my philosophy, and we are working for that.”

“I really believe that civil society is the soul of any nation,” he said. “Civil society is equal to democracy. If your people have that right, I think your nation benefits from that. People usually manage their life better than government manages people’s lives.” The Mongolian president recently joined US President Barack Obama in launching a civil society initiative in New York.

The son of a herdsman, the president expressed great joy at serving as the country’s freely elected president. “Working for your people, serving your nation by their free choice? That’s the greatest joy you can have.”

The interview was conducted by Warren Hoge, Senior Adviser for External Relations at the International Peace Institute.

Warren Hoge: We are pleased to have a very distinguished guest in the Global Observatory today, Tsakhiagiin Elbegdorj, the president of Mongolia. President Elbegdorj was sworn into office on July 10 for his second term as president of Mongolia. He was prime minister of the country twice, and he led the peaceful democratic revolution in 1990 that ended seven decades of communist rule in Mongolia.

Mr. President, you have helped transform Mongolia from a dictatorship to a democracy in a single generation. That’s quite an accomplishment. How did you do it?

I usually say that freedom is like a child; it never grows up, and you have to change the diapers every morning. And that’s what we are doing in Mongolia.

But in terms of the democracy, in terms of freedom, one thing is good—you can advance. I usually say that freedom, democracy, is a learning process. When you learn more, you can advance. You can make a little bit better decision. And with that, we can share our experiences. Of course, why we achieve that kind of result, I think, is thanks to our people’s support. And I really believe in the people’s power. And that power is, I think, the most amazing power that we have.

WH: Mr. President, Mongolia is a landlocked country with two very big and very powerful neighbors, Russia and China. How does this affect your trade and foreign policy? And can you tell us a bit about your third neighbor policy?

And I think we are really proud that with many of our third neighbors, we have great values connections. Of course, we don’t have land connection with them, but we have values connection. We are really committed to rule of law, human rights, and market economy. And those are attracting more investments, more people to Mongolia, and we would like to see more investments from our third neighbor. It may help us to balance our investments in Mongolia. It may help us to balance those economic interests. I usually say to our two neighbors, “You know when we have more investors from third neighbor, you, our two neighbors, Russia and China, will have more opportunity to invest, to work together. And that is my message usually. And, of course, our two neighbors respect our way of life, and also we have great cooperation with our neighbor countries.

WH: Mongolia has recently joined the Organization for Security and Cooperation in Europe, the OSCE, and chaired the Community of Democracies, for two years, I think. What other steps are you planning to project Mongolia’s profile in the international community?

TE: I think we were very happy to join Organization for Security and Cooperation in Europe, and also we were very happy to chair Community of Democracies, and those involvements, that cooperation actually raised our profile internationally. And we would like cooperate with international organizations very closely. Mongolia is open for those international organizations, also regional organizations. Now, we are talking about becoming a member of APEC, for example, Asia-Pacific Economic Cooperation organization, and our neighbors in APEC member countries are actually supporting us. And we need to raise our profile, and one thing is that we need to make Mongolia more connected, more relevant to international issues. If we become more relevant, and I think also independent, the security of Mongolia is guaranteed. That’s my philosophy, and we are working for that.

WH: In that same connection, can you describe the Civil Society Initiative, and I think I’m right in thinking that you discussed this with President Obama, Yes?

TE: Before coming to the UN, I received one invitation from the White House, and that invitation was from President Obama. And he asked me to join to supporting this civil society, and I was very happy, and I was the only president sitting together with President Obama launching that initiative in New York.

I really believe that civil society is the soul of any nation. Civil society is equal to democracy. If your people have that right, I think your nation benefits from that. People usually manage their life better than government manages people’s lives. And I believe in that. We need to give more access, more opportunities for civil society, and because of that, I joined that initiative, and I think our success in Mongolia also can be shared with others. I’m really happy to launch that initiative.

WH: Mr. President, Mongolia has one of the fastest growing economies in the world. But with so much potential wealth, particularly from extraction industries, and yet a limited population and capacity, what steps are you taking to avoid the so-called resource curse?

TE: First step we are taking is to reform our legal system, judicial system. I usually say that if we got a lot of money, and at the same time, if we have bad governance, both country and nation are in trouble. Because of that, you have to reform your government. You have to make your government ready for that kind of wealth. And because of that, I’m really focused during these years, reforming our judicial system. And I think the rule of law is the best thing democratic countries can offer to its people.

And the other thing, of course, is we are learning from others; how other mineral/resource-rich countries are channeling those money profits from their resources. One example is close to us, Norway. Norway has a wealth fund, pension fund system. And I think we are now studying all other funds around world, and now we are working on a draft of a law and system, and I hope it will come up with good solution to channel, to avoid a resource curse in Mongolia. The world is open to us through the Internet. Through technical means, we can learn from other experiences. How countries are failing, how countries are succeeding. And we would like to be one of the succeeding countries.

WH: At the same time, other countries can learn from you, it seems to me. And I wanted to ask you specifically about Korea, because you are a country with relations with both North and South Korea, and I know you have been to Pyongyang. Do the North Koreans view Mongolia as having some aspects that it might like to follow?

TE: I think we have very good relations with both Koreas, South Korea and North Korea. We have our embassies there, our old connections. For example, with North Korea, their leader Kim Il-sung visited Mongolia twice, and also we have connections through the government. We have a government commission between our two countries every year, once meeting in Pyongyang and Ulan Bator. And we would like to keep that channel open and we would like to give North Koreans more connection with the rest of the world. Also, of course, Mongolia is happy to share our experiences—how to transform our economy, and how people can benefit from that. And I think they are interested in expanding our two countries’ relations, and I hope you will hear more good news from this relation.

WH: So, the last question I want to ask you is sort of a personal question. How did it happen that the son of a nomadic herdsman, who was raised really in a Soviet system, Soviet education—you actually went to the USSR ‘s Army Academy—emerged as a person who not only talks about, but has produced democracy, judicial reform, a free press—all the trappings of open Western society? How did it happen that you became the person who realized that the system you were being raised in was not the system you wanted for yourself or for your country?

TE: When I think about this, I always think about my parents, my father and my mother. And I was born in a herdsman family and I have seven brothers. My family has eight boys, and I am the youngest.

And I think I got that education from my mother: Be good for other people, work for the others, serve others. If you share with others, if you work for others, in turn, you will benefit from that. That kind of teaching I actually heard from my parents. Imagine that: your father, mother, and also your seven brothers and yourself living together. And that was very close association. I think I’m really thankful for my parents.

Also, I’m really thankful for our great Mongolians, great generations who lived before us. I think they had a really good quality, and through genetics, I actually accepted those qualities. If I have something good as a human being, I think those are from my parents, those are from previous generations. And I was really happy learn that.

And one thing, also good—I think being herdsman boy, and now today as a president, freely elected by the people—this is really joy.  Working for your people, serving your nation by their free choice? That’s the greatest joy you can have. And thanks to the freedom, thanks to the democracy which we started in Mongolia, I am today president.

If we didn’t have today’s democracy, freedom in Mongolia, I would be a very different person in my country—if we kept that closed society, if we kept that communist society in Mongolia.  And I’m really thankful for my nation, for my people. And they support me and they share my idea, and I have to serve for the interest of people. If you think good things about other people, I think, your fortune will be also good. I believe in that.

WH: President Elbegdorj, thank you very much for talking to us in the Global Observatory.

TE: Thank you very much.