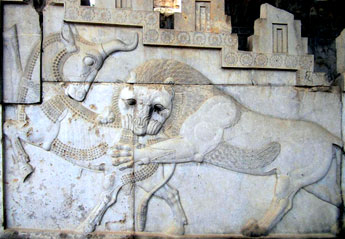 Opinions differ on the pivotal role of sanctions in opening the door to constructive engagement with Iran. Some, like Israel’s Prime Minister Benjamin Netanyahu in his recent speech to the United Nations General Assembly, believe Iran was able “to advance its nuclear weapons program behind a smoke screen of diplomatic engagement and very soothing rhetoric.” Other perhaps more clear-eyed observers interpret Iran’s opening gambit at the Geneva negotiations—a proposal to scale back its existing uranium-enrichment program and allow increased international monitoring—as strong evidence of the coercive—and containing—power of UN targeted sanctions, which have been in place since 2006.

Setting aside decades-long bilateral tensions that bred deep resentments, radicalism, and successive layers of US sanctions, the twin interventions of UN-sanctions and P5+1 diplomacy may serve as a model for future non-military responses to complex geopolitical predicaments. This potential success is now evident in the counterweights that have been put on Geneva’s bargaining table: against the reduction, if not elimination of sanctions, the lead-negotiator for the P5+1, Lady Catherine Ashton, demands the reduction, if not elimination, of Iran’s nuclear program.

Whether the scales will tip towards peace and stability or not will depend on how skillful incremental sanctions relief is bargained against nuclear disarmament. President Hassan Rouhani’s government must be motivated with palatable sanctions relief. At first glance, the menu of “doable” concessions is richer than anticipated. At the top of the list are any targets of UN financial sanctions that could become subject to evidentiary or procedural challenges in the EU High Court. On September 6, 2013, the court announced its decision to annul EU-sanctions against seven companies and an individual because of evidentiary and procedural concerns. The UN should take advantage of an easy opportunity to review and delist cases that might be successfully challenged in EU jurisdictions. Another area of potential sanctions relief could be the splitting off of targeted financial sanctions from the list of individuals under the UN travel ban. Allowing travel while maintaining financial restrictions carries symbolic, personal, and humanitarian benefits. More substantial relief could be granted eventually with the easing of current interpretations of financial and economic restrictions that include targeting exporters of Iranian oil.

Whichever sanctions drawdown options are implemented, the surviving sanctions must remain credible. Monitoring of compliance and the pursuit of potential violators requires equal if not more determination than has been the case so far. Maintaining a robust sanctions regime for as long as possible is important because judging from previous attempts in negotiated settlements, securing Iran’s commitment to reductions of its uranium enrichment, and number of centrifuges under international oversight is the political linchpin.

Diligent sanctions relief management will help to advance negotiations while containing hardliners. Sanctions relief will make it easier for President Rouhani to demonstrate “heroic flexibility,” as called for by Ayatollah Khamenei. Reducing sanctions targets to the most recalcitrant Iranian parties, on the other hand, will push Iran’s Army of the Guardians of the Islamic Revolution (Revolutionary Guard) to the fringes. At the same time, unworkable demands by belligerents in the US Congress and in Israel can also be effectively dampened with partial sanctions. The nine senators who are already lobbying President Barack Obama to demand in the P5+1 negotiations an “immediate suspension of all enrichment activity” could derail the diplomatic efforts.

If any measure could help to mitigate the stark political contrasts that divide US hardliners from their leaders, a well-timed sanctions policy has an excellent track record. It worked well in 2005 and 2006 when US saber-rattlers had already picked Tehran as their next military target after Baghdad. The Bush administration chose UN sanctions as the next best show of strength against Iran’s nuclear proliferation without sliding into another Iraq-style military imbroglio, and in December 2006, following UN resolution 1737, the call for armed intervention by the trigger-happy caucuses of US Congress simmered down.

The US’s move towards a UN-sanctions response combined with diplomatic pressure may be one of the most underrated achievements in the Iran conflict strategy. The effectiveness of UN sanctions included the legal foundation for robust unilateral and regional organizations’ interventions, all amplifying one other. Iran’s economy gradually slowed under an unprecedented embargo of nuclear and ballistic components and technologies, and an intricate web of financial and transportation restrictions. The accumulation of effects includes deep losses of oil revenues to the government’s treasury, isolation from the international banking system which has led the Rial, the Iranian currency, to lose two-thirds of its value against the US dollar, over 40 percent inflation, and forecasts of stagnating or declining mid-term economic growth. In some instances, sanctions were supported with off-the books measures, including cyber-attacks and other intelligence coups.  While skeptics may cast doubts on the effectiveness of five rounds of UN sanctions, two facts are unassailable: the effects of sanctions are far preferable to a hot war in the oil-rich Gulf region. And sanctions have played a major role in producing today’s bargaining chips.

Enrico Carisch is a partner at Compliance and Capacity International, L.L.C

About the photo: A bull being mauled by a lion on the 5th century BC Apadana staircase at Persepolis, Iran. (BeeFortyTwo/Flickr)