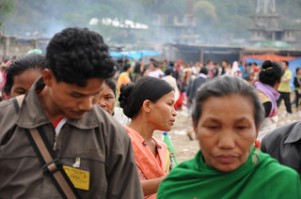 For 16 years there have been more than 30,000 people living across six refugee camps in Tripura, a state in the northeast region of India. Since fleeing from ethnic violence in neighboring Mizoram in 1997, the people of these Bru communities (also known as Reang) have sought to return, and on Monday, September 30th, a new effort began to do just that. Last week, the first 84 Bru families were transported to Mamith district.

Yet there still remains little progress towards a political or social settlement for the Bru people within Mizoram. Despite renewed rehabilitation packages offered to the displaced communities, there are still deep political and economic grievances that show little signs of being addressed. What remains is a situation vulnerable to prolonged instability: communities which perceive the treatment of ethnic groups as unjust; without means for peaceful recourse to their grievances; and a devolved, under-resourced and under-accountable security apparatus.

The responsibility to protect displaced people in India usually falls to the state level, yet conflict-effected groups rarely are able to access these rights. India’s National Human Rights Commission is expanding its reach and mandate to obligate state action for displaced people. However, without any oversight of security forces in conflict-afflicted areas, the agency remains powerless in Mamith district.


The killing of a federal ranger in 1997 by Bru separatists triggered an escalation in ethnic tensions which had been growing over a proposed Autonomous District Council (ADC) for the Bru people. There are three ethnic ADCs in Mizoram, each for the Lai, Chakma and Mara populations. The Bru are recognized as one of India’s Scheduled Tribes and, like these other ethnic groups, exist outside the “Mizo” identity. In addition, India granted the Bru the status of “Primitive Tribal Group,” which indicated a need for special development and protection measures; however, it was not backed up by the same autonomous structures that other groups had been granted.

Representing a population comparable to these other non-Mizo ethnic groups, Bru organizations began their campaign for an ADC, yet were met with fierce resistance from Mizo groups over its implications for reallocations of land and state resources. The ethnic conflict that unfolded involved the formation of a militant group called the Bru National Liberation Front (BNLF), and the displacement of around 45,000 Bru people.

After a campaign of low-level guerrilla warfare, including abductions and extortion, the BNLF began negotiations with Mizoram’s government in 2001 with the aims of establishing an ADC and guaranteed representation in the Mizoram Legislative Assembly. These proposals were again rejected by Mizoram; the BNLF then lowered their demands, seeking instead to establish a Regional Council to represent the Bru people, with fewer devolved powers. This has also yet to be granted by Mizoram and the BNLF remain armed and mobilized, despite a notional ceasefire.

The displaced communities in the refugee camps in Tripura claim they have been subject to inhumane treatment and conditions but continue to support their return to Mizoram upon conditions of political reforms. Mizoram offered displaced communities rehabilitation packages in 2009 and voting rights in state elections, and small groups began to return to Mamith district, across the border in Mizoram, where many were living before being displaced. However, many claimed the rehabilitation packages were unsubstantial, and without the necessary security, rationing, and financial assurances.

As the returnees were arriving, a Mizo youth was killed in the district, and the Mizo community accused a Bru armed group of the killing. This led to another series of ethnic clashes on November 9, 2009, including the burning of 500 Bru homes, the further displacement of 2,200 Bru to Tripura, and a minimal response by Mizoram. This first attempt at repatriation saw around 4,500 returned while as many as 37,000 Bru remained in Tripura.

In partnership with Tripura and the Government of India, Mizoram is now providing the Bru communities a new rehabilitation program. The package includes 85,000 rupees ($1,360) in cash to each of the families and food, transportation and housing subsides. A “New Land Use Project” has also been implemented in Mizoram, with claims that it will support the Bru’s livelihoods, through broadening access to land, loans, and insurance. An official description by India’s government however makes no mention of ethnic affirmative action, just that the project targets the “urban and rural poor.”

Without a clear road map for the Bru’s full rehabilitation process and meaningful political representation, a permanent and peaceful resolution to this situation remains near impossible. Given the lax security apparatus in the region, the return of the Bru to Mizoram may lead to an escalation of ethnic violence, unless a political solution to the marginalization and underrepresentation of the Bru is sought by Mizoram or the Indian government.

Jaimie Grant is an advocacy and communications consultant for human rights and development organizations in New York.

About  the photo: Reang people shopping in 2009, India. (flickr)