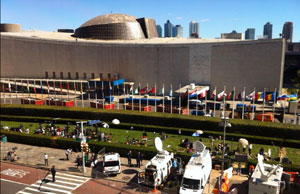 There is a sense of déjà vu on First Avenue in front of the UN Headquarters today. The road blocks, security checks, media vans, motorcades, and overcrowded streets remind us that time of the year has come: the annual opening session of the UN General Assembly. For the occasion, the 68th one in history, the UN secretary-general expects 131 presidents, prime ministers, and rulers to attend—one of the highest numbers in many years. It seems the UN has not fallen into irrelevance after all, and is still a central forum for global dialogue and decision making. Once again, reality has proven wrong all the Cassandras who periodically dismiss the actions of the world body.

Those who criticize this annual gathering as a “circus,” and suggest nothing will be lost if the meeting is skipped altogether, simply miss the point, for two main reasons. Without denying the emptiness of many rambling speeches and unfortunate displays of nonsensical rhetoric by certain heads of state, the General Assembly is a remarkable opportunity to take the pulse of global affairs. The speeches reflect the current mood and tone in international relations.

Second, all the fuss is not really about the fifteen-minute (or longer)  speeches that each country’s representative has on the stage of the General Assembly. It is about the opportunity for bilateral meetings. In fact, the dignitaries’ agendas are filled with important one-on-one meetings, which represent the very spine of every country’s foreign affairs. Some foreign ministers claim that this week in New York saves them a month of travel to capitals around the world (and the taxpayers’ money to go with it). Swedish Foreign Minister Carl Bildt tweeted last year, “If you sit in the Vienna Cafe in the UN North Lawn building for an hour or two, you meet most of the FMs that count in the world today.”

So, what is new this year? Beside the fact that the opening session will be held in a temporary facility, to the disappointments of many leaders who were counting on a souvenir photo on the famous marble stage of the world assembly, no over-the-top rhetoric will be in display. As the noisiest leaders are either out of power or deceased, and now that President Bashir’s visit seems to be uncertain, the opening session is going to be less flamboyant. For once, conciliatory tones and soft-spoken leaders will make the news. There will be far less walk-outs than seen in the past (US and other Western delegation used to exit the Assembly during the most provocative speeches).

All eyes, in fact, will be on the new Iranian leader Hassan Rouhani, who already announced he will use his visit “to present the true face of Iran and to pursue talks and cooperation with the West to end Iran’s nuclear dispute.” His new foreign minister, Javad Zarif, a former Iranian ambassador to the UN, has already been working the UN diplomatic body during the past week. In a lunch he hosted last Wednesday for over 100 diplomats, he reaffirmed his credo in multilateralism and Iran’s wiliness to engage with the world.

The Iranian initiative has grabbed everyone’s attention, and the world is willing to listen. The US leader was cautious in his speech, as he had to send messages both to the multilateral arena and to the more skeptical domestic constituencies. Iranian and American diplomats are working on a possible bilateral meeting between the two countries. Although the level of representation is still being worked out, this would be an historical event.

Syria is the other topic on everyone’s mind. Intense negotiations will seek to deliver a Security Council resolution to implement the Russian-US agreement on chemical weapons, while humanitarian concerns also call for carving out a political space to deliver humanitarian aid, putting pressure on all parties to respect the Geneva conventions and in particular the delivery of medical assistance, as well as the need to provide more support to the neighboring countries (Jordan, Lebanon, and Turkey) which are facing the devastating burden of over two million refugees (today, 20-25% of Lebanon’s total population are Syrian refugees!).

Although all this commotion won’t end the Syrian conflict, there is the hope that the Russian initiative will serve as the basis for a more constructive engagement with the Syrian government. A more conciliatory Iran is also essential to achieve progress on the Syrian crisis. So, for once, it seems that some stars are aligned, and this is a reason for cautious optimism. Only one year ago, the international community had nothing to work with in the Middle East. Today, the ongoing talks between Israelis and Palestinians and the Russian initiative on Syria give something to watch carefully. But, lack of trust and contrasting interests will make any deal extremely difficult.

While all bilateral efforts will focus on Syria, the multilateral meetings are on development issues: Disability & Development on September 23rd, Sustainable Development on the 24th, Achievement of the Millennium Development Goals on the 25th, International Migration & Development on October 3-4th. The high-level development meetings won’t produce any unprecedented decisions, in particular the one on the post-2015 development agenda, since two years are an eternity in diplomatic terms, and no country will take new positions. The goal of the meeting is indeed to agree on the next steps for deciding on the post-2015 agenda. Substance it seems is not even on the agenda. A multilateral high-level meeting on nuclear disarmament on the 26th will also hardly move the issue forward.

The release on Friday of the next report of the Intergovernmental Panel on Climate Change (IPCC) is also at risk of being a non-event. A draft of the final report has been leaked and reveals even more information on human responsibility for climate change. “There is high confidence that [human activity] has warmed the ocean, melted snow and ice, raised global mean sea level, and changed some climate extremes in the second half of the 20th century.” It is unfortunate, but the new report will likely not move the negotiations around an internationally binding climate change treaty forward.

Finally, today is also the opening day of the annual Treaty Event. Each September, states are asked to sign or ratify one of the numerous treaties that make up international law. This year, there is a special call for member states to ratify the Convention on the Rights of Child. Only three countries haven’t so far: Somalia, South Sudan, and the United States. Though the new Somalia government might fulfill its predecessor’s commitment to ratify in 2009, I’m not holding my breath.

Francesco Mancini is the Senior Director of Research at the International Peace Institute.

About the photo: View of media scrum in front of the UN General Assembly, September 23, 2013. (Credit: Francesco Mancini)