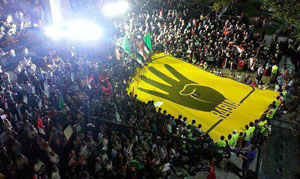 The curfew is a good indicator of the delicate situation that Egypt is going through at the moment. The most remarkable thing about it is the extent to which the population is respecting it, particularly when compared to the one that the Mubarak regime failed to impose during the uprising in Egypt in early 2011. And it is extraordinary for a city that was characterized by its nocturnal activity, whether it was families strolling by the side of the Nile, young men playing football, or people simply chatting away at a street side café until the small hours.

Though certain regions of the country devoted to tourism are less affected—such as the northwestern coast on the Mediterranean and the southern coast of the Sinai Peninsula—and it is impossible to impose it in the more popular neighborhoods of the capital, much of this vast country comes to a standstill everyday like clockwork. In central Cairo, where most official buildings are situated, movement stops completely everyday from eleven in the evening until six in the morning. This is in fact a significant relief from what was in place prior to August 31, when the curfew started at seven in the evening.

Hani, a taxi driver in his early thirties who for years preferred to work at night, has had his habitual timetable turned upside-down, but despite his frustration, he nevertheless appears to be happy to comply. This is because the curfew is a sort of informal referendum on the support for the measures imposed by the Egyptian Army, as well as a sense of incapacity to resist them by those that oppose it. In Hani’s mind, for example, there is no doubt that the Muslim Brotherhood has shown its true colors—in particular, its chauvinism—during the one year that its leader Mohammed Morsi held power, and he is more than happy to see him go.

For Hani, as well as many other Egyptians, the car bomb attack against the Minister of the Interior’s caravan in Cairo earlier this month is further validation that the army is fighting terrorism, violence which, according to him, the Muslim Brotherhood is evidently behind. This is indeed one of the main narratives that General Abdel Fattah Al-Sisi—who led the ousting of Morsi from power in early July and now holds the reins of power in the country—is propagating as a justification for the military intervention in the governance of Egypt and the steps taken thereafter.

Key to this narrative is the military operations taking place in the north of the Sinai Peninsula and next to the border with the Gaza Strip. In Sinai, where the army is said to be conducting major operations, movement is forbidden between towns after six in the afternoon, and within towns after eleven in the evening, just like in Cairo. Apache helicopter attacks in this area were front-page news in the official Egyptian newspaper Al-Ahram, and its headline on September 8 read, “The biggest military operation to purify Sinai from the sources of terrorism.” Solid information is hard to come by, but the consensus appears to be that, this time, the Egyptian Army is planning to get rid of the tunnels between Gaza and Egypt once and for all.

According to eyewitnesses, the army appears to be bulldozing the houses on the Egyptian side over the mouths of the tunnels that they led into, in order to widen the no-man’s-land between Egypt and the Gaza Strip. Apparently, most tunnels stretch between three hundred and five hundred meters (the longest are eight hundred), but it is difficult to prop up anything longer.

This is the same strategy that the Israeli Army used on the Palestinian side of the border during the second intifada, demolishing thousands of houses in the town of Rafah—a town which is itself split in two by the frontier—and so the local residents have experienced an unreasonable share of destruction. The twin suicide bombings that took place on September 11 on the Egyptian side in which nine soldiers were killed are evidence that the army faces real challenges. However, locals also pointed to the use of force by the army during an operation in which it had, on the whole, barely met with any resistance, and the bitterness that the destruction has caused as part of the motivation to attack the regular forces in return.

Signs of the military operations are evident throughout the Sinai, with checkpoints peppered across the length of the road linking Cairo to Rafah, armored personnel carriers driving alongside civilian cars on the highway, and soldiers positioned behind heavy machine guns, either on the turrets of tanks or in sandbag trenches by the side of the road. Further, for months now—predating the overthrow of Morsi—the Al-Qantara bridge, which connects mainland Egypt with Sinai, has been closed, forcing people to use barges to cross it and causing significant traffic disruption and anxiety among drivers in a hurry to reach a town before the intercity curfew enters into force. Checks are not particularly intrusive. Soldiers appear friendly when asking to see papers, and occasionally demand to inspect the trunk of the car. A young soldier dressed in full body armor fulfilling his year-long military duty near the Gaza border began questioning a foreign passenger due to the occasional exchange of fire in the area, but ended asking for friendship on Facebook.

Egypt is currently engulfed in a wave of jingoism, and many fear the army is accumulating excessive amounts of power and supressing the influence of what they consider to be the true revolutionary forces: the mostly secular, leftist youth who took over Tahrir square in early 2011. For example, though graffiti has become one of the distinguishing features of these revolutionary times, and a basic (and often sophisticated) form of communication on which many pride themselves, the authorities are clamping down on any drawing on walls that is critical of the army. Simultaneously, the stenciled profiles of the historical Egyptian nationalist leader, Jamal Abdel Nasr—whose fiery rhetoric has, over time turned him into an almost mythical figure—or graffiti in favor of the military leadership are popping up on walls all over the city. The intimidation affects supporters of Morsi and the Muslim Brotherhood in particular. And rhetoric against the United States, the Arab League and just about anything or anyone foreign is intense.

In parallel to Al-Sisi’s campaign, the Muslim Brotherhood and its sympathizers have created their own myths and narratives in which August 14th—the date the security forces broke up two encampments of Morsi supporters in Cairo killing hundreds—figures prominently. A whole iconography has been created out of these events. In particular, the name of Rabiat al-Adawiya—the square where one of the camps was based—has given birth to the main symbol of the movement: a palm with all fingers stretched out but the thumb, often reproduced in t-shirts and the Internet against a yellow background. Part of the power of this symbol lies in how easily it can be reproduced, especially by marchers and demonstrators, among others. Further, the notion of martyrdom and victimhood are deeply entrenched among Morsi supporters, shaping and unifying the group’s mentality.

The military takeover, however, did not put an end to the freedom of expression—even the freedom to criticize the authorities, something that the fall of Mubarak brought about in full force, though it existed to some extent prior to his ousting. In a recent trip from Cairo to Al-Arish, speaking to a crowd of passengers who mostly worked for the Ministry of the Interior, the driver, native of the town of the destination, was very vocal in his criticism of former heads of the police in the area, and accused the secret service of causing the deterioration of security in Sinai by recruiting the Bedouin population and becoming involved in the trafficking since the 1990s. That evening in Al-Arish, some two hundred Morsi adherents demonstrated through the center of town, many of them with the four-finger salute while walking behind a van that carried loudspeakers playing a song that called Al-Sisi a traitor.