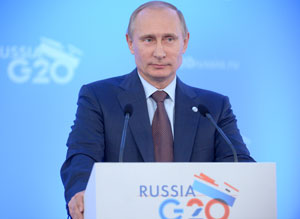 The mere threat of military action against Syria by the United States and others could move Syrian President Bashar al-Assad to the negotiating table, but it is contingent on what behind-the-scenes negotiations are going on, particularly with Russia, said George Lopez, Hesburgh Chair of Peace Studies at the University of Notre Dame.

“Have the United States and Russia agreed to a situation in which the Russians feel they publicly will condemn US action, will vote against it in the [UN Security] Council, but are using all new leverage they can muster against Assad to possibly bring him to a table?” said Mr. Lopez.

“Many of the findings of international relations research suggest that your strongest degree of compliance from a target is actually as the target anticipates something which is going to be quite painful,” he said.

But, Mr. Lopez said, it was limited strikes by NATO in Kosovo in 1999 that created political pressure and ultimately pushed the parties to negotiate.

Mr. Lopez said he would advocate for “a much more robust humanitarian and diplomatic strategy in this moment, in which we show the commitment of the West to protect civilians in new and direct ways, and also retain the ability of the threat, particularly if Obama doesn’t get a congressional vote on behalf of military action.”

He also argued that even if UN Security Council support for military action remains unlikely, more input from the Council could still make US-led strikes in response to Syria’s use of chemical weapons more legitimate: “If you could get a Security Council resolution that condemns the action of the Syrian government but then stops short of the call for military force… that would actually increase the legitimacy.”

However, given the evidence that al-Assad has moved possible military targets into civilian areas since the chemical weapon attack on August 21, Mr. Lopez worries that “military force looks better in planning than it may accomplish in fact.”

The interview was conducted by Marie O’Reilly, associate editor at the International Peace Institute.

Marie O’Reilly: I’m here with George Lopez, who holds the Hesburgh Chair of Peace Studies at the University of Notre Dame. George, thank you very much for speaking with the Global Observatory today.

George Lopez:  I’m delighted to be here. I’m a big fan of the Observatory.

MOR: George, we’re seeing a buildup to military action on Syria, in particular by the United States and some other Western powers. Without approval from the UN Security Council, the legality of US military action appears tenuous from an international perspective. But, what about its legitimacy?

GL: Well, I think that’s a wonderful distinction. Obviously without a full authorization for the use of force, you’re violating international law to engage in surgical bombing. Legitimacy has to do with the nature of the offense, which obviously is grievous in this case. The attack using chemical weapons violates all prohibitions in international law.

The style and direction of the vote of the Council might matter for the degree of legitimacy. If you could get a Security Council resolution that condemns the action of the Syrian government but stops short of the call for military force, or a second resolution is voted down for military force, that would actually increase the legitimacy, and it will be interesting to see what the P5 does with that.

But, the Obama administration is going to be on tough grounds here to make the case and to do it in a way in which you have a coalition of forces and countries that say, “we tried at the Security Council and couldn’t, but we also can’t let this kind of offense slide by.”

MOR: The Obama administration is making a hard sell on the benefits of military strikes on Syria. But what risks does military action by Western powers in Syria bear for civilians on the ground?

GL: Well, this is a difficult question because it’s a situation in very quick motion. Had the surgical strikes occurred, let’s say, early last week, or even a few days after the attacks—even without full evidence—you probably would’ve been able, from a military and tactical point of view, to inflict much more damage on the Syrians’ military capability to deliver these kinds of weapons again.

But it’s well known already that they’ve moved a good deal of these to, in some cases, civilian areas. The particular movement of the Air Force as well as the artillery on the ground makes it much more difficult to do this. Maybe not in terms of hitting command and control centers, but it raises all sorts of issues that military force looks better in planning than it may accomplish in fact, and because of the time dimension, I think this makes it very difficult.

This is why many of us have advocated for a diplomatic and humanitarian strategy to precede or go along with the notion of either the threat or the reality of military attack.

MOR: Could a credible threat of military strikes instead be used to facilitate some sort of compromise from the Syrian regime or its allies? Is there a political alternative with this threat?

GL: Well, it may not be an alternative, but it may be a very important moment. Many of the findings of international relations research suggest that your strongest degree of compliance from a target is actually as the target anticipates something which is going to be quite painful.

And the question would be, what kind of behind-the-scenes negotiation is going on? Have the United States and Russia agreed to a situation in which the Russians feel they publicly will condemn US action, will vote against it in the Council, but are using all new leverage they can muster against Assad to possibly bring him to a table?

I would advocate a much more robust humanitarian and diplomatic strategy in this moment, in which we show the commitment of the West to protect civilians in new and direct ways, and also retain the ability of the threat, particularly if Obama doesn’t get a congressional vote on behalf of military action.

GL: Well, even before the vote, I think we’re continuing to see the use of language and obviously a pretty astute use of the media, where the administration, particularly through the voice of Secretary Kerry, is saying, look, [this will be a] surgical action—limited, not an intervention—a punishment, and a calculated move to degrade capabilities to use these terrible weapons again; not trying to replace the regime; not even trying to change the equation of balance of forces between the rebels and the government. But that this is an action of singular type, and it’s something that international law and tradition demands.

Now, a number of people won’t buy that. Domestically, particularly some congresspeople are feeling that the minute you drop a bomb, you’ve intervened. And there’s good reason to think that.  But I think the administration will really try to segment this congressional debate within the Senate Foreign Relations Committee wanting to narrow this even further.  So if he gets a vote—which I think he may in his favor—it will be narrowly defined and may play very well to the president’s long-term desire, which is to not be very intervening in this conflict.

MOR: If strikes are carried out, what effect do you think that will have on the possibility of a political solution to the conflict in the future?

GL: Well, a lot depends on the limited nature of the strikes. If they’re much more limited than they are expansive, that still leaves [this option] open. You have not been able to diplomatically move this regime to the bargaining table and increasingly not the rebels.  We talk often in peace research of the “hurting stalemate.” This is far beyond that: This is a killing stalemate. I don’t see this kind of action opening up a political space necessarily.

But, I think a lot about the Kosovo example, where the NATO bombing was condemned immediately by the Russians, and they took a very strong stance against it. They didn’t want it authorized by the Council. But, after the fact, it’s very clear that they told Milošević, look, you’re in real trouble here. And there’s a limit to our own support for you. You better withdraw from Kosovo and you better get your act together.

It may very well be that, despite all the difficulties we’re having in dialogue publicly with the Russians, that the Russians will see a change of the equation on the ground and lean more heavily on Assad than they’ve been willing to do up until this point. That may create the opening.

GL: I wish it would be but it doesn’t look like that. In fact, we were in one of the great humanitarian crises of recent time before the evidence of the chemical attack. And one of the things that the chemical attack has done is set off a chain reaction of both natural dynamics in that region, but also in response to the threat of a Western strike. And it may very well be that we’re moving beyond the tipping point and ability of Jordan, Turkey, and others to cope with this. The international community ought to be as concerned about this humanitarian dimension as they are about military use of force, and I don’t think we’ve seen states, including Western states advocating military force, stepping up in that direction.

I don’t know whether it requires a humanitarian corridor or not, but I know it requires member states of the UN who have pledged support for humanitarian activities to actually deliver that. It demands an accountability for the countries that accepted refugees but capacity that they can meet their obligations and generosity. And it demands a new focus as part of the overall diplomacy in the Syria crisis.

MOR: George, thank you very much for sharing your insights with us today.