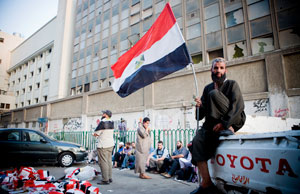 The crackdown on supporters of ousted president Mohammed Morsi on August 14 was a watershed moment in Egypt’s transition, yet the passing of its one-month anniversary might mark the passing of the window of opportunity for reviving Egypt’s fragile march towards democracy. The clamoring over the new Egyptian constitution is taking place amid a sustained crackdown on the Muslim Brotherhood and its supporters, near-daily security incidents targeting police and military officers, continued civil unrest, and increased aggression towards human rights and democracy activists—one cannot help but wonder if the promises of the January 25 uprising can ever be resuscitated. Unless the military-led government in Cairo changes its course in the very near term, Egyptians may find themselves waiting another generation before they get a second try at revolution.

In the euphoria of Hosni Mubarak’s ouster almost three years ago, revolutionaries would have never imagined the state of affairs in which they find themselves today. In early 2011, with Mubarak’s interior ministry goon squad reeling from an unprecedented defeat, they saw infinite possibilities for reshaping the new Egypt in their own image, unable to realize the difference between their vision and that of the state bureaucracy, the Islamists, and other vested interests. As those differences played out in a cliff-hanging political drama, a new dynamic emerged, reaching a crescendo on July 3, 2013 when thousands of protesters called for Morsi’s removal: that of polarization.

The roots of this drama lie in the governing strategy that Morsi—and the Muslim Brotherhood’s Guidance Bureau, by extension—employed during his truncated term. In the lead up to presidential elections in 2012, most Egyptians were willing to suspend their distrust of the shadowy group and put their faith in the power and momentum of the people’s uprising to constrain its ambitions and employ it to the demands of the January 25 aspirations. It did not take long to realize, however, that political considerations trumped any revolutionary demands for transformative change. Some could accept the way the Muslim Brotherhood played a deft game of deceit, shifting its alliances as it saw fit to position itself to rule, as part and parcel of politics in Egypt—or anywhere, for that matter. But as the economy continued to nosedive, and voices of dissent in critical media outlets were silenced, and it became apparent that Morsi was interested in co-opting rather than reforming state institutions, that momentum shifted against him and those he represented.

Morsi’s November 2012 constitutional decree introduced the poison that corrupted the spirit of the revolution. With the stroke of a pen, he declared himself the supreme ruler in Egypt. Despite his restraint, he reignited the fear of authoritarianism in Islamist form and sparked the war against him. The dominoes fell predictably enough: as the secular opposition went on the offensive, he relied on Islamists who maintained harder lines than the Muslim Brotherhood and rammed through a constitution that marginalized secular input. To maintain Islamist support, Morsi’s language against detractors grew harsher, and the conflation of faith and politics renewed sectarian tensions. As the distance between ideologies grew wider, his control over policy implementation grew weaker, increasing popular animosity that resulted in the Tamarod campaign—his eventual downfall.

Today, General Abdel Fatath al-Sisi has successfully appropriated the anti-Islamist sentiment to (in his mind) give Egypt a respite from the pains of democracy. Learning from the mistakes of the Supreme Council of the Armed Forces (SCAF), he backed a civilian government as the face of the new-new Egypt. Unfortunately, this facade seems to be the only lesson learned over the years. By manipulating popular discontent to crack down on pro-Morsi supporters, and jail or drive underground the Muslim Brotherhood leadership, the security apparatus employed its own form of majoritarianism to revive the Gamal Abdel Nasser/Anwar Sadat/Mubarak-era tradition of silencing and suppressing Islamists. Sisi has also successfully securitized the political landscape in Egypt. Riding on a poisoned revolutionary spirit, the Egyptian private media gleefully helped stoke the military’s message that portrays Islamists as terrorists. The assassination attempt on Minister of Interior Mohamed Ibrahim on September 5 illustrates the beginnings of the fallout from this repressive policy, a self-fulfilling prophecy as peaceful means for political expression are systematically shut down.

Many Egyptians actively support the military and police crackdown on the Muslim Brotherhood, justifying it as one part necessary evil to revive the revolution, one part revenge. Sadly, in their blinding hatred of those they perceive as having taken Egypt to the brink of civil war, these supporters vehemently deny the resurrection of the Mubarak state rising from the ashes of the revolution that brought all Egyptians together, if only for a moment. The mission creep resulting from the military campaign against terror is evident. Forget the talk of Sisi’s potential bid for president, or ex-candidate Ahmed Shafiq’s noble claim that he would step aside were Sisi to run for office. Set aside the marginalization of Islamists from the constitutional revisions, just as Morsi marginalized secular voices. Forget that the great liberal hope, Mohamed ElBaradei, moved back to Austria. Ignore the rebirth of the state of emergency, the attempts to criminalize peaceful protest, and the endemic corruption that remains unaddressed and permeates every layer of Egyptian society, particularly the security services. Instead, focus on the voices that once inspired freedom in Egypt, the journalists and activists who fought Mubarak’s riot police and torture chambers, who are now losing their jobs, getting arrested, and facing military trials for calling out false saviors of the revolution.

There may yet be time for a course correction, to change the tidal wave of discontent into a climate that reclaims political authority in the name of the people. The opening lies in the constitutional draft and the awareness that consensus is the only answer to bring a divided country together. The charter that determines the foundation for Egypt’s future cannot undergo the same flawed process that brought the democratic transition to a screeching halt. The Islamists are not going away, and without a voice in collective self-determination, they will voice their opinions through alternative and violent means. Additionally, the people—as the country’s highest authority—must demand the right to hold all political actors to account, especially security and military forces. The culture of impunity, underscored by the recent release of officers in Suez accused of killing protesters, has perpetuated a paternalistic impulse that must be broken for Egypt to progress.

Only the fifty-member constitutional committee can take this initiative, and at great personal risk. They must resist the strong hand of military control in the constitutional drafting process. They must place themselves in the shoes of those on the other side of the ideological fence and ask themselves if their choices will allow all voices to participate in shaping the future. Without a doubt, the draft will necessitate controls to avoid the mistakes of the past, but exclusion will only bring anger, anger will bring repression, repression will bring fear, and fear will only degrade the true aspirations of the original uprising. The fate of Egypt—the future of a people—is at stake. One hopes Egyptians are up to the task.

Tarek Radwan is the associate director for research at the Atlantic Council’s Rafik Hariri Center. Follow him on Twitter at @tradwan.

About the photo: A protester outside Tahrir Square, Cairo,  July 29, 2011. (Hossam el-Hamalawy/Flickr)