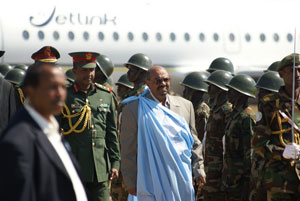 United States officials have confirmed that the president of Sudan, Omar al-Bashir, submitted a visa request to attend the United Nations General Assembly this week. In 2009 and 2010, the International Criminal Court issued warrants for his arrest, charging him with genocide, crimes against humanity, and war crimes. Since 2009, Bashir has openly flouted these warrants, traveling to countries that will have him.

Under the UN-US Headquarters Agreement, the US must grant him a visa to attend the 68th General Assembly. Last week, the Pre-Trial Chamber of the ICC invited the US to arrest him if he enters its territory, although the US is a non-party. Bashir is presumptively immune as a Representative to the UN, but the ICC statute waives head of state immunity under Article 27, and this would likely apply to a Security Council referral as well. However, it is very unlikely the United States would arrest Bashir on US soil. If he did attempt to come, it is more likely he would be arrested en route, or possibly after he lands but before he goes through US immigration.

Yet, a mechanism that could be quickly employed to prevent Bashir’s attempts to circumvent the ICC is a travel ban under the ongoing sanctions regime against the Sudan. Resolution 1591 (2005) imposed economic sanctions on Sudan, and established a travel ban and asset freeze that requires all states to prevent entry into or transit through their territories of listed individuals. At present, there are four individuals on the list, chosen for their direct responsibility for violations of international humanitarian, human rights law, and other atrocities.  Committee rules permit additions to the list.

The Panel of Experts of the Sudan sanctions committee has recommended that Bashir be added to the travel ban list several times. It is clear that the reason he has not been added is political. The Council referred the situation in Sudan to the ICC by Resolution 1593 (2005), nonetheless, some members of the same Council are blocking Bashir’s addition to the travel ban list.

If Bashir were added to the blacklist, all countries would be under an obligation to prevent his travel. Moreover, because the Security Council is acting under Chapter VII, the sanctions would trump other treaties, including the UN-US Headquarters Agreement, which is a bilateral treaty that establishes the rights and duties of the United Nations and the United States in relation to the headquarters site, including an access clause that enables representatives of member states to enter and exit the headquarters district. This hierarchy has been confirmed by recent European cases involving Al Qaida sanctions, including the June 2013 Kadi decision by the European Court of Justice.

The jurisdictions of the ICC and the Sudan Sanctions Committee are different. The ICC proceeds against individuals who are alleged to have committed the gravest international crimes.  In contrast, the Security Council applies sanctions when there are threats to peace and security.  Nonetheless, where a head of state has openly flouted an ICC warrant, and where he independently meets the criteria for inclusion on the travel ban and asset freeze list, the Security Council and the ICC should act together, as key organs of the international system, and demonstrate coherent policy.

Because the obligation to issue visas to attend UN meetings is near absolute, there have only been a few cases where officials have denied requests. In 1998, for example, the US refused a visa request by Yasser Arafat to attend meetings of the General Assembly on the basis that he posed a threat to US security. The General Assembly reacted by endorsing an opinion by the UN Legal Counsel that the failure to issue a visa was a violation of a legal obligation under the Headquarters Agreement.

Prior cases have not, however, dealt with individuals who are under outstanding arrest warrants. This is an important opportunity for the UN Security Council to back the ICC. The Sudan Sanctions Committee should expeditiously add Bashir to the sanctions list, which would place all states under an obligation to prevent his travel around the globe.

Kristen E. Boon is a Visiting Senior Advisor at the International Peace Institute. A version of this article first appeared in Opinio Juris.