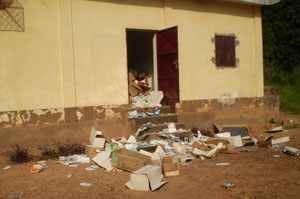 Over the last week, armed skirmishes around the small city of Bossangoa in the northwest of the Central African Republic (CAR) led to the death of up to 100 people and the destruction of a number of properties. While incidents like this have been recurrent since a loose coalition of armed groups called Séléka (“alliance” in Sango, the national language) seized the capital Bangui in March 2013, this episode should convince external observers and the international community that the slow normalization, once considered the most likely scenario, is not happening. Instead, a further deterioration in the country’s security is occurring, with a surge of highway banditry and predatory armed groups claiming different allegiances, and a narrative of an ongoing Christian-Muslim war that may have deleterious effects beyond the areas directly affected by fighting.

On September 25, a meeting of “CAR friends” is scheduled to take place alongside the UN General Assembly. Participants should announce stronger political and financial support to the new African Union force (MISCA) that is due to take over from the current Economic Community of Central African States mission, called MICOPAX, and police the whole country. Challenges demand more than a “business as usual” diplomatic initiative; they require a deeper assessment of the situation on the ground and of the regional stakeholders’ interests. The international response should focus on framing a more comprehensive strategy to deal with insecurity in CAR, a looming “religious” war, and the political vacuum created by the last years of François Bozizé’s rule, and the current, extremely weak government.

On September 6, more than 50 people, some of them armed, took over Benzambé, the home village of CAR’s former ruler François Bozizé and near the city of Bossangoa, and killed or made prisoner 20 Séléka fighters. Muslim households, essentially from the Peulh ethnic group, were targeted, and some were killed as revenge for the many abuses against the local Christian population by Séléka elements; robbery also seems to have been a motive for that brutal action. Over the next few days, armed skirmishes happened in other places near Bossangoa and gave some credibility to the emergence of an armed group made up of Bozizé’s supporters and former military.

At the time of this writing, there is no independent confirmation that those people who fought against the Séléka are organized in a genuine politico-military movement, though Bozizé’s entourage in Paris claims that they are. The weapons and tactics used for the ambushes do prove the presence of former soldiers among them. But there are other possible scenarios, such as self-defense youth groups convinced that Bozizé would soon go back to power and endorse their fighting (and plundering) against local Muslim communities.

There are at least three aspects of concern that can be pinpointed in this bloody episode. The first is the ongoing polarization between Christian and Muslim communities that could be devastating for the whole country and have consequences for the region, notably in Chad and Cameroon. Séléka fighters were recruited from Muslim communities settled in CAR or in the “three border areas” (Chad, Sudan, and CAR). Others also joined—mostly Sudanese elements settled in CAR or connected with the northern CAR shadow economy, Chadians, and others.

While Séléka fighters have notional inclinations for political Islam, they share a strong sense of communal identity and a will to avenge previous CAR regimes and their beneficiaries identified as Christians (not much of a discriminating factor, as the CAR population is more than 75% Christian). Lay Muslims in CAR today are less likely to be harassed by the Séléka, and most often, there is cooperation. The whole Muslim community is therefore perceived as supporting the Séléka and hostile to the core Christian population. CAR elites play a big role in articulating this narrative based on some limited truth and wide approximations to build a constituency against CAR’s current president, Michel Djotodia, and his armed supporters. The Muslim community also played a strategic role in the economy, and any attempt to disrupt it would negatively affect the urban economy at the risk of a violent reaction by the Chadian contingent of MICOPAX.

The geopolitics of the region is another aspect of concern. Chad is the great loser in the African Union (AU) MISCA initiative, and may not easily give up the military influence it has been enjoying for years and the privileged access to diamond fields in recent months. The actions of the AU suggest it is trying to protect Jacob Zuma’s reputation, whose business connections with Bozizé were hardly concealed by an anti-French/anti-imperialist discourse at the time of the crisis in the first months of this year. South Sudan, Uganda, and the Democratic Republic of the Congo on the Bozizé side, and Khartoum on the Michel Djotodia side, may try to take advantage of the current fragile arrangement for their own agendas, at the cost of the CAR population, which are brutalized by all armed groups, with little hope in an African military intervention that would likely repeat its past mistakes.

The current government is mostly dysfunctional since it was installed by the Libreville agreement signed in January 2013 and confirmed after the Séléka took over Bangui on March 24. The prime minister and his cabinet seem unable to address the many challenges of the situation; they are witnesses more than stakeholders at a time when the international community needs strong interlocutors in Bangui. Michel Djotodia, nowadays acting as president, has played different cards, but has shown that he has little control over his troops. The incidents last week in the Bossangoa region gave him an opportunity to make the Séléka presence a security priority throughout the country. By firing the Army chief of staff, a very decent officer, he sends a new message that should be taken seriously: war is again on the horizon. And this would provide an excuse for his behaviour in managing the state affairs.

The international community is in a difficult spot. The huge violations of human rights cannot be dismissed. Séléka is as heterogeneous as its opponents; some are willing to work toward normalization, while others are betting on a return to war. The CAR crisis looks like a security problem, but is much deeper than that: it requires a new national—political and social—arrangement; a restoration of the state apparatus all over the country; a development policy that targets areas or social strata that today are completely marginalized; and a regional accommodation that no one wants to speak of, as all have distinct ambitions. The question is whether the international players are willing to frankly address these issues on September 25.

Roland Marchal is a CNRS researcher based at CERI/Sciences Po, Paris.

About the photo: Possible signs of looting in Bangui, Central African Republic (CAR), following the seizure of the city by the Séléka rebel coalition. (P.A.S. Hopfan/Flickr)