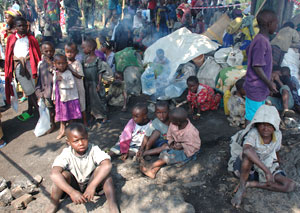 Next week, the UN General Assembly (UNGA) is expected to establish a two-year process to formulate a new post-2015 development agenda which will succeed the Millennium Development Goals (MDGs). There are four main questions on the table: what should the new goals look like, who will implement them, how can they be financed, and how will progress be measured?  In seeking an answer, we’ve found that making the concept of human security the centerpiece of this new global governance agenda could be the most powerful way to approach these questions.

Over the past six months, a number of substantive inputs have been released that will inform the UNGA deliberations on the post-2015 agenda. Of these, the report of the High-Level Panel (HLP) of Eminent Persons has attracted the most attention. The report calls for a fundamental shift in current development thinking that recognizes peace and good governance as core elements of sustainable development and wellbeing, “not optional extras,” thereby making-up for the lack of a goal on peace and security in the MDGs, and their silence on the devastating impact of conflict and violence on development.

From an analytical point of view, it is now widely accepted that violent conflict in the public domain is a major cause of underdevelopment, as demonstrated by the striking under-performance of low-income fragile or conflict-affected countries in meeting the MDGs. However, political obstacles to including language on peace and security in a new set of global governance goals can be anticipated as long as security continues to be approached solely from the point of view of state security. The reflex of governments at the UN will be to equate peace and security with sovereignty, which means that it will be treated as important but not something to be submitted to an international framework and the possibility of opening Pandora’s Box of additional accountabilities, monitoring by third parties, conditionalities, and other forms of interference in domestic affairs.

If peace and good governance are accepted as core elements of well-being, the way to include them in a new global governance framework is by perceiving security more broadly. This is where human security comes in.  Human security focuses on freedom from violence and personal security, rather than state security. Just as we know that violent conflict is a cause of underdevelopment, we know that violent conflicts are increasingly no longer caused by threats to territorial integrity. Security nowadays is defined rather by the questions of what is being threatened, the state or society, and by whom, state or non-state actors? With a few exceptions, and from a point of public interest, there is little security that can be left to the “domestic” sphere alone, if we take the drivers and the regulation of conflict into consideration, particularly those efforts to constrain conflict that do not resort to violence and are in line with universal goals. Human security embraces the central role of governments in this regard, as governments implement regulations and have the ability to apply a variety of context-specific approaches to violence, but it also accommodates a greater involvement of local communities, civil society, and other non-state actors as part of a sustainable solution.

The post-2015 development agenda is an invitation to think about a theory of change for the world that is more comprehensive and long-sighted. It will be one thing to agree upon a common set of goals, but what are our assumptions regarding who is expected to bring about these goals? The HLP report is calling for a “global partnership,” described as a “new spirit of solidarity, cooperation, and mutual accountability” that includes a broad range of actors and stakeholders such as governments, international organizations, civil society, the business community, academia, and private philanthropy.

Human security has great potential to mobilize the much needed active participation of different stakeholders in the prevention and reduction of violent conflict as a basis for development. With coercive power fundamentally defined in relation to the state in the foreseeable future, the issue is how to open up the thinking on security and the means to engage with multiple stakeholders so that state-led security provision, whether rooted at home or abroad, is more efficient and genuinely embedded in societies in an interactive way. This is an issue of legitimacy as much as it is an issue of operational effectiveness and sustainability. It also goes way beyond just civil-military relations to encompass multiple and diverse actors working together on long-lasting solutions to interdependent threats.

The problem with the post-2015 agenda is that it has to cut through the diffusion of global governance, which is a cacophony of different actors in asymmetrical power relationships, which tends to make greater global cooperation more difficult. A new global partnership is indeed necessary, but will demand a lot of work. Human security can be a much needed positive imperative for further developing the constituency, the agency, as well as new structures of governance within in a global sphere— all essential to achieving peace as a foundation for a new development agenda for everyone.

About the photo: Children in North Kivu, Democratic Republic of the Congo, September 2007. (Julien Harneis/Flickr).