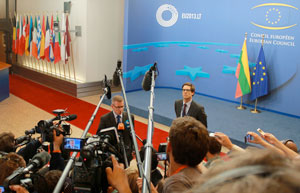 Diplomatic efforts to de-escalate the confrontation in Egypt have so far failed. The refusal of coup leader General Abdel Fattah el-Sisi, now the defense minister, to go along with diplomatic de-escalation, and the excessive force used by security agencies signal that the Egyptian army does not aim at repressing only the Muslim Brotherhood. They are trying to frighten the general population and restore autocratic rule to an Egypt that has tasted freedom and expressed itself repeatedly at the ballot box since 2011.

The US and Europe want to get Egypt back on a more orderly democratic path. This path entails restraining the Egyptian security forces, maintaining relative openness, and moving towards an inclusive polity with Islamist and, if possible, Muslim Brotherhood participation. It also means restoring a modicum of order and stability so that ordinary Egyptians can go about their business without fear of violence or intimidation.

Yet, the security forces are continuing their violent crackdown on the Muslim Brotherhood, which is pledging to continue its protests against the July 3 military takeover. Some Islamists are resisting with arms. About 1,000 people have been killed. What can the United States and the international community do to mitigate the situation?


The civilian government the Egyptian army installed after the coup has pledged an amended constitution by the end of the year, to be approved in a referendum and elections early next year. This is a fast timeline. What can the international community do to try to ensure it is met?

The United States has already postponed delivery of F16s to Egypt and canceled joint military exercises scheduled for the fall to protest General Sisi’s crackdown. Inevitably the question of America’s $1.5 billion in aid to Egypt will now arise in Washington. It would make sense to refocus the civilian assistance of about $250 million tightly on democratic objectives. Those most concerned with getting Egypt back on a democratic path are recommending suspension of the military portion ($1.2 billion).

This will be opposed by those more concerned with security issues, including maintenance of the peace treaty with Israel. A proposal in the US Senate to redirect all Egyptian aid to domestic American priorities was defeated last month by a wide margin (86-13), but that was before the worst of the crackdown. The margin would likely be much closer next month.

Even if the US Congress or the Administration acts to suspend military aid to Egypt, the financial impact will not be immediate. This year’s tranche has already been transferred. It will be the better part of another year before money can be blocked. More weapons scheduled for delivery can be delayed, but American industry will spend the year lobbying hard against a funding cut-off, as much of the money is actually spent on US contractors who supply the Egyptian military with materiel and services.

Europe provides much more assistance to Egypt than the United States. Its 5 billion euro (more than $6 billion) mainly economic package is now under review. This was intended to support the transition to democracy, which is now in doubt. Europeans concerned with their own economic problems may well see suspension of aid to Egypt as an opportunity. The international financial institutions are another important part of the picture. Egypt has been negotiating for many months a $4.8 billion loan from the International Monetary Fund. The US and Europe can block or delay that loan.

But both Europe and the United States need to consider the broader international context in deciding what to do about bilateral and IMF assistance. They are not the only players on the world stage. Saudi Arabia, the United Arab Emirates, and Kuwait have already pledged $12 billion, dwarfing both the American and European assistance packages. Russia will likely try to take advantage of any opening and provide military aid if the Americans suspend theirs.

Egypt clearly has alternatives to Western assistance, even if the Gulf states are notoriously slow and unreliable, and the Russians significantly less attractive to a military that has been getting advanced American weapons. If they want to see a democratic outcome in Egypt, the Americans and Europeans will need to convince the Gulf states—no paragons of democracy—to back the timeline for a return to democratic governance.

Widening the aperture farther, the Arab and Muslim worlds are watching what the international community does about Egypt. Will it insist on a return to a democratic path and an inclusive polity that allows Islamist participation on the timeline that Egypt itself has defined? Or will it settle for delay or a security solution that allows the army to remain the arbiter of Egypt’s fate? A lot depends on the skillful use of diplomatic and assistance leverage in a context where there are many players with diverse and even conflicting objectives.

Daniel Serwer is a professor of conflict management at the Johns Hopkins School of Advanced International Studies and a scholar at the Middle East Institute. He blogs at www.peacefare.net and tweets @DanielSerwer