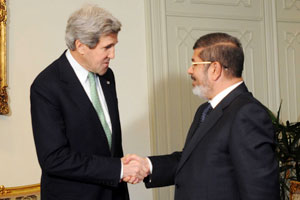 In March 2013, US Secretary of State John Kerry announced the disbursement of the first tranche of $450 million USD in budget support to Egypt. Three months later, President Mohammed Morsi was ousted over failure to fulfill the hopes of the Arab Spring. Amid the current turmoil and the police shooting of protesters in July, is it time to suspend aid to Egypt, or is it more constructive to stay the course?

Budget support has the potential to help recipient governments focus on what matters most in political transitions, strengthen their capacity to act, and support domestic accountability. But in practice, the messages about what budget supporters expect from recipient countries are sent more as muddled messages than structured dialogue, often leading to avoidable communication breakdowns.

Over $125 billion USD in aid is provided to developing countries every year, through either project aid or budget support. Budget support is aid channeled directly to a recipient government’s treasury, comingled with other funds, and uses the government’s processes for planning, budgeting, and spending.

Budget support represents USD3.9bn annually, or a small 3% of total aid, but requires a huge leap of faith on the part of donors. With this type of aid, donors have relinquished the right to trace where “their” dollars go exactly in the hope of becoming partners in a big-picture dialogue on the whats and hows of national policies; not on how many SUVs were procured and seminars organized, but rather on whether youths have jobs, fuel prices are stable, and government cares at all.

Budget supporters also hope to focus everyone’s attention on the recipient government’s obligation to report internally to its Parliament and citizens on development issues, rather than externally on donors, SUVs, and seminars. In countries undergoing political transitions, where needs are high, resources low, and society divided, promoting space for dialogue on what matters most is central for stability. What’s more, there is no evidence that budget support carries higher risks than other forms of aid (ICAI 2012 and Collier, n.d.), so placing emphasis on government accountability to citizens is not necessarily at the expense of donors (see, for example, Acemoglu and Robinson’s blog).

Additionally, using government processes for planning, budgeting, and spending is the best way to strengthen vital government functions. To ignore them is to undermine them, a point well described by Putzel and DiJohn.

But in practice, the recent events in Egypt and elsewhere beg the questions: what exactly are budget supporters trying to say, and is anyone listening?

On July 21, the US suspended its military aid to Rwanda, after a June 2013 United Nations report documenting Rwanda’s involvement in the Democratic Republic of the Congo’s rebellion du jour. This follows the suspension of UK, Dutch, German, and EU budget support to Rwanda for the same reason. However, the UK and Germany have since resumed aid. Hard to follow, maybe?

Such mixed messages need to be replaced by structured dialogue for budget support to realize its potential. Ten years of evaluations show that budget support to countries in political transitions suffers from insufficient political economy analysis and muddled political messages. IDD (2006) finds that, in many countries receiving budget support, “the political context has tended to be less well analyzed and adapted to than other elements of the context” —when it should be the starting point for any engagement aimed at systemic change. Hayman (2010) finds that in Ethiopia, Uganda, Nicaragua, Honduras, and Rwanda, “decisions have primarily been made on a unilateral basis, with limited recorded dialogue with the government,” thereby forfeiting the main privilege that budget support offers. Oxfam (2011) found that in Ethiopia, “the rules of the game are not yet clear in relation to what donors would do in case the political situation becomes ‘unacceptable.’” Further, “there does not seem to be an example of a country in which these rules have been fully clarified.”

If budget support cuts or increases are made for mainly technical reasons, without anticipation of their political consequences, and if there is poor coordination among donors, it is not surprising that stakeholders have trouble deciphering the signals that are being sent by budget supporters… or conveniently choose to ignore them.

While AfDB-World Bank (2012) and European Commission (2012) provide useful guidance, what seems to be paramount is to embrace the fact that budget support is an instrument of policy dialogue, and even political dialogue.

Development cooperation should not be solely defined by foreign policy imperatives: clinics need to remain open and children need to go to school, even under the most unsavory regimes. But donors have been blackmailed into continuing budget support, or else doctors and teachers will go unpaid. Donors need not be drawn into such games. If paying doctors and teachers is not a government priority in the first place, then maybe donors should provide direct project aid instead, at least until trust is restored and the dialogue resumes.

Budget support is only one among several possible instruments of development cooperation, and mixing modalities (multi-donor trust funds, project aid, budget support, and technical assistance) is the right answer to political transitions. This portfolio of modalities must be managed to both maximize efficient delivery and send clear signals to national counterparts.

It is in political transitions that coordination among donors, clear articulation of messages, and anticipation of potential impacts matter most. Recipient states should not be treated as unitary actors: in Egypt, in Rwanda and elsewhere, the constant negotiations among their constituent parts—the good, the bad and the voiceless—should be a central consideration for budget support to be effective as a vehicle for dialogue.

Juana de Catheu and Kathryn Nwajiaku-Dahou are partners at Development Results, a consultancy focused on innovative approaches to governance and growth in Africa.

About the photo: US Secretary of State John Kerry meets with then-Egyptian President Mohammed Morsi in Cairo, March 3, 2013. (US State Department)