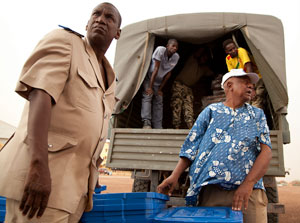 As voters prepare for a second round of voting in presidential elections on August 11, international attention is already focusing on the multiple challenges facing Mali and the international community in the months ahead. As was widely anticipated, former prime minister Ibrahim Boubacar Keita came in first in the July 28 first round with 39.2% of the vote, and in second place, former finance minister Soumaila Cisse.

Whichever one wins the August 11 runoff, the makeup of the new cabinet will not be radically different from its predecessors. This is both good and bad news. The next government will enjoy the formal legitimacy of an internationally validated national election, succeeding the post-February 2012 coup leaders and the transitional government. The reappearance of the traditional political elite with a new mandate also suggests, however, that some of the bad governance practices of the past will not have been completely eradicated. According to a poll published in February 2013, the majority of Malians pointed to “the incompetence of the political class” as the number one cause of the crisis. Many former government officials directly or indirectly have profited from drug smuggling networks, or maintained political viability by looking the other way.

The first challenge for the new government then will be to prove to its citizens, particularly the disadvantaged and disempowered tribal leadership and population in the north, that the government will truly attend to their most basic requirements. This means entering in coming weeks into the “national dialogue” with Tuareg and other northern representatives as set forth in the Ougadougou agreement of June 18, 2013 and endorsed in the mandate of MINUSMA, the new UN peacekeeping force, in Security Council Resolution 2100. The national dialogue alone will be very difficult, as the opening position of the northern representatives is for full autonomy for Azawad (as they call the northern half of Mali) whereas the government clearly wants to maintain a unified sovereign state. It will need a strong independent mediator to prevent the dialogue from deteriorating into an impasse.

The second challenge will be to craft, with the assistance of the United Nations, the African Union, and the European Union, a meaningful development strategy for the north. The donors conference in Brussels pledged 3.25 billion euros in development aid. The United States and other western states had pressed for the quick convening of national elections in order to be able to resume their development and aid programs. As with many other similar commitments, these internationally pledged funds will now have to be mobilized, and transformed into specific development projects. Unless these projects are forthcoming and developed in a transparent visible manner within the next year or so, further disillusionment is almost inevitable.

The third challenge will be mobilizing a sustainable security structure to prevent renewal of the radical Islamic insurgency of the north which in part precipitated the February 2012 coup. This in turn has several components. First will be standing up and deploying the estimated 12,000 MINUSMA contingents into southern Mali. These are mostly African troops from the preceding African Union force AFISMA. The recent decision of the Nigerian government to withdraw its 1,400 troops from MINUSMA in order to deal with the Boko Haram insurgency can only slow down deployment.

Second, MINUSMA is charged with “rebuilding the Malian security sector, especially the police and gendarmerie… developing and implementing programs for the disarmament, demobilization and reintegration (DDR) of former combatants and militias.” The recent experience of the UN in seeking to implement DDR programs in Cote d’Ivoire underscores the inherently difficult political issues involved. The retraining of the Malian army will also prove a political as well as a technical challenge. The army’s support is essential for a viable transition. Personal and political differences, as well as the army’s defeat at the hands of the radical Islamists, triggered the February 2012 coup in the first place.

In sum, the next Malian government and the international community face a new opportunity to begin to seek the tangible (not just verbal) re-unification of the fractured country, to initiate a few visible development projects, and to rebuild the Malian armed forces. It is also a tall order, given the history of Mali’s corrupt political class, MINUSMA’s level of preparedness and capacity, and the complexity of coordinating UN, AU, and EU security and development programs. The roles of France, with its 3,000 troops still in the north (this number will be further reduced to 2,000 in September and 1000 by the end of the year), and the United States, with its leverage in the Security Council and aid resources, will also remain key to the future.

John Hirsch is Senior Adviser to the Africa program at the International Peace Institute.