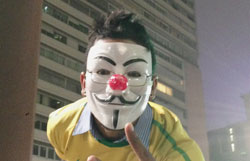 The mass demonstrations that convulsed Brazil in June and July 2013 are more than a raw display of people power; they confirm that we are living in a new era of digitally enhanced protest.

The storyline is by now well rehearsed. What started out as a modest protest by the little-known Movimento Passe Livre (Free Fare Movement)–a group calling for free public transport over the past decade–went viral. Only a few thousand members initially turned up in São Paulo to reject the equivalent of a $0.09 hike on bus fares and corrupt tendering processes for the issuance of transportation licenses.

When their protest was brutally put down by the military police, over a million people from more than 350 cities in Brazil and around the world took to the streets to march against all manner of grievances. The rapid spread of these demonstrations is the ultimate expression of open empowerment–the emboldening of millions of wired young people worldwide to press for change.

Brazilian protesters jubilantly rallied around a constellation of causes including systemic corruption, poor services, insecurity, and runaway spending on mega sporting events such as the 2014 World Cup and 2016 Olympics. Their voices were diverse and included left-wing and right-wing pundits as well as hacker outfits such as Anonymous and the more obscure anti-globalization outfit, Black Bloc. As the rallies grew in scope and scale, more extremist conservative voices emerged, calling for, among other things, the death penalty, impeachment of leftist politicians, and fewer taxes. While these latter groups were rebuffed, they are symptomatic of the widening of grievance claims in Brazilian society. In the process, innovative visualizations emerged that captured the spread of protests across Facebook, Twitter, Youtube and other social media platforms such as Tumblr, Instagram, and Whatsapp. These spontaneous efforts underline the transformative effects of technology in shaping Brazil’s digital revolution.

As in the case of mass protests in Bulgaria, Egypt, Tunisia, and Turkey, Brazil’s political establishment was caught utterly off guard. Predictably, they first dismissed the demonstrators as “vandals.” They quickly changed their tune after police were filmed deploying excessive force against protestors and journalists. In a bid to lower the temperature, Brazilian President Dilma Rousseff tried instead to initiate a dialogue with the protestors, and hastily unveiled a five-part reform plan. With uncharacteristic speed, Congress also overturned controversial legislation–known as PEC-37–that would have limited the ability to investigate corrupt officials. A number of the proposed reforms have stalled, but they are still very much on the public radar.

While the protests diminished somewhat in intensity after a few weeks, they left a lasting impression on public consciousness. They are also demonstrative of a wider protest meme that has swept the planet since the self-immolation of the Tunisian street vendor Mohammed Bouazizi in December 2010.

Brazil is one of the world’s most unequal societies, but the recent protests are not the preserve of the country’s rich or poor. They are instead an expression of disgust by the country’s rapidly expanding middle class. Marching alongside anti-establishment activists and extreme right nationalists were students, doctors, lawyers, teachers, and shopkeepers. They represent what sociologist Manuel Castells labels creative chaos, and the remarkable diversity of Brazilian society. Rather than being channeled through traditional political parties and unions, grievances were paraded on the real and virtual street. Local media outlets counted more than 490 protests over three weeks–an average of one protest an hour. The speed at which they spread, and the solidarity and political purpose they inspired, were unlike anything anyone had ever seen or imagined possible.

While it’s tempting to make the comparison, the Brazilian protests diverged in some respects from the Arab Spring or the demonstrations in Turkey. Indeed, Brazil features a stable and functional democracy. Notwithstanding recent declines in economic growth and increasing inflation, unemployment figures are at historic lows, and there were no obvious crises on the horizon. Even so, several features of the Brazil demonstrations echo protests underway in other emerging economies, and chief among them is the central role played by educated youth—particularly young women—in agitating for change.

Indeed, the early twenty-first century has given rise to a new sociological category: middle-class 20-somethings with limited horizons. These are young people with decent educations and bleak employment prospects. Many if not most of them are living in societies with major demographic youth bulges, coupled with a structural inability to absorb new entrants. And like so many other population groups, they do not feel adequately represented by their governments or legislatures. Their frustrations are compounded by public authorities who often respond by reaching for batons and tear gas instead of listening.

Yet, these young people also possess distinct advantages over their contemporaries from decades past. They are technologically savvy and navigate the virtual world with ease. In countries that are increasingly wired–some 40 percent of Brazilians are now online, forming the second largest national bloc of users of Facebook in the world–they are an especially powerful constituency. Digital natives are highly networked and unimpressed by conventional ideologies or top-down hierarchies. While operating in highly decentralized, dispersed, and fluid networks, they have a keen sense of their power, and how to use it to disrupt authority.

Not surprisingly, social networks are viewed with suspicion by the political establishment. Many governments are finding it increasingly difficult to create and control the public narrative in a world where information is available in real time, and on an unfathomable scale. In most cases, including in Brazil, they have resorted to new forms of social media surveillance and monitoring. And in most cases, these efforts have backfired.

Governments worldwide are clearly struggling to fully comprehend the implications of open empowerment. Their responses vary from seeking to improve the efficiency and effectiveness of e-governance through to adopting legislation and capabilities to police and securitize cyberspace. In Brazil, both ends of the continuum are in evidence. To her credit, President Rousseff was the first world leader to actively listen to the voice of the street. At the same time, hacktivist groups have revealed that the Brazilian intelligence agency, ABIN, introduced a new program called Mosaico to track social media.

Yet, as amply demonstrated in the case of Brazil, citizens are far ahead of states in settling the cyber-commons, including more nefarious criminal groups. Enterprising hackers, gangs, and cartels are using the net to advertise their wares, recruit members, intimidate their competitors, extort their victims, and even hire out contract killers.

Not surprisingly, a debate is emerging about ways to balance the opportunities afforded by open empowerment with questions of security and safety. Yet, despite the concerns of government authorities, the first genuinely online generation is in the process of rewiring the social contract that binds states and citizens. In many of Brazil’s cities, its members have successfully fused virtual and real protest, creating digitally-enabled popular awakenings. Young people have taken to the streets, are occupying public offices, and inspiring exciting forms of new journalism, including Ninja Midia. In the process, they are actively recalibrating the expectations of citizens and states and calling for quantitative and qualitative improvements in accountability and participation.

While still in its early stage, Brazil’s protests are an example of a massive and by-and-large peaceful movement that generated real results. Described by some as a middle class revolution, protesters extracted a rash of concessions from the government, with more to come. They have also put the government and opposition parties on notice.

Perhaps unintentionally, the protests severely wounded the president and her workers party, PT. Support for Rousseff has plummeted and popular dissatisfaction with all manner of services is at a record high. Although this may not necessarily play out as an electoral defeat in 2014 for the PT given the strong popularity of the party among beneficiaries of national social welfare programs, the writing is on the wall. Politicians everywhere should take note.

The question, then, is what happens next. There is little doubt that the protests have challenged the existing social order and alerted a new generation of youth to the unacceptability of the status quo. And many are threatening to continue demonstrating if their core concerns are not addressed, including tackling corruption within the ranks of Brasilia’s elites, the politicians, and oligarchic business owners. They will undoubtedly take to the streets in 2014 and 2016 if their demands are not met, a possibility that terrifies a government concerned about preserving its nascent reputation as a modern global power. Whatever the future holds, the newly empowered people of Brazil are a force to be reckoned with, and one that could well set alight comparable movements across Latin America.

This article draws on research conducted by openempowerment.org, a project of the SecDev Group and the Igarapé Institute. A version of this article was originally published in OpenCanada.org.

About the photo: A protestor in São Paulo wearing  a Guy Fawkes mask, which became a popular symbol of protest after it was used widely during Occupy and Anonymous demonstrations. (Rodrigo Vieira/Flickr)