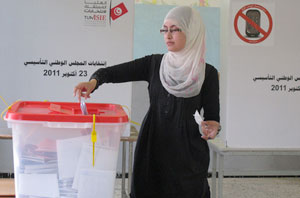 The new era of transition ushered in by the Arab Spring across the Middle East and North Africa (MENA) has brought opportunities for external actors to reset their foreign policies towards the countries of the region. However, Arab states accept aid reluctantly from the outside, as mistrust still abounds. Externally driven initiatives tend to be viewed as potential vehicles for influence or subterfuges for the de-Islamization and meddling in the Arab world.

Recognizing their perceived dubious track records, and aware that one of the keys to peaceful transitions is the authenticity and internal legitimacy of the new governments and state apparatuses, both the European Union and the United States have been expressing their desire to support locally driven initiatives.  The EU has notably promised “more for more”: more money, more mobility, and more economic access for more reforms. The idea in Brussels is to encourage “deep reforms” through resetting conditionality, while at the same time listening to local political actors and their ideas. The US also has increased the funds available to states in transition in the MENA region, opening an Office of the Special Coordinator for Middle East Transitions to coordinate new funding largely aimed at supporting democratic transitions by working with international and local stakeholders.

For the most part, EU and US assistance is likely to be focused on improving security sector governance and support for civil society. Given that police corruption, abuse, and over-sized security forces were among the factors that contributed to the Arab Spring, security sector reform is now paramount to the transition process. This, however, has not been an alien concept to the Arab world, as is often highlighted by civil society organizations and international organizations. External actors have a useful role to play in assisting transition countries with right-sizing (and often downsizing) security forces and rendering police forces more accountable and judiciaries more independent.

Yet, taking a cookie-cutter approach, or attempting to impose particular models on Arab transition states should be avoided. The EU, the US, and other outside actors must limit their assistance to specific requests made from within. So far, Libya and Tunisia have asked for assistance with improving security sector governance, though matters are complicated by the support from EU members to the previous regimes.

However, while Egypt has been keen to receive aid, it is weary of receiving it. In fact, some civil society organizations refuse to seek money from USAID. This situation has been further complicated by the ascent to power of the Muslim Brotherhood, the party of former President Mohamed Morsi. The ambiguous engagements by the US and some EU members towards his government, which resisted openly disapproving of Morsi’s policies, have inevitably caused disappointment and dissatisfaction among the large anti-Muslim Brotherhood sectors of society. With Morsi’s ousting, further uncertainty reigns as internal violence and casualties continue, making any foreign intervention less safe.

Current turmoil and stark divisions between supporters of the two camps show that political and nation-wide consensus is far from attained. The overall confusion, both with the political landscape and legal quagmires (under US law, foreign aid cannot be sent to governments formed in military coups) has rendered the ongoing phase of transition much more complicated. This has both regional and global repercussions.

Whether from the West or from Arab states, the effectiveness of support for transition processes will depend on how it is delivered. Successful support from external actors must be tailored to the specific circumstances of each state and target domestically driven processes. The greatest challenge for Western actors will be striking the right balance between the desire to support deep reforms on the one hand while encouraging locally driven initiatives on the other. Another challenge will be to sustain support for reforms over the long run. Generating the funds and mustering the political will to support long-term assistance, particularly in a period of economic crisis, will be no small feat.

The difficulties facing Western actors, especially in terms of legitimacy, only underscore and advance the importance of Arab states in transforming their own region. The Gulf States, which have kept a vivid interest and keen eye on the developments across MENA, have already pledged considerable funds. Saudi Arabia, the United Arab Emirates, Kuwait, and Qatar have been particularly generous. Indeed, the Gulf Cooperation Council states have a key role to play as engines of growth in a changing region.

Support for reforms coming from within the MENA region itself is all the more important given the need to develop endogenous, culturally appropriate norms, accommodated within globally acceptable paradigms of good governance, human rights and accountability. In my Sustainable History thesis, published in a previous work, I suggested that the sustainability of any political order is premised on the guarantee of individual and collective human dignity for all, at all times, and under all circumstances.

Human dignity means much more than just the absence of humiliation. It is a more comprehensive and holistic notion that includes a set of criteria that must be part of any governance paradigm. These are: reason, security, human rights, accountability, transparency, justice, opportunity, innovation, and inclusiveness. The Arab Spring has provided a valuable lesson for foreign governments: encouraging a policy of status quo for mere geopolitical considerations while ignoring despotic domestic practices is eventually unsustainable. For that reason, any engagement in the region must now be premised on policies and tools that would encourage and uphold human dignity, both individual and collective. Policies that focus on these needs are imperative and cannot be disregarded.

This is simply because a dignity-centered approach addresses fundamental human requirements and satisfies the attributes of human nature. In a previous work, I described these attributes as being: emotionality (the need for positive identity and recognition), amorality (our moral compass and consciousness are strongly dependent on social circumstances) and egoism (the quest for opportunity and the ability to reach one’s potential).

In order to stop the cycle of disenfranchisement, frustration, and discontent, dignity must be central, paving the way for a governance model that is affordable, acceptable, and applicable to various regional and cultural sensibilities. At the same time, this would allow endogenous and culturally appropriate forms of governance to develop, without providing a pretext for certain elites to refrain from real reform in the name of cultural relativism.

Actors within the region have a critical role to play in charting the way forward in what has been a truly critical turning point for the Arab world. This requires valuing the lessons of the revolutions and what they were predicated on: a quest for dignity for all citizens regardless of background, along with more accountable governments and public institutions. Similarly, Western engagement must avoid short-term geopolitical motivations. A more sustainable path would be for Western actors to help to the extent that they are asked to do so and focus on long-term interests that are mutual, equitable, and respectful for the sovereignty, cultural norms, and individual differences of these states.

Nayef Al-Rodhan  is a Senior Member of St. Antony’s College, University of Oxford, UK, and Senior Fellow and Director of the Centre for the Geopolitics of Globalisation and Transnational Security at the Geneva Centre for Security Policy, Geneva, Switzerland. Author of Sustainable History and the Dignity of Man: A Philosophy of History and Civilisational Triumph (Berlin: LIT, 2009) and editor of The Role of the Arab-Islamic World in the Rise of the West: Implications for Contemporary Trans-Cultural Relations (New York: Palgrave Macmillan, 2012).

About the photo: Voting day in Tunisia, October 23, 2011. (Noeman AlSayyad/Flickr)