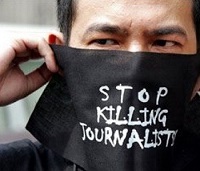 The demise of Bashar al-Assad seemed certain a few months ago; it appeared to be just a question of time. When this narrative changed suddenly last month, many policymakers were caught off guard. Despite all the information flowing out of Syria, the opposition’s foreign allies had an understanding of the war—and of the way out—that was “dangerously divorced from reality,” according to a recent report by the International Crisis Group.

One reason for this misunderstanding likely relates to the way the war is being reported to the outside world. As the UN Security Council prepares to debate the protection of journalists in conflict zones on Wednesday this week, the time is ripe to take a closer look at journalists’ roles in conflict contexts, and how their safety and levels of access can influence the conflict’s outcomes.

As the deadliest country in the world for journalists right now, Syria provides an illustrative example of both the dangers that media professionals face in conflict zones and the importance of their roles in painting an accurate picture of the realities of the conflict on the ground.

Last year was one of the most dangerous years on record for journalists worldwide, with at least 70 killed in the line of duty, according to the Committee to Protect Journalists. Twenty-eight journalists were killed in combat or targeted for murder by government and opposition forces in Syria alone.

While some members of the Security Council apparently do not believe this is a central protection issue, the Syrian conflict shows that it may be in member states’ own interest to promote the protection of journalists and call on all parties to grant them freedom of movement in conflict zones. As has happened in war zones elsewhere, UN monitors have consistently been prevented from doing their work in Syria, and not all UN member states have reliable intelligence gathering capabilities on the ground. So journalists have played a role in informing the public and policymakers’ understanding of the nature of the conflict, and obstacles to journalists’ access to Syria and heightened risks of attacks are having an impact beyond the tragedy of lives lost.

The Syrian civil war is taking place at a time of dramatic changes in the media landscape. There may be more information emerging from this war than any other in living memory. Even as journalists have largely been barred from the country, Syrians themselves have shared harrowing videos of massacres, bombs, and daily life in a war zone.

“I haven’t got a gun, I have a camera,” says one media activist inside Syria who goes by the name Trad in the documentary film The Revolution is Being Televised. “My camera is my weapon.… The camera is bringing the truth to the outside world.”

Yet, this unprecedented level of content from activists like Trad is mostly coming from the opposition side of the conflict, and it does not always translate into unbiased “truth.” As Trad’s colleague tells the camera in the same documentary, “The foreign media don’t trust us and they are right. I am an activist, only an activist. I am with the revolution, so I will only tell this side.”

Journalists are needed to make sense of the startling array of information now coming out of the conflict, verify what’s real and what’s not on the ground, and generate accurate accounts of what’s actually happening.

But as journalist fatalities rise in Syria and as dozens more are abducted and injured, the number of journalists entering Syria decreases and realities on the ground remain obfuscated. The few journalists who do make it in or who are Syrian themselves are often placed in particularly vulnerable positions as freelancers, who rarely have adequate training or support for their work in hostile environments.

While journalists rightly fear for their lives, the restrictive environments in which they operate can also influence the quality of their reporting, with knock-on effects for the outside world’s understanding of the conflict.

Since the Syrian government has refused access to most journalists, media professionals have been forced to rely on opposition factions to get them into the country and protect them while they’re there, arguably compromising their neutrality. The result, according to one journalist who recently returned from Syria, is a dramatic discrepancy between the situation on the ground and the way it is pictured in the outside world.

The UN Security Council is well placed to call for better protection of journalists in conflict zones, as it did in its 2006 resolution on the topic. One option for it now would be to call on conflict parties to allow greater media access and coverage as well as to better protect journalists. This language was adopted in a more recent UN Human Rights Council resolution.

Last year the Security Council itself implicitly took this step in the Syrian context when it endorsed the UN–Arab League special envoy’s six-point plan for Syria in 2012—the fifth point of which called on all parties to ensure freedom of movement throughout the country for journalists.

Proactively calling for greater access for media professionals in conflict zones, as the council judiciously does for humanitarian actors, could ultimately be in the council’s own interest: it could contribute to better informed solutions for international peace and security while also helping to save lives. Given the council’s lukewarm track record on this issue, however, an explicit statement to this effect appears unlikely in the short term.