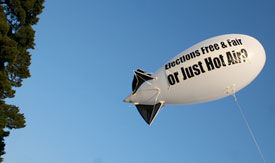 On July 31, voters in Zimbabwe will go to the polls for the ninth time since Robert Mugabe took power in 1980. The presidential, parliamentary, and local elections are expected to return Mugabe as president and the Zimbabwe African National Union–Patriotic Front (ZANU-PF) as the ruling party. It continues to be regarded as the party that liberated Zimbabwe, enjoying the fierce support of the military and police, and demanding allegiance from all Zimbabweans. And, despite a new constitution and ongoing Southern African Development Community (SADC) diplomacy for fair and democratic polls, the opposition appears set up to fail.

With 89-year-old Mugabe expected to continue his 33-year rule in failing health, he has resisted naming a successor. The question for Zimbabwe’s future, therefore, becomes not what the electoral outcome will be, but who will come after Mugabe.

“This election is a clincher for Mugabe.” That’s how one young member of the Zimbabwean diaspora, who wished to remain anonymous, described the situation in her country. She is not alone. Few expect a change in leadership to emerge from this election, and many in the diaspora think the process is only to present a façade of democracy while promoting the agenda of the ruling party, ZANU-PF.

The roots of the party’s support date back to the liberation of Zimbabwe. ZANU-PF’s credentials as “liberators” of Zimbabwe—cemented by decades of patronage and nepotism—have resulted in unswerving loyalty from the army and security forces to the extent that they are campaigning for the party and using intimidation tactics to neutralize opposition. The nine elections held since ZANU-PF came to power in 1980 have been used to reinforce the authority of the one-party state.

Now, after more than three decades in power, Mugabe’s authoritarian and discriminatory policies have shaped the electoral demographic of Zimbabwe. More than 4 million Zimbabweans live outside the country’s borders, driven out by hardline economic policies and aggressive security forces. They represent the former professional middle class, youth diaspora, and academic community, and in July this year the Constitutional Court ruled they are ineligible to vote in elections. As they also represent the critics of ZANU-PF, they have left behind those parts of the electorate more sympathetic to Mugabe or more vulnerable to intimidation by him and his supporters. In particular, the elderly are more likely to vote for the party, with the memories of liberation still ringing in their ears.

ZANU-PF’s positioning as the rightful party of leadership in Zimbabwe over the years has created difficulties for Zimbabwe’s opposition. In this election, ZANU-PF challengers include Morgan Tsvangirai’s Movement for Democratic Change (MDC-T), which has now formed a coalition with Mavambo Kusile Dawn (MKD) and ZANU-Ndonga, and an MDC splinter group that has allied itself with the Zimbabwe African Peoples Union. But a grand coalition that could unseat President Mugabe is failing to materialize. And while the opposition parties’ campaigns are hampered by ZANU-PF’s grip on power, the odds are also stacked against them because of the long history of neglect of voter rolls, now populated with ghost voters and fraudulent registrations.

Despite the new constitution signed into law this year, the Constitutional Court’s ruling that the election must take place before July 31 gave no time for the reforms to be adopted. Campaigning space is not equally divided in Zimbabwe, with the police often interpreting the Public Order and Security Act to disrupt opposition party meetings and rallies. The most coveted campaigning venues are kept for the government, and the state-controlled media provides ZANU-PF with air time denied to the opposition parties. Even if opposition parties are able to obtain permission to congregate, security force intimidation is such that voters are fearful of attending, so numbers are few.

In addition to these external factors, the parties challenging ZANU-PF have worsened their chances of success by making poor choices within their parties. Until now, the parties have been fragmented in their opposition to Mugabe. Their votes are split by residual tribal politics, and local decisions are still seen through an ethnic lens in many rural parts of the country.

Initially, the MDC-T’s emergence as a party that transcended these divisions presented hope for a focus on issues rather than ethnic politics, but the party has struggled to fulfill this promise. Revelations over Mr. Tsvangirai’s personal life have raised questions of his morality and suitability to lead the country, undermining political debate on policies and his legitimate concerns over the lack of constitutional reform.

The elections are to be monitored by the South African Development Community (SADC), and the international community has put its faith in quiet diplomacy and a regional approach to bringing electoral reform to Zimbabwe. To date, SADC’s impact has been mixed. As the principal architect of the Global Political Agreement (GPA), SADC has frequently attempted to encourage and cajole Mugabe to implement reforms, most recently requesting that the election date be postponed.

SADC has historically been limited by a membership of regional leaders with ties to Mugabe. When Zimbabwe achieved independence 14 years before South Africa and 10 years before Namibia, many of today’s regional leaders and their families were given refuge by Mugabe, and he played instrumental roles in their liberation movements. This debt of hospitality, combined with a cultural reverence for older statesmen, weakened challenges to Mugabe in SADC’s closed-door sessions that sought to nudge Zimbabwe towards reform.

Now, SADC’s leaders largely represent a new generation of Africans without the historic obligations of their predecessors, and many of them are driving reform and championing democracy. For leaders such as South African President Jacob Zuma, Botswana President Ian Khama, and Tanzanian President Jakaya Kikwete, Zimbabwe’s record is an embarrassing stain on the development of southern Africa.

President Mugabe has persistently avoided naming his successor, aware that the jostling for this prize bolsters his power and divides the next generation. But, at 89 years old, he appears to have suffered periods of ill health, which will be exacerbated by the demands of electoral campaigning. Many in Zimbabwe are now asking, not who will win the election, but who will take on the ZANU-PF mantel from President Mugabe.

There are rumors that a secret pact has been agreed between Mugabe and his defense minister Emmerson Mnangagwa, who was the former head of Zimbabwe’s Central Intelligence Organisation and is seen by many as a ruthless figure likely to continue Mugabe’s policies and opposition to reform. The current vice president Joice Mujuru is thought to be a more moderate proposition, but the security sector is likely to back Mnangagwa, fearful that a moderate presidency would open channels for International Criminal Court proceedings against them for human rights violations and threaten their newly acquired diamond wealth.

Morgan Tsvangirai launched his campaign with a “heavy heart” at the start of July, pessimistic that the lack of electoral reforms and the partisanship of the security forces will ensure a ZANU-PF victory through intimidation and manipulation of the votes. The unity government formed in the wake of the 2008 election violence has failed to diminish President Mugabe’s authority. But ZANU-PF is not invincible. The effects of President Mugabe’s age and health and reformist regional momentum within SADC, combined with increasing attacks from former allies, should give opposition parties the impetus to restructure their own approach and push forward with the constitutional reforms. Even if President Mugabe wins this election, Zimbabwe’s future beyond July 31 has yet to be determined.

Fiona Blyth is a Research Assistant in the Africa program at the International Peace Institute.

About the photo: A protest balloon launches over the Beitbridge, South Africa-Zimbabwe border toward a Robert Mugabe birthday party/election event in 2008. Photo credit: Sokwanele – Zimbabwe/Flickr.