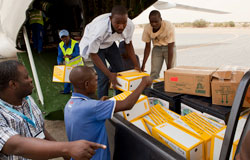 Mali is boldly stumbling toward its first presidential election since the March 2012 coup d’état toppled President Amadou Toumani Touré. Official campaign activities are underway, and the interim government has scheduled the first round for July 28. A rising chorus of NGOs, think tanks, analysts, and even a few presidential candidates have called for a postponement as doubts surfaced about Mali’s ability to hold a credible election.

Yet, the minister of territorial administration (the ministry tasked with organizing the vote) has guaranteed that all necessary conditions will be met. Both the interim president and the UN Secretary-General pledge to maintain the July 28 date and call all actors to respect the results, even if the election is “imperfect.”

The fact that significant obstacles remain to the organization of a presidential election by the proposed date is indisputable. However, field research and interviews with various actors in Bamako and from northern Mali have guided the analysis that the consequences of delaying the election outweigh the benefits. It is also not clear that a brief postponement will resolve the problems the election faces, and it would continue to starve the country from many sources of much needed foreign assistance. Any delay may also contribute to renewed tensions and conflict with Tuareg-led rebel groups in northern Mali (a region they refer to as “Azawad”).

The upcoming election is rife with obstacles that pose problems to a perfect vote. Distribution of the new biometric voting cards NINA (Numéro d’Identification Nationale) began less than one month before voting day and the cards did not arrive in Kidal until July 11. Putting these cards in the hands of Mali’s 6,877,449 voters remains a monumental task.

The Malian administration is only now returning to Kidal since posts were abandoned 17 months ago. Certain candidates allege that the government did not establish proper electoral lists in Kidal, which invalidates any national vote. Youth who recently turned 18 are unable to vote because census administrators did not include them on electoral lists. The date of July 28 may encourage low voter turnout since it falls during the holy month of Ramadan and the height of rainy season. In addition, concerns remain about the voting ability of the over 500,000 displaced persons, many living in refugee camps in neighboring countries.

A botched election may only lead to renewed insecurity, but it is far from certain that a brief delay would solve the litany of challenges outlined above. In addition, most international partners do not wish to continue to support an unelected government. The interim government remains determined to implement the vote on July 28 and international partners have mobilized significant financial and human resources to assist the election. The UNHCR is facilitating the vote of refugees in neighboring countries and the Malian National Assembly adopted modifications to the electoral law N° 06-044 to allow displaced persons to vote.

Ignoring the obvious bet-hedging by candidates requesting a postponement while simultaneously engaging in campaign activities, most of Mali’s major political parties and candidates accept the date. The timeline is also not a surprise. In January 2013, the Malian government scheduled the election between April and July in the Roadmap for Transition. Though Kidal remains challenging, the president of the Regional Council of Kidal, Hominy Belco Maïga, believes the vote in Kidal will be “difficult, very difficult, but possible.”

Difficult weather conditions are also not unique to this current vote. Organizers held the 1997, 2002, and 2007 parliamentary elections during the height of rainy season as well. On top of this, Malians elected every president during the peak of hot season. With such widespread significance, attention, and support, it is difficult to imagine that voter turnout will be comparatively lower than in previous presidential elections. Since the first democratic election in 1992, low voter turnout is a characteristic of Malian elections—never surpassing 40 percent (and bottoming out at 20.9 percent). Malians desire to move the country forward and many see elections as a necessary first step. When asked if the population would accept the results of the July election as legitimate, a Gao native replied, “I think so. Malians are tired of the political instability and of the economic situation of the country.”

Moreover, a recent cabinet reshuffle highlights the urgent need for a legitimate government. According to a leaked note attributed to the International Monetary Fund, the prime minister removed the minister of finance because he resisted approving several dubious transactions that carried significant financial implications. The minister of finance believed that that the interim government lacked sufficient authority and preferred to wait for the installation of the elected government. The prime minister is trying to rush these transactions before the end of his government’s mandate, and many of these deals would benefit senior level politicians and/or their relatives. The minister of finance was replaced by Abdel Kader Konaté, a member of the same political party as the interim prime minister and more likely to yield to political pressure.

Following the coup d’état, foreign donors suspended or cancelled large amounts of bilateral assistance. After the Roadmap to Transition, some assistance to Mali resumed, but the US—Mali’s single largest bilateral donor—is legislatively prohibited from delivering most types of aid until a democratic transition occurs. Even though donors pledged €3.25 billion to Mali at a Brussels conference in May, the release of much of these funds is contingent upon a democratic transition. This external assistance and aid is necessary to rehabilitate the Malian economy and basic social services in the north.

Finally, even if delaying the election was wise at one point, postponement is a serious liability after the Preliminary Accord for the Presidential Election and for Inclusive Peace Negotiations in Mali. The Malian government and the two main Tuareg-led rebel groups based in Kidal, the National Movement for the Liberation of Azawad (MNLA) and the High Council for the Unity of Azawad (HCUA), agreed on two major points: (1) conditions to permit the organization of the presidential election and (2) negotiations to establish a definitive peace and determine the administrative status of “Azawad.” The accord specifically cited that the election would take place in July and that the renewed negotiations to resolve the “Azawad” issue would follow 60 days after the installation of the new government. The MNLA/HCUA only agreed to disarm after these definitive talks. Prolonging the time that the MNLA/HCUA maintains weapons may only raise tensions and contribute to further conflict in Kidal. Furthermore, a postponement may cause the MNLA/HCUA to question the commitment of the Malian government to the agreement. An MNLA spokesperson told France 24, “We never said that we will lay down weapons… We are cautious… We are waiting for a legitimate president.”

The future of Mali seems to hinge on this question of Kidal. Despite the fact that the region contains less than half a percent of Mali’s entire population and the vote is largely symbolic, it is seen as integral for the election. Even if any one candidate won 100 percent of votes in Kidal, it will not significantly affect the overall outcome of the total vote. In reality, emphasis should be placed on parliamentary elections scheduled for November 24, which are much more pertinent and meaningful for the region of Kidal.

Eric Wulf is the West Africa Analyst at the Center for Advanced Defense Studies.

About the photo: At the request of the Malian government, MINUSMA transports electoral kits to the northern regions of Gao, Timbuktu, and Kidal ahead of the presidential elections scheduled for July 28. Credit: MINUSMA/Blagoje Grujic