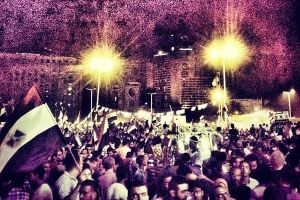 With the dawn of Egyptian nationalism in the late nineteenth century came a powerful slogan: “Egypt for Egyptians.” The phrase captured the anti-colonial sentiment that permeated the Egyptian streets for more than half a century, from the Urabi revolt of 1879–1882 to Gamal Abdel Nasser’s military coup in 1952.

In Tahrir Square last week, as with the start of the Arab Spring in 2011, the phrase was being used again, albeit with a significant alteration: “Egypt for All Egyptians.” This additional adjective conveys a widespread frustration with unrepresentative government—first directed against Mubarak, and now against Morsi.

While some consider Morsi’s overthrow last week to be a blow to democracy, others deem it a “democratic coup.” The reality is not quite as black or white: Egypt is forcing the world to re-examine the scope and limitation of concepts like “democracy,” “legitimacy,” and “coup.” And what started as a call for a more inclusive form of government in Egypt may yet produce the most divided Egypt the world has seen.

Last week’s overthrow of Egypt’s democratically elected leader, inspired by the Tamarod (“rebel”) movement, targeted what many perceived as an undemocratic and exclusive regime. The Muslim Brotherhood’s heavy-handed winner-takes-all politics, its rapid “Brotherhoodization” of the political arena, and its illegitimately drafted but legitimately passed constitution of November 2012 all contributed to this perception—a classic case of democracy turned “ballotocracy.”

However, the call for Morsi’s ouster was far from unanimous: indeed, many Egyptians feel betrayed by the process and have even lost faith in the principles of democratic government, most notably supporters and members of the Muslim Brotherhood.

The removal of Morsi has resulted in a sharp wedge in Egyptian society between a disillusioned Muslim Brotherhood constituency, which includes other Islamist groups, and an unofficial coalition that includes the military, the secular-liberal bloc, Al Azhar (the seat of Sunni scholarship), the Coptic Church, and the Salafi al-Nour Party. This wedge has always existed as a broader Islamist versus secularist divide, in modified forms—most notably with some Salafi groups on the other side. But the division has now manifested itself more radically through a lightening-paced political turnover. And the hyper-nationalist sentiment that the military intervention in Egypt reignited has exacerbated the polarization.

As such, the violent confrontations between rival groups in the past few days, claiming the lives of more than 150 people, came as no surprise. This polarization threatens the very fabric of Egyptian society while throwing the political process into a state of paralysis. Morsi and his supporters—and Islamism more generally—have become vilified in the street, reducing trust between groups to a dangerous low while threatening to alienate a large portion of the Islamist-leaning population. The wedge could also prompt some groups to reclaim violence and resume their activities underground, a path made easier by the increase in arms trafficking and rising crime rate in the Sinai over the last two years. This would represent a significant lost opportunity for Egypt.

Indeed, one of the great benefits of the 2011 uprising was that myriad Islamist groups chose political participation over renegade activity. This phenomenon could now be reversed if the transitional leadership fails to recognize the need for an inclusive political process that includes all groups in Egyptian society, particularly the Muslim Brotherhood. This would require the immediate appointment of a technocratic government, a national reconciliation dialogue, and a roadmap for either the re-drafting or amending of the constitution, which is now suspended.

The Salafi al-Nour party’s positioning on the “opposition” side of the divide on this occasion also remains tenuous, and telling. The waning popularity of the Muslim Brotherhood in Egypt that culminated in Morsi’s ouster has boosted the political standing of the Salafis to unprecedented heights. The Salafis were already a major surprise factor in the post-2011 political scene, securing 28% of parliamentary seats in the last election (second only to the Muslim Brotherhood, which received 38%). In siding with the military’s decision to remove Morsi, they have taken a shrewd position that could make them the star Islamist group in Egypt’s next electoral battle, be it for the parliament or presidency. While the fate of the Muslim Brotherhood remains uncertain, many of its former supporters may now look further to the right, particularly in light of their leadership’s recent failure.

The al-Nour Party’s significant influence on the appointment of an interim prime minister in the last few days is also a testament to its strengthened political clout: so far, it has vetoed the appointment of at least two potential candidates, including the former head of the UN nuclear agency, Mohamed ElBaradei. It is therefore too early to deem the recent events in Egypt an indicator of the decline of political Islam.

To avoid deepening the divide in Egypt, those driving the next phase of Egypt’s transition would do well to adopt a pragmatic and inclusive political approach. Indeed, the next elected president of Egypt could be best served by taking the “Egypt for all Egyptians” slogan to heart. For in Egypt, one may be a Copt, a Salafi, a Shia, or none of the above, but everyone is Egyptian.

Omar El Okdah, an Egyptian, is a Research Assistant at the International Peace Institute.

About the photo: Protesters in Tahrir Square demand the ouster of President Morsi in June 2013, Cairo, Egypt. (Muhammad Mansour)